Villa Monastero is a beautiful villa surrounded by magnificent gardens, located in Varenna, on the banks of Lake Como, Italy. It’s also the place where Kathryn Abajian and I held our writing retreat last month, and where we’re scheduled to repeat it next year.

Come along with me for a visit to learn about the villa and its origins. Maybe you’ll decide you’d like to spend a week here with us too, improving your writing skills, and partaking of the region’s foods, wines and nearby sights. 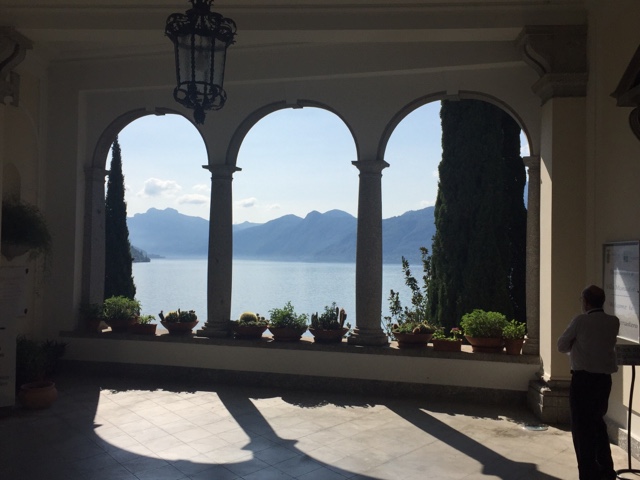 The villa was founded as a Cistercian monastery in 1208, but its mission foundered in 1667, when the nuns left for Lecco, a city to the south. After three years, the villa was sold to the Mornico family, whose weath came from the iron mining industry in the area. The family converted the monastery to a noble residence, renaming it Villa Leliana. It was held by the Mornico family for nearly three centuries, when it was sold at the end of the 1800s to the German sheep owner Walter Kaas. 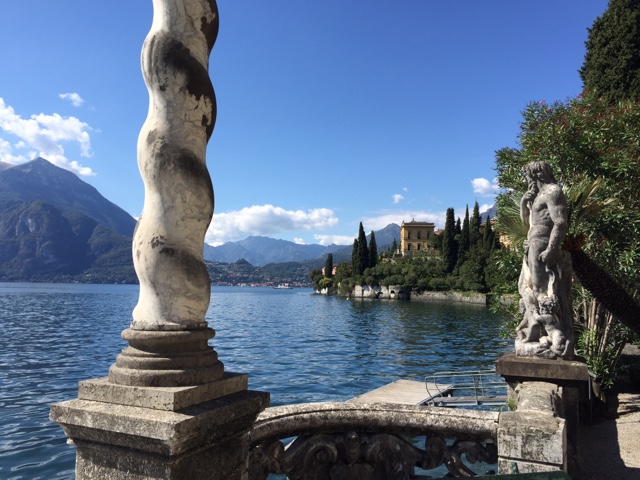 But in the lead up to World War II, Kaas was declared an enemy of the state and was sent back to Germany, while Italy took over the villa. The villa was then used by the elite mountaineering unit of the Italy military called the Alpini, until it was sold in 1955 to biologist Marco de Marchi, who converted the villa into a scientific conference center. 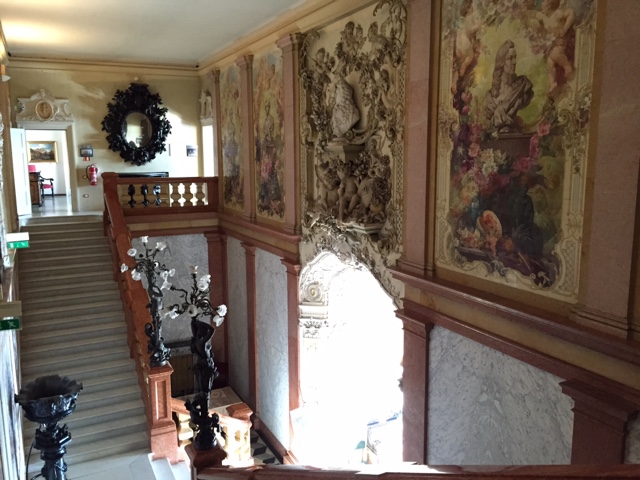 Marchi had no heirs however, and left the villa to the Italian government with the proviso that it be used for conferences of a scientific or artistic nature. This year, we received approval to hold our writing retreat, “Italy in Other Words” at Villa Monastero, after conducting it in Abruzzo for the last several years. 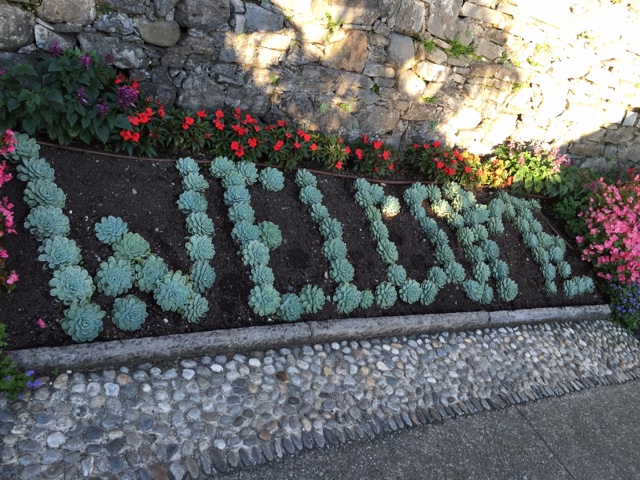 We hold daily sessions in a sun-filled conference room overlooking the lake, surrounded by beautiful artwork created by local artists. 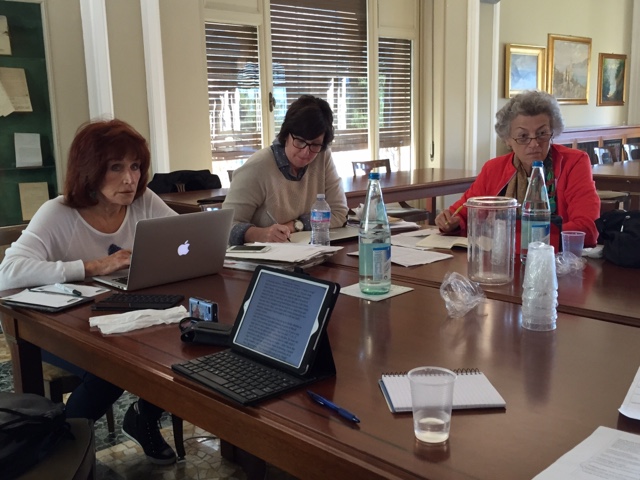 The villa also has a larger conference room that served as a chapel when the nuns occupied the villa, and is the place where Nobel prize winner Enrico Fermi taught his last lesson. 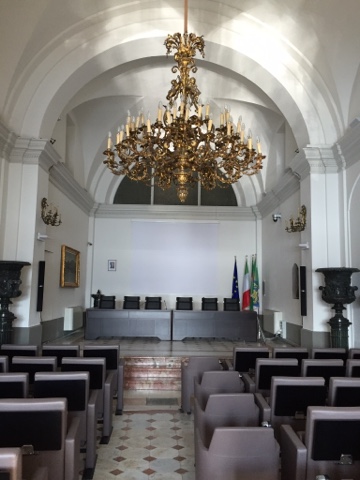 You can see evidence of a religious fresco is a small niche there, dating to the 13th century. 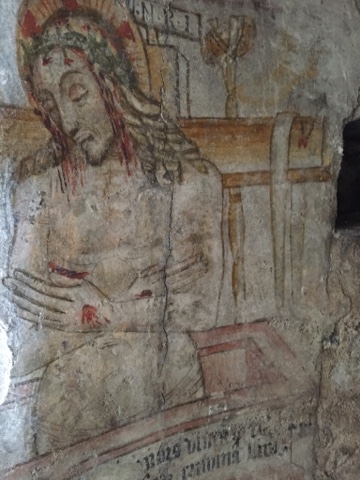 Other rooms in the villa highlight both the Germanic artistic taste of Walter Kaas, as well as highly decorative furnishings bought by de Marchi. 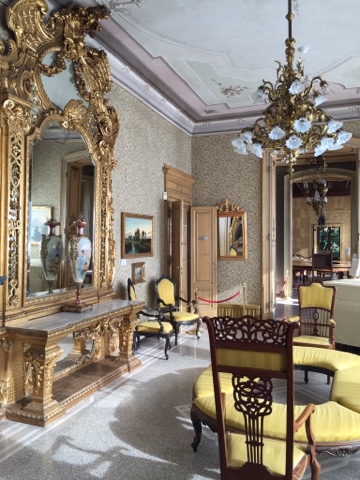 The villa’s extensive gardens, containing thousands of species of plants, are open to the public, but at night, we writers have the beauty of the grounds and the silence of the lake to ourselves. 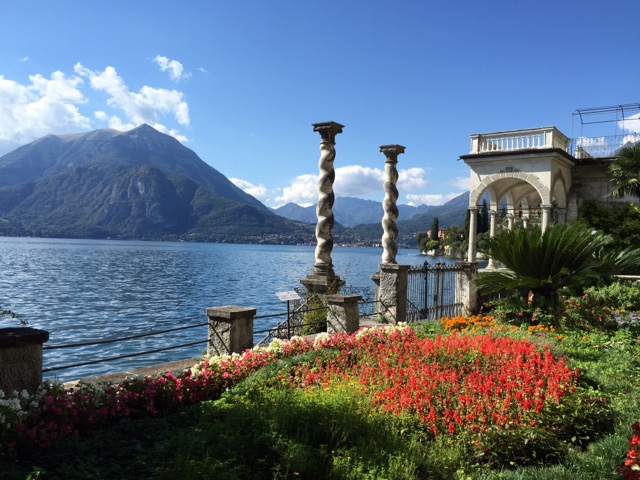 Most bedrooms have modern furnishings, some with views of the lake, and a few have balconies facing the lake. Sign up early to get priority for one of these. 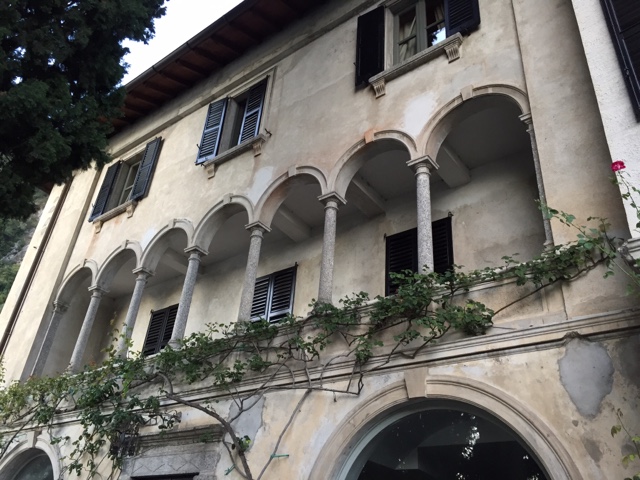 Writing instruction is in the morning, and you can set up your laptop by the lake in the afternoons to soak in some inspiration from the peaceful and lush surroundings. 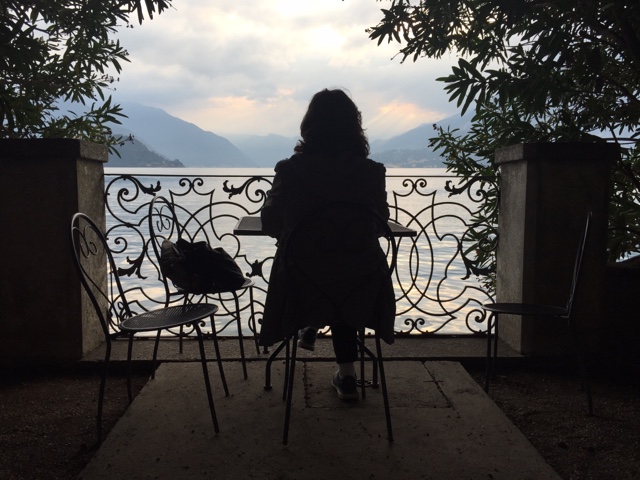 If you need a break from writing, the town of Varenna has a lot to offer, with inviting shops and cafes. 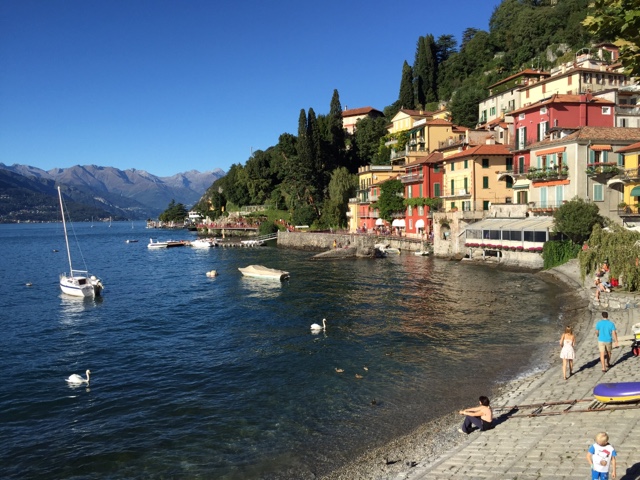 Come with us if you like, on an afternoon visit to Vezio, and step back to the 11th century and a castle that was once home to Teodolinda, queen of the Lombards. 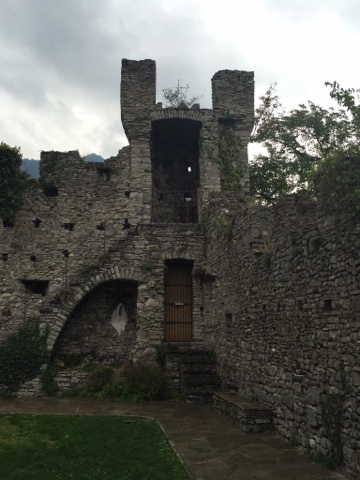 From the castle, you get a magnificent view of the lake and the rooftops of Varenna below. 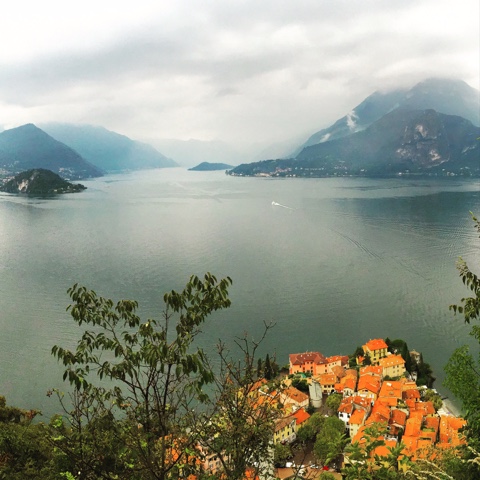 We also eat well on our retreats, and taste local wines and cheeses, like this taleggio. 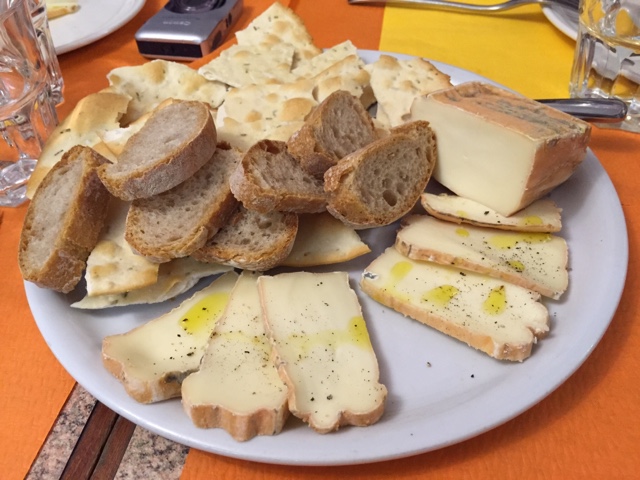 Dinners are all special, and we try different restaurants each night. 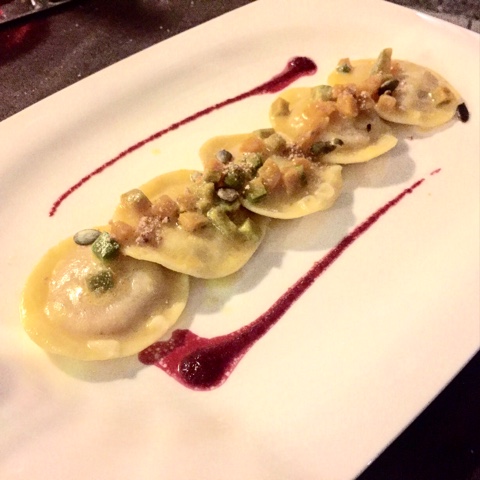 If you’d like to go further afield one afternoon, we’ll take you on the ferry to Bellagio, where the streets are as quaint as the shops are prolific. 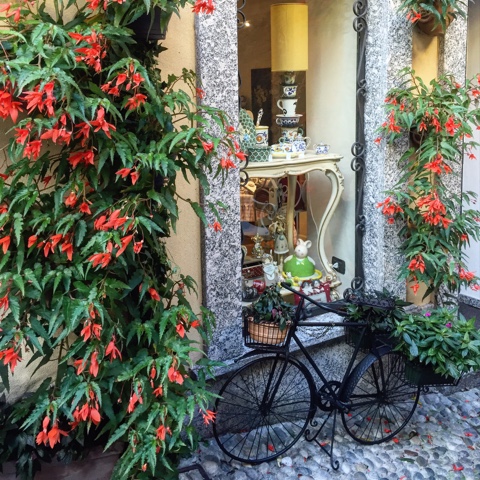 You can even try your hand at watercolor, whether you’ve got experience or not. We can arrange a lesson for you. 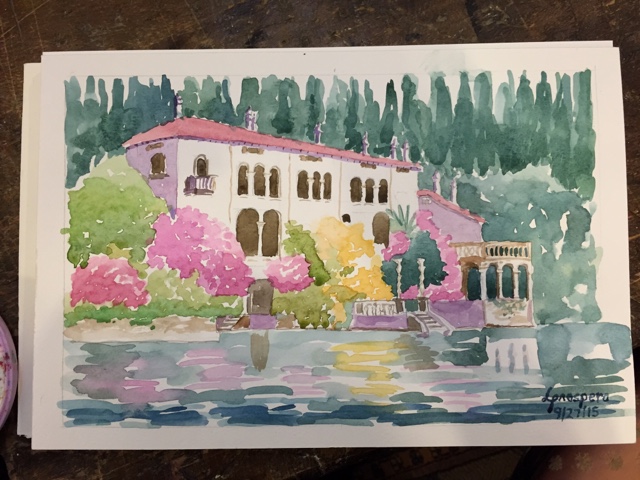 It may seem early, but it’s not to soon to start thinking about reserving a spot for next year’s retreat at Villa Monastero.  We plan to hold it from September 18-24, 2016. Check out our website at www.italyinotherwords.com for more details. 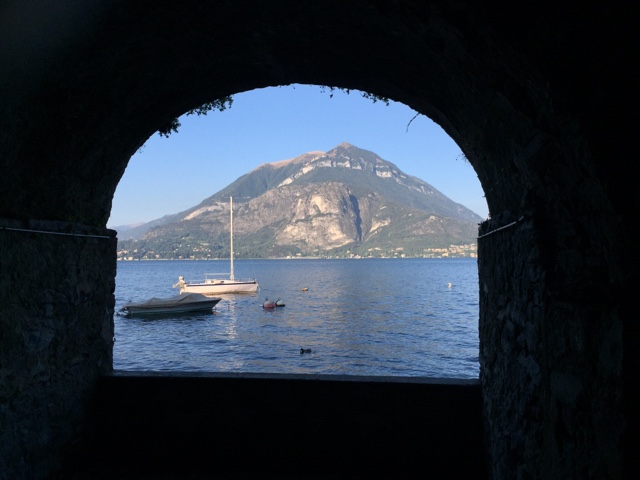 If you were baking in the 1970s, no doubt you came across…

I know what you're thinking -- Who needs a bowl of chowder…

How To Make Candied Violets