If you’re in Paris and your pocketbook allows, I’d be among the first to say treat yourself to an evening of haute cuisine at one of the city’s top restaurants.  Indulge in dinner at Hotel Meurice’s dining room, for instance, and you’ll feel like you’re among the privileged in 17th century Versailles, complete with rococo decor and waiters who gather at your table to ceremoniously release the silver domes atop your plates in a synchronized flourish. It’s an experience that will stay with you forever. 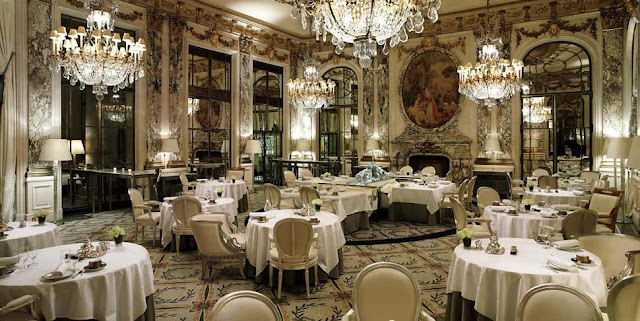 But when you want a simple meal to nourish the soul and stomach, especially at lunchtime, there are a plethora of places to pop in for a quick bite. Paris is loaded with quaint bistros offering traditional fare at a reasonable price. Typical of them is the leek and potato soup I ate at one place in Montmartre. It wasn’t quite enough though, so I ordered a platter of bleu cheese accompanied by a small salad and bread. Savory tartes, or quiches are everywhere, such as this tarte with three cheese I ate at the pavillion in the Luxembourg gardens: And that was after a little snack of roasted chestnuts at the entrance to the gardens. By now, you know I’ve got a sweet tooth that longs to be satisfied, so I gave in every day. This cup of tea and berry-topped mini charlotte was obviously meant for me.

This small oval treat of tender chocolate cake, filled with cream and cherries, topped with a luscious chocolate ganache, just melted in the mouth. Put the butter and olive oil into a large, heavy pan and saute the leeks, onion and garlic until translucent. Add the potatoes, white wine, chicken stock, salt and pepper and cook at a low simmer, with the lid askew, for about 1/2 hour, or until the potatoes are fork tender. Remove the stems of the fresh thyme. At this point, I put the mixture into the blender, a small amount at a time. Be careful though, because it can easily splatter all over you and the kitchen. Instead of using the lid in its entirety, I remove the little plug that’s in the center of the lid, and cover it with paper towel while the blender is going. It gives the hot liquid a way to release the steam without “blowing” off the lid. Some people like to use a stick blender, but I prefer a counter-top blender – your choice.

Quick, before cherries are still in season (not much longer here in…