Mention the word “soufflé” and you’re likely to strike fear into the hearts of  most home cooks. Conquer your fears and pick up your whisk, folks, because you’re laboring under a misconception.  Soufflés are not that hard to make. If you can beat egg whites, you’re halfway there. The other half is making the sauce, one that contains butter, flour and milk  – similar to a béchamel, but it also contains egg yolks. Those are the basics for any baked soufflé, but of course what you add to that base can be as different as cheese is from chocolate. The techniques are all the same. 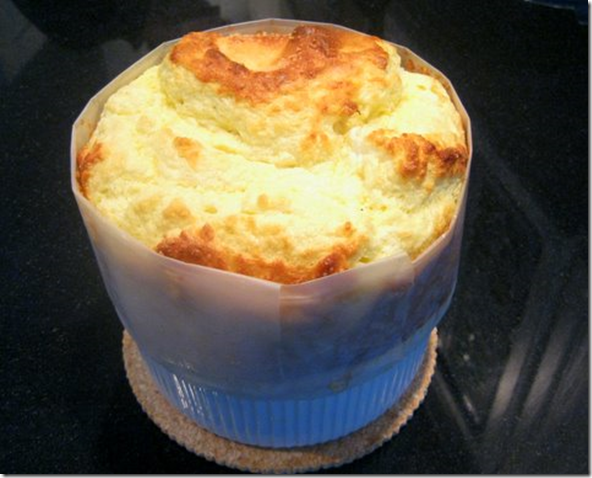 I have always followed the cheese soufflé recipe in Julia Child’s “Mastering The Art of French Cooking.”  Her recipes are long but not because they’re difficult. She just explains every minute detail, and that’s what make her recipes no-fail every time.  I noticed that the Barefoot Contessa Ina Garten has a cheese soufflé recipe in one of her cookbooks too, and the ingredients, quantities and cooking directions are exactly the same as Julia’s. Imitation is the sincerest form of flattery, they say…. The only difference between mine and Julia’s is the gorgonzola cheese (my nod to Italy) and size of the soufflé dish. She suggests using a 6-cup soufflé dish, but for a really show-stopper of a presentation, use a 4-cup dish and bake it with a buttered wax paper collar taped to the dish. When it rises, it will climb high above the rim. Remove the wax-paper after taking it from the oven and serve immediately. Then take a bite of this gorgonzola cheese soufflé. It’s as ethereal as a sigh. 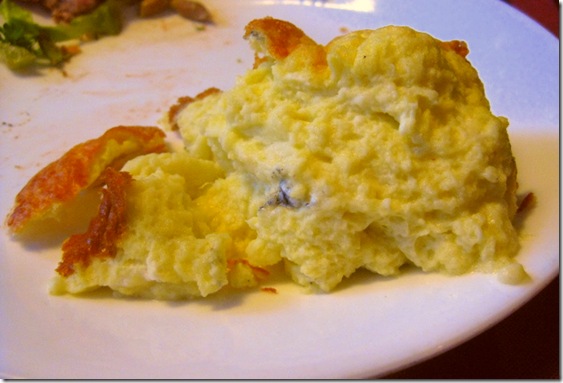 Don’t like gorgonzola? Think of a soufflé the way you think of a frittata – it’s a blank canvas waiting for your personal touch. Got a bit of leftover ham, or bacon, or asparagus or anything else in the refrigerator you want to use up? 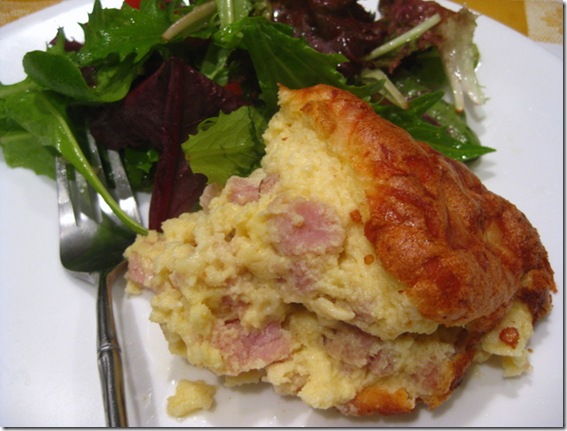 Follow the same recipe to make individual soufflés instead of one large soufflé. Just bake them for a little less time. 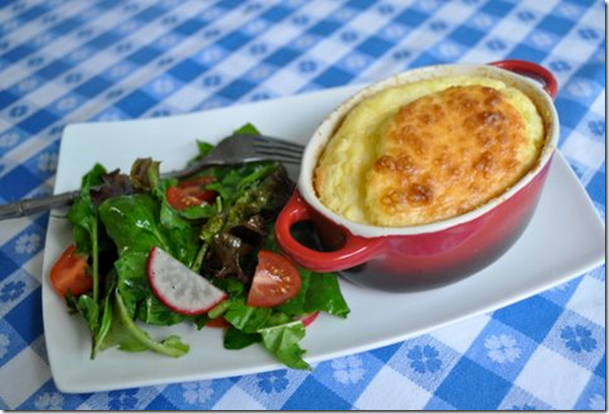 Here are some photos of what the egg whites should look like after you’ve finished beating them. They should be stiff, but with some luster to them – not so dry they look like Styrofoam. 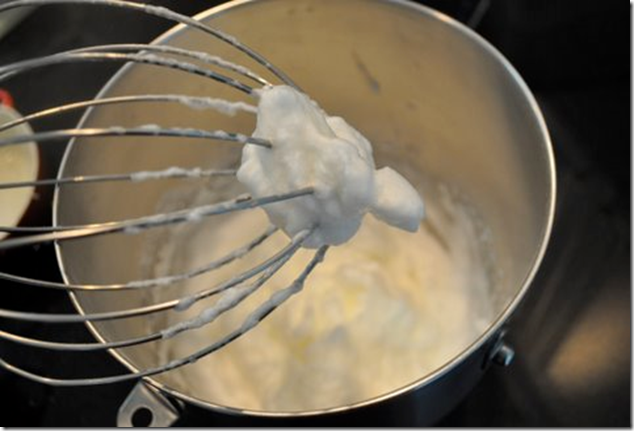 This is the base mixture of butter, flour, milk, egg yolks. The cheese gets added to this, then the egg whites are folded in. I poured the mixture into four oven-proof dishes that measured slightly more than one cup each. They don’t have to be the traditional round shape, as you can see. 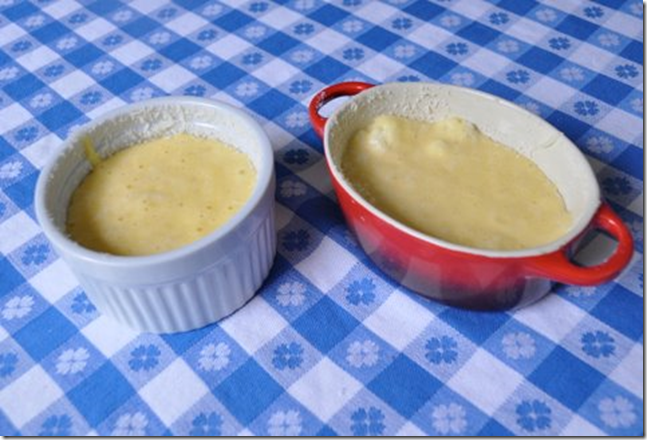 They came out of the oven looking like this: 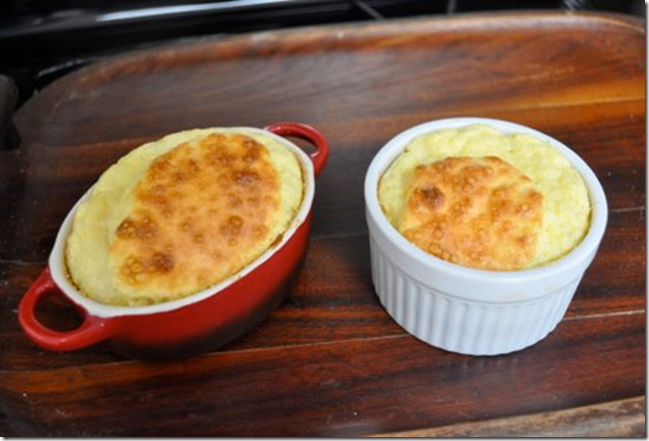 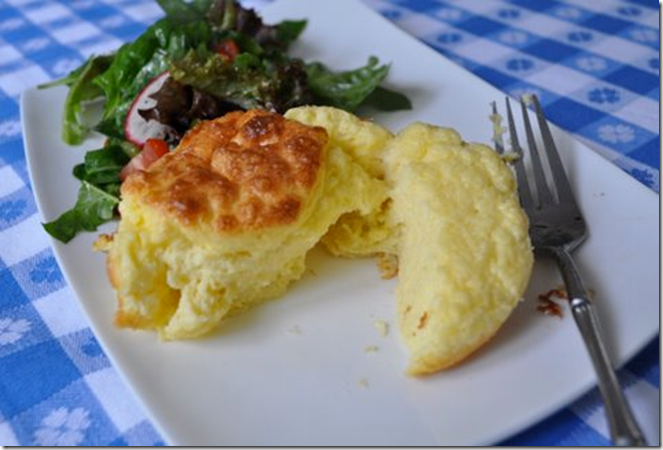 Generously butter a six or four-cup soufflé dish. Sprinkle with the grated Parmigiano Reggiano to cover the bottom and side. Set the oven rack in the lower third of the oven, and preheat to 400 degrees Fahrenheit. To make the sauce:
Over moderate heat, melt 3 Tbs butter in a saucepan; Stir in the flour with a wooden spatula or spoon and cook over moderate heat until butter and flour foam together for two minutes without browning. Remove from heat; when mixture has stopped bubbling, pour in all the boiling milk at once. Beat vigorously with a wire ship until blended. Beat in the seasonings. Return over moderately high heat and boil, stirring with the wire whip, for one minute. Sauce will be very thick. Remove the sauce from the heat. Whisk the egg yolks into the hot sauce one by one, then add the cheese. Transfer sauce to a large bowl, and set it aside. To finish:
In a clean bowl and with clean beaters, beat the egg whites to stiff peaks. Scoop a quarter of the egg whites into the bowl with the sauce, and stir together with a wooden spoon. Turn the rest of the egg whites on top; rapidly and delicately, fold them in with a rubber spatula. Pour the batter into the prepared baking dish, and use a spatula to trace a circle in the top of the batter, just inside the rim of the dish. This will help the soufflé to rise freely. Place the soufflé in the oven, and turn the oven temperature down to 375 degrees Fahrenheit. Bake about  30 to 35 minutes (without opening the oven), until the soufflé has puffed over the rim of the baking dish and the top has browned nicely.  If baking in small one-cup molds, they will need only 15 to 20 minutes in the oven. Serve immediately because it will deflate rapidly. Serves four.

OK, so you can only serve ham sandwiches and bean soup so…