I’m tall – a blessing when you need something from a high shelf, but not so much on airplanes or in the backseats of most cars.  But on a recent trip to California, heading back to my friend Jeannette’s house in Santa Barbara from the Malibu Getty, I was happy to cede the front seat to her and my buddy Jan. Why? Because my head was buried in a book called “A Handful of Herbs” that Jeannette had purchased at the museum shop. I was mesmerized by the photos, recipes and decorating ideas using fresh and dried herbs.  This is one of the recipes from the book and I’ve already made it on three different occasions, including Easter, where it appeared as one of the appetizers. I used fresh bay leaves from a plant I’ve nurtured indoors all winter, but fresh bay leaves may be hard to find for most people here on the East coast. 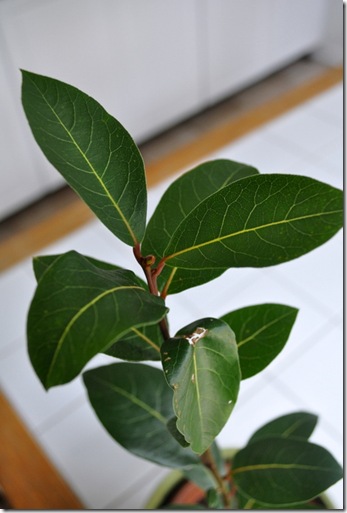 When we lived in Italy, fresh bay leaves were plentiful, and you’d find them growing as hedges in many public places. I always knew where to snip a few leaves when I needed them for a recipe. I won’t ever have a bay leaf hedge in New Jersey, but I’m hoping that in trimming my small plant, two new side branches will emerge sometime soon. I couldn’t bear to cut any more of my fledgling bay leaf plant, so the third time I tried it with chives. I can envision it with sage leaves too,which are easy enough to come by in New Jersey. 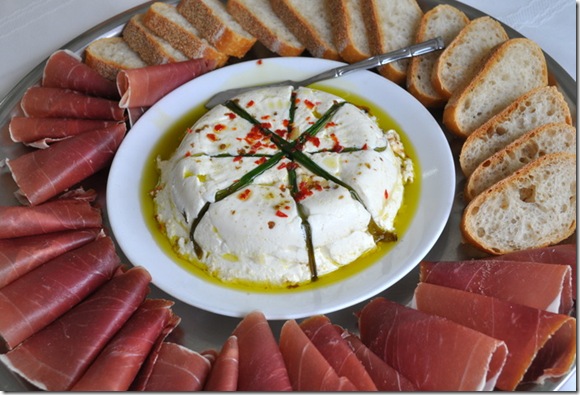 I deviated from the recipe slightly, placing the leaves in a decorative fashion, rather than crushing the leaves and tucking them under the ricotta. The recipe also calls for serving the cheese in the bowl as the book illustrates, rather than flipping it over as I did. 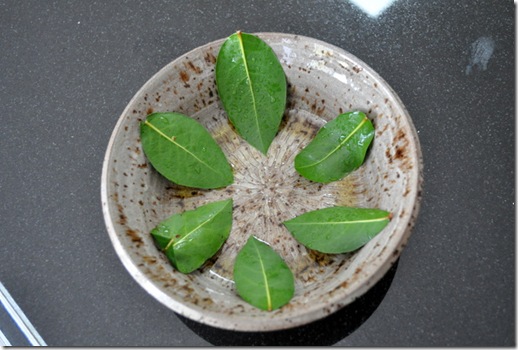 Making the basil oil that gets drizzled on top is the most time-consuming part of the recipe, but even that doesn’t take very long. 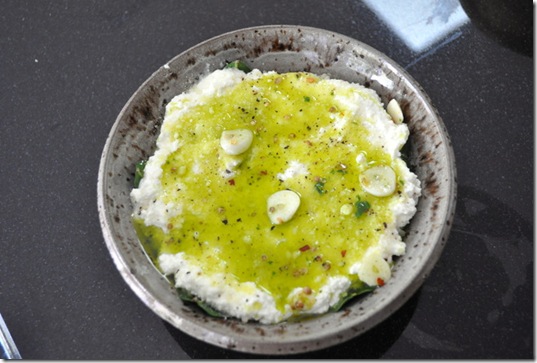 Then bake it in the oven for 20 minutes. You can serve it as is, or take it a step further and flip it onto a plate as I did. But don’t try to do it hot out of the oven or you’ll have a mess on your hands. Wait until it’s cooled a little, then place a plate over the bowl and flip. It’s best served at room temperature or slightly warmed. 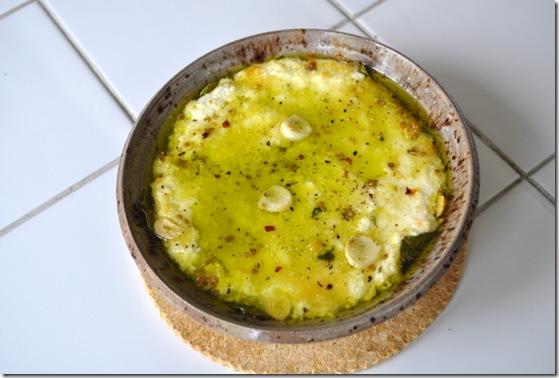 Sprinkle some more basil oil on top, along with bits of red pepper for color, and serve with crackers or slices of bread. 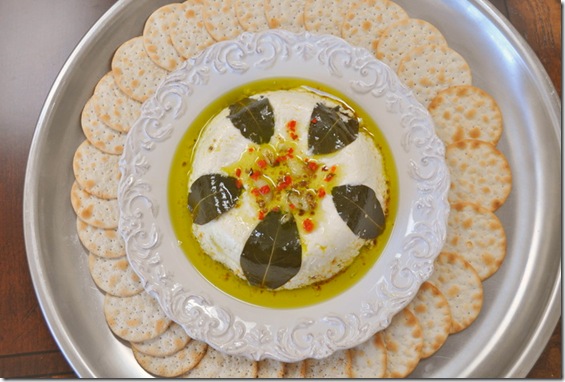 Hope you all had a Happy Easter, if that’s what you celebrate. As I write this, I’m looking out my window at pale pink crabapple blossoms, cascading in the wind like a scene from Disney, all the while wafting their sweet fragrance into my home. The harsh winter gives way to the beauty of Spring and to a renewal, an object lesson in so many ways. 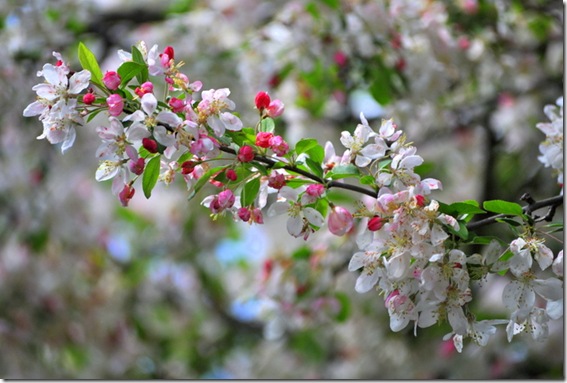 Baked Ricotta Printable Recipe Here Based on a recipe from “A Handful of Herbs” by Barbara Segall, Louise Pickford and Rose Hammick

Put the ricotta in a foil-lined baking dish. Put the garlic, chile, coriander seeds and oil in a bowl and stir. Trickle the oil mixture over the cheese and tuck the bay leaves underneath. Sprinkle parmesan, salt and pepper over the ricotta and bake in a preheated oven at 375 degrees for 20 minutes, basting halfway through the cooking time. Serve the ricotta spread onto toasted bread sprinkled with basic oil or salsa verde. Serve topped with a little grated parmesan. Note: I found the foil was unnecessary. I laid out the bay leaves, put only half the ricotta in the dish, then sprinkled with a bit of parmesan, and drizzled with the oil, garlic and spices. Then I spread on the remainder of the ricotta and a bit more parmesan, followed by a last trickle of the oil mixture. Basil Oil

Put the olive oil and basil in the blender and give it a whir – not to pulverize but just to break up the leaves a bit. Place the mixture in a saucepan and cook for several minutes. Let it sit for a bit – maybe 15 minutes or a half hour – to absorb all the flavors, then strain and use the oil, discarding the solids.