As much as I enjoy sandy beaches and mild climates, I’d be hard pressed to give up the four seasons, even with all the shoveling required after the recent snowfall here in New Jersey. There’s something warm and cozy about a pot of soup on the back burner and bread baking in the oven that doesn’t feel quite the same when the thermometer is hot enough for gin and tonics and grilled steaks. No, for now, I’ll put up with the shoveling and keep warm in the kitchen. Obviously if you don’t like chestnuts, you won’t like this soup. But if you do….. well, you’ll love this soup. I wish I could tell you where I got this recipe, but it was handwritten on a paper placemat tucked among the scores of recipes I’ve collected over the years. I adjusted it somewhat in any event, so it’s not exactly the same as the one I wrote down. If you have ever roasted chestnuts, you know how pesky it is to dig the meat out. Well, I’ve just been clued in to a very easy way to slip the buggers from their shells, and it doesn’t even involve making the traditional little “x” on the shell. Click here to view a video from Philip Rutter, founding president, The American Chestnut Foundation showing you how. It lasts about 15 minutes, but it’s very informative. But to give you the idea in a nutshell (sorry, couldn’t resist folks), what you have to do instead is slice the raw chestnuts in half, then drop them into boiling water. 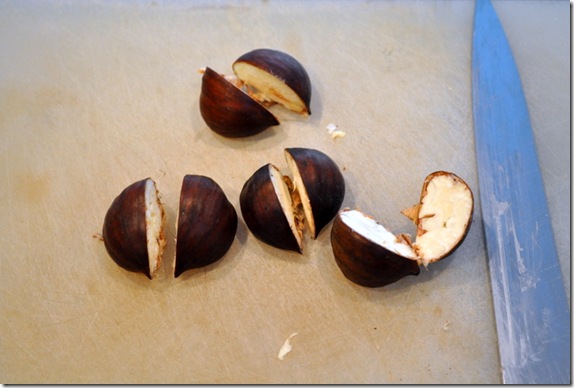 Leave them in for only a couple of minutes, then take them out and work with them while they’re warm. They’re harder to peel after they cool. Take a small spring-loaded pliers in one hand (actually mine weren’t even spring-loaded) and hold the chestnut in the other. Use the pliers to grasp the shell and squeeze – the meat should loosen immediately. Some of them may break into small bits, but in general they’ll come out so much more readily than the traditional method of cutting an “x”, roasting them and getting frustrated when most of it falls apart. 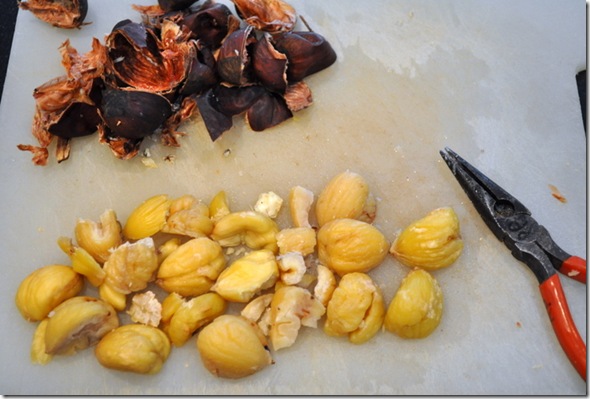 At this point, the chestnuts won’t be cooked, but you can proceed with this recipe and they’ll cook in the broth. If you want to eat them as a snack, just pop the peeled chestnuts onto a baking sheet and roast in the oven for another 15 minutes or so, depending on how large they are. Be careful not to leave them too long, or they’ll dry out quickly and become hard as a hockey puck since they won’t have their protective coating. Chestnuts are also sold in jars and in foil bags already fully cooked, and you can probably use those instead if you like. Naturally, the ones you buy fresh are going to taste the best. Take it from this little squirrel friend outside my kitchen door, who seemed to like his chestnut well enough to hoard it under the snow. Hope it’s still waiting for him when the snow melts. 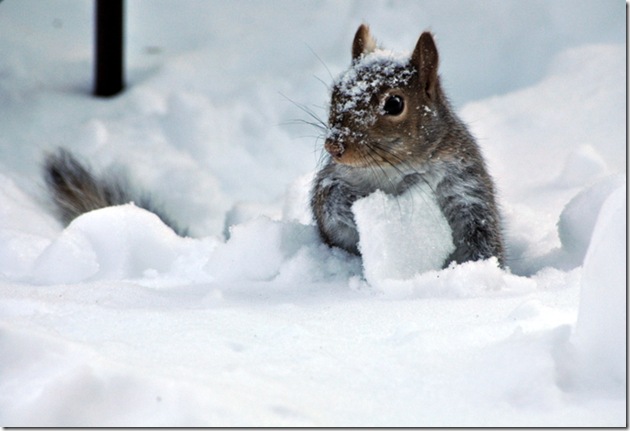 Melt the butter and sauté the leeks, carrots and chestnuts for about 10 minutes. Add the chicken stock, wine, salt and pepper and continue to simmer on low heat, partially covered, for another 20 to 30 minutes or until the chestnuts are fully cooked.  Put everything in the blender to puree, then reheat, adding cream if desired. Serve with a dollop of sour cream.

There was always fried baccala on Christmas eve. And fried smelts. And…

Strudeling through the Val Gardena