This is not the leg of lamb I had intended to make for Easter. But since the weather here was unusually warm, I decided to set aside my friend Anna’s six-hour roast lamb recipe for one that wouldn’t heat up the house at all. It’s cooked on the grill, which seemed just right for a day when everyone wanted to be outdoors. Anna’s masterpiece will have to wait for a cooler day – and I’m sure there are bound to be more of those down the road. This recipe is inspired by one in a Julia Child cookbook called Julia Child & Company. I’ve made it at least a dozen times and it’s like all of Julia’s recipes – delicious and fail-proof.  Julia labels the marinade as optional, but I’d say it’s crucial for the best flavor and tenderness. You don’t have to be exact in the measurements – it’s not like baking a cake. So if you want more soy sauce, more rosemary, less garlic or any other combination – just adjust to your preference. One of the most crucial parts is to remove as much fat as possible from a boned leg of lamb.  It helps get rid of the sometimes “gamey” lamb taste. Have the butcher butterfly it also, which means that it will be spread out in a large piece and cook in half the time of a leg that’s not butterflied. Sometimes one or two of the pieces will separate and I just skewer them with some metal or wooden skewers. Even if the butcher has trimmed most of the fat, I usually have to remove even more fat at home as well. You can see the amount of fat I removed at left, and the marinating meat in the orange plastic container. 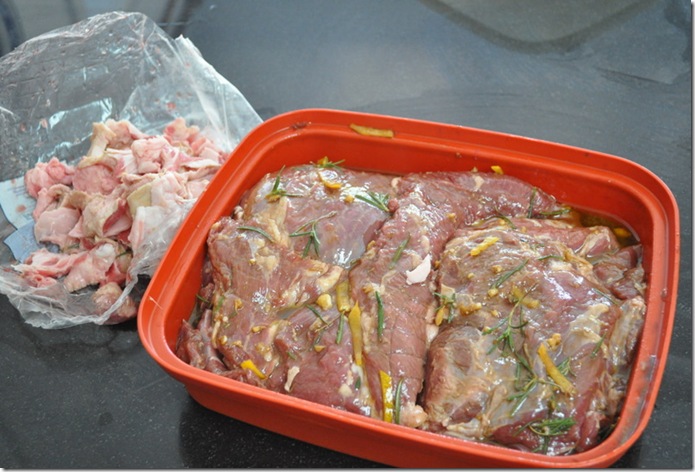 In Julia’s recipe, the meat sits in the optional marinade for at least an hour,  but I give it a couple of days minimum. I’ve even kept it in the marinade as long as four or five days and it develops even more flavor and becomes more tender. Cook it on the grill at a high temperature to sear it first, then lower it to finish cooking. Bring it indoors and let it rest at least 15 minutes before slicing. 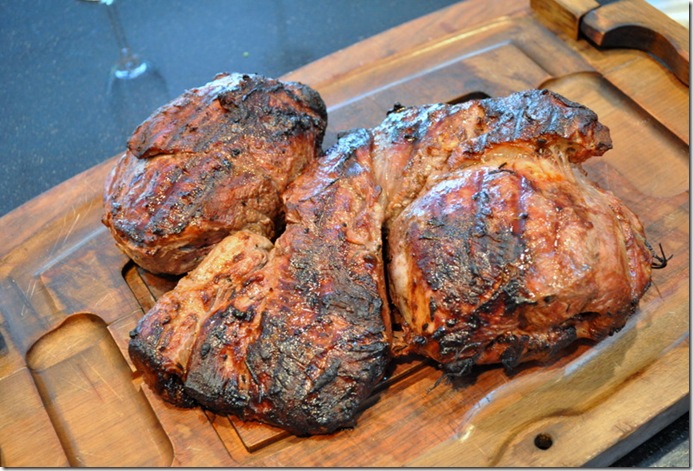 If you don’t have a grill, Julia says you can roast it in the oven, then finish under the broiler. Instructions below. Here are a few of the other things we served with it for Easter dinner: Munchies with prosecco: Braided Easter Bread (fourth attempt in a week) 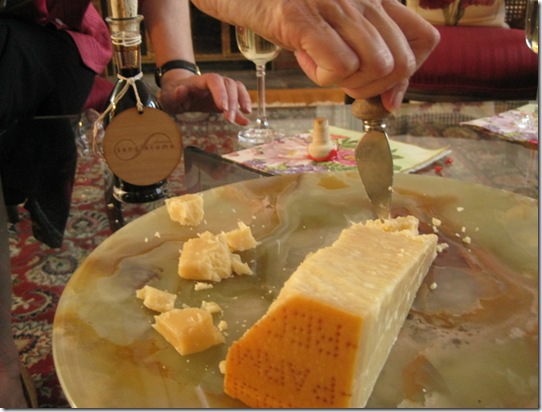 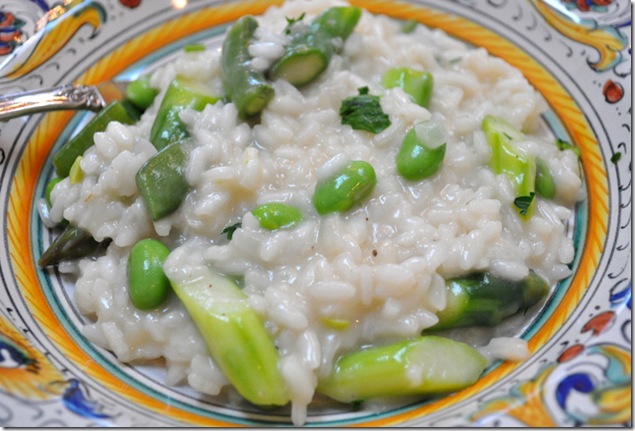 With the lamb (We sliced up only half the roast and it was plenty for seven people.) 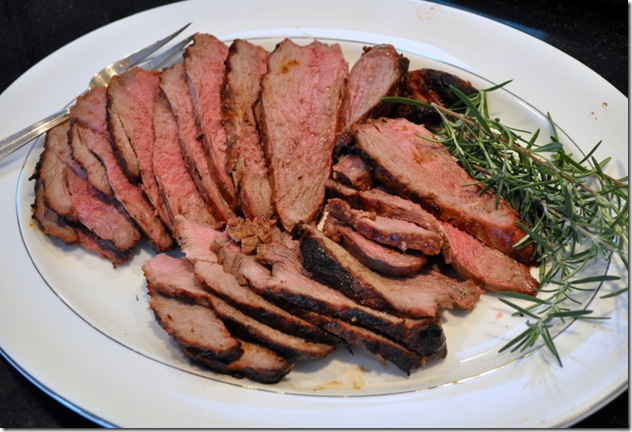 wild mustard greens picked in a nearby field: 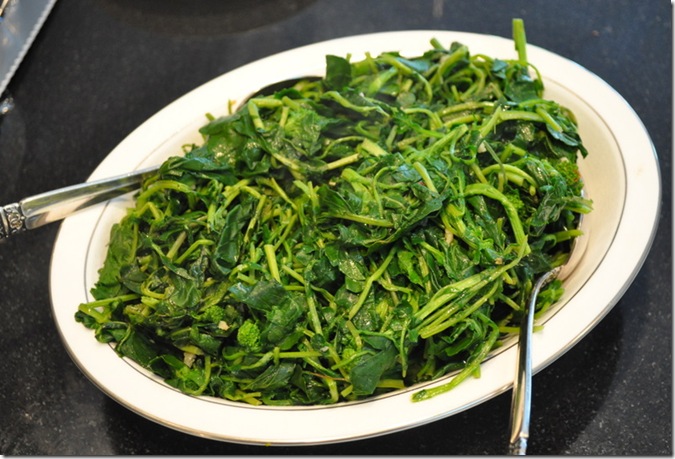 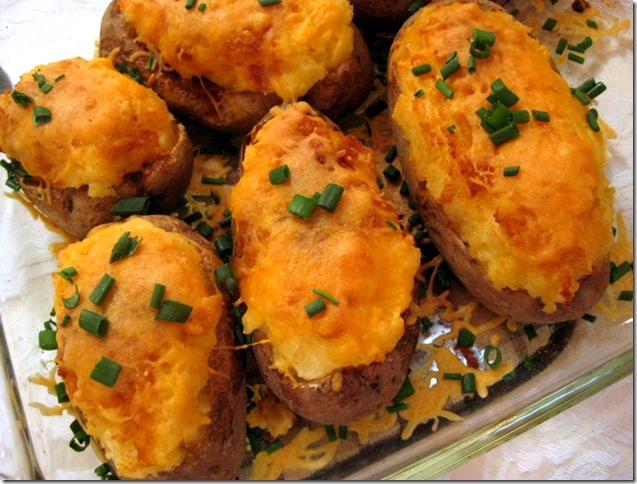 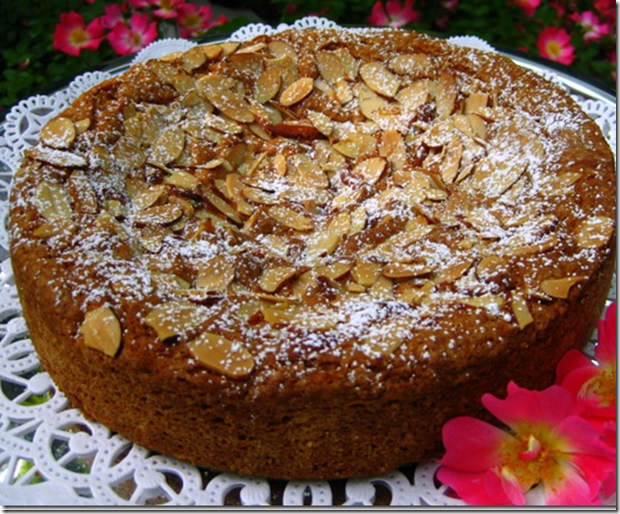 and of course, chocolate-covered Easter eggs: 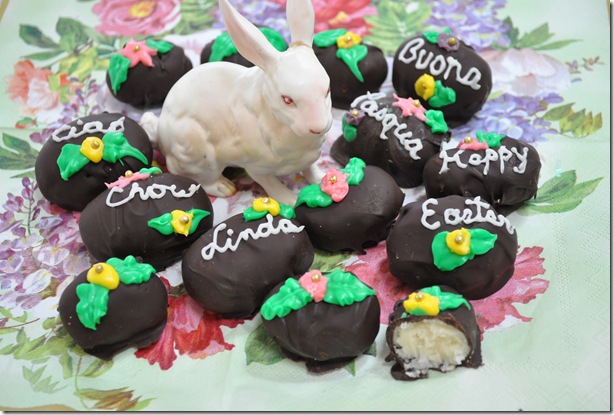 Boned and Butterflied Leg of Lamb printable recipe here 1 boned and butterflied leg of lamb – about four or five pounds (serves at least 12) marinade: 1/4 cup olive oil 1/4 cup soy sauce juice of 1 lemon, plus grated peel 2 or 3 sprigs of rosemary 3 or 4 cloves garlic, mashed Slash the lobes in 2 or 3 places, making long cuts about 1 1/2 inches deep; otherwise the thick pieces will take longer to cook than the rest. Then to keep the roast in shape, push long skewers through the wide sides of the meat, one through the top third, ad the other through the bottom third.
Rub the lamb with the marinade and keep it in fridge for as long as four or five days, turning over occasionally.
Cook on the grill, brushing with oil, for 30 to 45 minutes, turning every 5 minutes or so. Start it on high and sear it first, then lower to finish cooking.
For rosy red meat (med. rare), cook to 125 degrees on a meat thermometer. Remove lamb and let it rest for about 10 to 15 minutes before slicing.
To roast in the oven: place in a roasting pan in preheated 375 degree oven.  Roast for 20 to 25 minutes or until it reaches 120 degrees with a meat thermometer. Baste with oil and set for 2 to 3 minutes under a preheated broiler to brown lightly. Let sit for 10 to 15 minutes before carving.   grilled lamb, barbecued lamb, Easter, risotto, mustard greens, baked stuffed potatoes

Today we're taking a trip to Trieste, Italy, where I had the…

I know, I know. It's the third fig recipe in a row…