This is the sort of stuffed bread that people in Italy make to take on a picnic lunch for Pasquetta – the day after Easter when businesses close down and everybody has a vacation day.  Many people head to the countryside on Easter Monday with baskets of food and have a relaxing day soaking in the spring weather amid family and friends.  You may not have the day off from work here in the U.S., but you can still have this braided bread in your lunch sack. The eggs are symbolic for Easter, but you can make it without the eggs and it would be delicious to serve with drinks before a dinner party any time of the year. I was inspired to try it after seeing it on an Italian TV cooking show called “La Prova Del Cuoco.”  But I had my problems with the recipe as given on the show. It called for the use of semolina flour and I followed the instructions diligently.  After the first rising, I could tell something was not right since the dough seemed to have risen and then fallen back down in the bowl. I continued to follow the recipe, knowing it would need a second rise anyway after I had added the fillings. I proceeded just as the cook on the show had done, rolling out strips of dough and filling them with the three different ingredients – green olives, soppressata and cheese. I used a sharp provolone cheese instead of the caciocavallo in the original recipe.  Divide the dough into three equal sections and one small section (you’ll find out what to do with that later.) You lay the ingredients down the center of the rolled out dough strip. 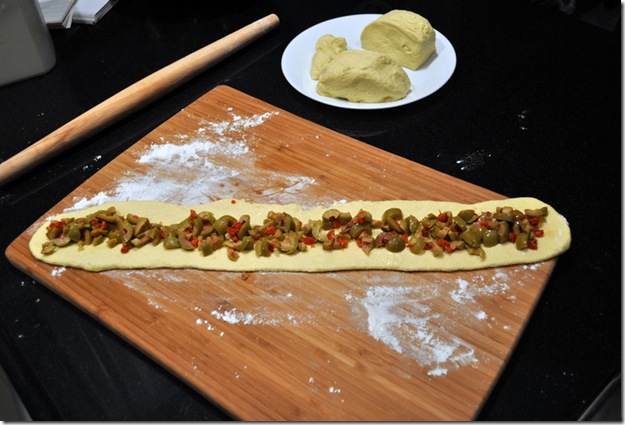 Then you pinch the edges shut to seal the dough: 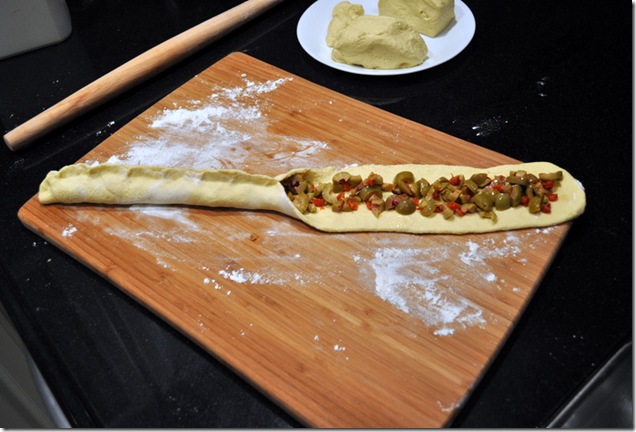 You do the same with all three strips of dough and you can use other fillings instead of these. For Good Friday, I substituted chopped and sautéed mushrooms for the soppressata.

Then brush the three filled strips with an egg wash, and sprinkle on the toppings: poppy seeds, sesame seeds and pumpkin seeds. 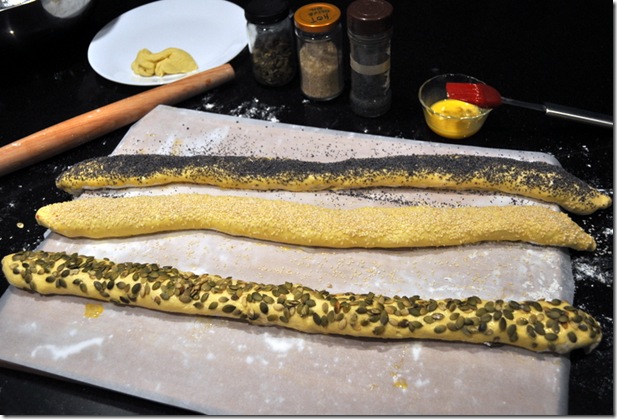 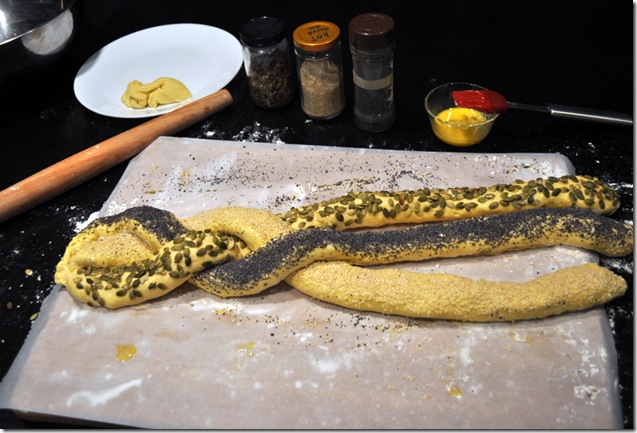 Make sure you pinch the ends together. 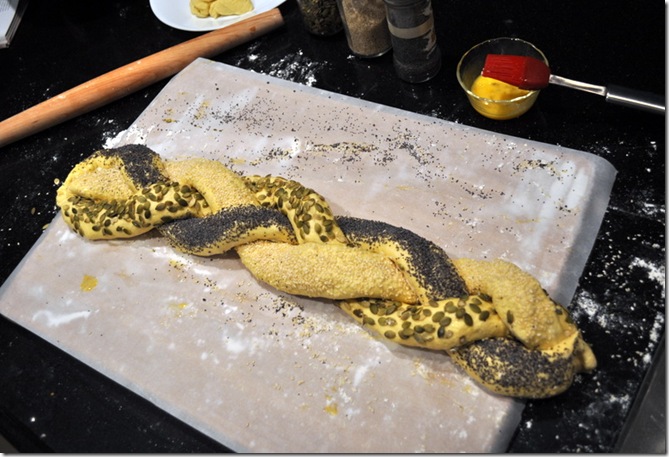 Fashion it into a circle, nestle some eggs inside and cover them with little strips of dough that you reserved. You can see I’ve done it all on top of a piece of parchment paper that’s resting on an over-turned baking sheet. It makes it easier to transfer right to the oven when it’s ready for baking. Here’s the semolina loaf after I had let it rise for about two hours. It looks pretty, but it hardly rose at all. 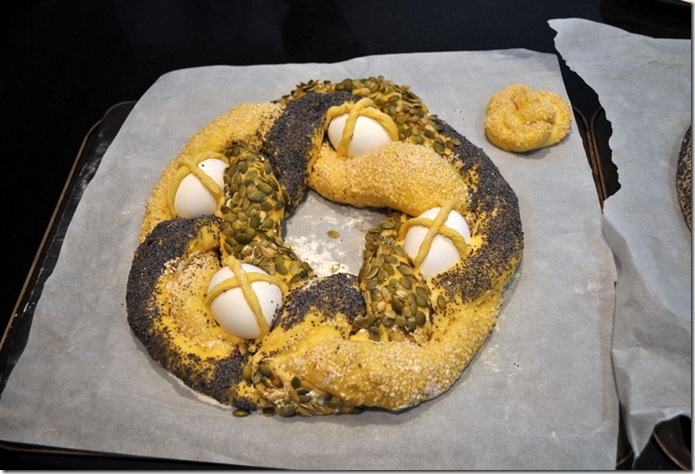 I was starting to get worried, since my Italian chit-chat group was arriving in a few hours. So I went to work on a backup plan. I didn’t want to give up the idea of the braided bread and I had enough ingredients to make another (well, truth be told, I did have to send my husband to the store for more olives and cheese). So I made a second one using 3 parts bread flour and one part semolina flour. By now the first one – the all semolina one (above) – had been sitting around for about four hours and the second one (below)– the one with 3 parts bread flour and one part semolina flour – only two hours. 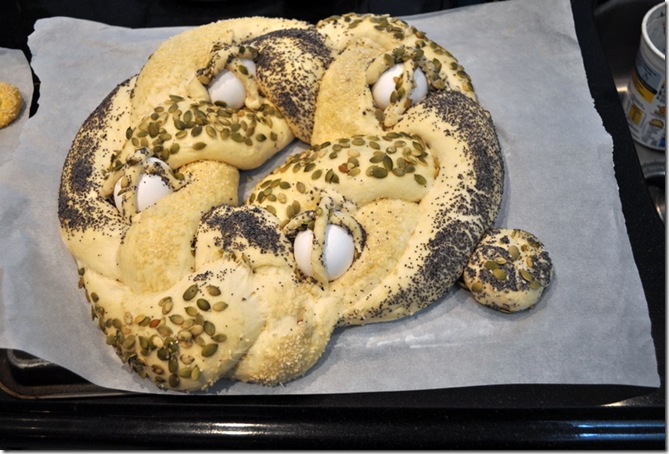 Here’s a side-by-side look at the two of them. All semolina on the left and mixed flours on the right. A big difference, no?

So I baked the mixed flour bread braid for the ladies and here’s how it looked from the oven. It was great, with a nice lightness to the texture and good flavor from all the ingredients. Some of the cheese did squish out through the sides though, but the crusty hard melted cheese was mighty tasty. 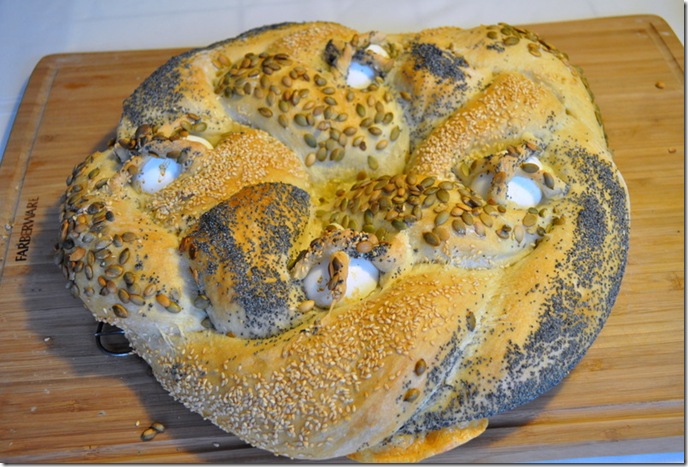 I later baked the all-semolina loaf and it turned out dense and heavy as a brick. But it wasn’t a total loss. A neighbor’s cat found it on our deck and had his own pre-Pasqual feast. He didn’t seem to mind that it hadn’t risen properly: 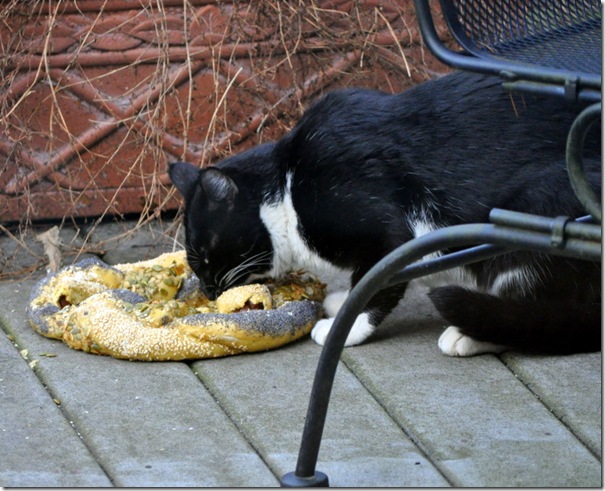 Postscript: I made this a third time and the third time was NOT the charm. Like the Roman Empire, this one too seemed to rise and fall. It may have been my fault since I used my oven as a resting place for the dough to rise. Even though the oven was turned off, I had heated it to 180 degrees before turning it off. I may not have let it cool down enough before adding the bowl containing the dough. As a consequence, the dough behaved strangely (remember yeast is a living organism) and was difficult to handle. The finished product was still edible but not the light texture as the second one.  Here are a couple of shots: 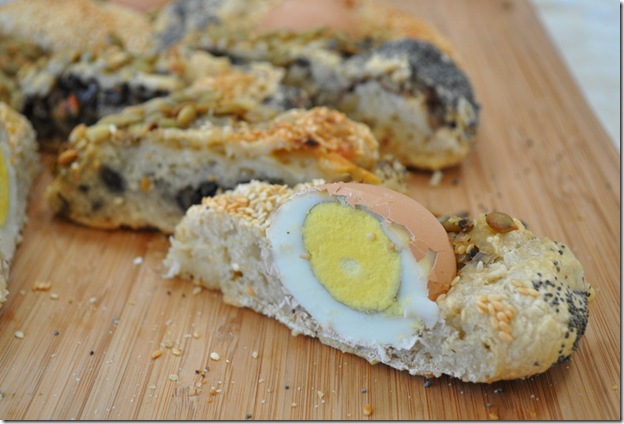 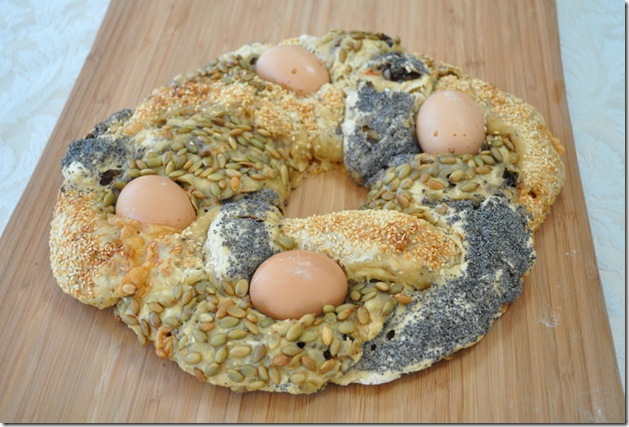 Just for insurance (I’m a masochist and planning to make this a FOURTH time on Easter Sunday) I will add a teaspoon of sugar to the dough next time to give it a little more nourishment. And I won’t place it in the oven to let it rise – just on the counter, covered with a cloth dishtowel. Braided Easter Bread printable recipe here 3 cups flour, preferably bread flour 1 cup semolina flour (it’s yellow and very fine) 2 teaspoons dry yeast 1 t. sugar 1 tsp. salt 2 cups water, more or less 1 cup green olives 1 cup sharp provolone cheese 1 cup soppressata or salami (or chopped, sauteed mushrooms for a vegetarian version) 4 eggs, plus another beaten egg for the wash sesame seeds, pumpkin seeds, poppy seeds In a large bowl, mix the flours, yeast, sugar and salt. Start adding the water, withholding some of the two cups of water to see how much it will absorb. It may take more or less than two cups of water, depending on the flour and the humidity of the day. When the dough pulls away from the side of the bowl, it’s time to remove it and start kneading it, using extra flour as needed. Knead for about five minutes until it feels smooth. Coat the bottom of a bowl with olive oil and place the bread inside, smearing the top and bottom with the oil. Put a dishtowel or some plastic wrap over the bowl and let it rise in a warm place for a couple of hours. It may take longer, depending on how warm your house is. After the dough has risen properly, divide it into three equal sections, but leave a little bit aside for covering the eggs with little strips. Roll out each portion into a flat “log” shape. Spread the filling over the dough and pinch the edges together. Repeat with the other two strips. Brush each strip with beaten egg, then sprinkle on the sesame seeds, pumpkin seeds and poppy seeds on separate loaves. Pinch the ends of the three loaves together and start to braid them. When you’re finished braiding, pinch the other three ends together. Then twist it to form a circle.  Nestle the four eggs into the bread and cover with the little strips of dough you set aside, forming a cross. Transfer the whole thing to a baking sheet. I find it easier to do the whole process on a piece of parchment paper since it makes it easy to transfer to a baking sheet when you have formed the braided circle. Preheat the oven to 450 degrees. Bake it on the lowest oven rack for 10 minutes at 450, then lower the heat to 350 for another 40 minutes. Let it cool slightly before cutting.

No, this isn't hummus. It's what you might call the Italian equivalent…

I don't know about you, but when April comes each year, I…

If you’ve followed this blog, you know that I am a member…