Those of you who read this blog regularly know that Italy is my muse and Italian cuisine is highlighted here. That doesn’t mean I don’t like food from other countries. I’m an equal opportunity eater, even if Italian food is my comfort food of choice. When I had the opportunity last week to attend an Indian cooking class, I jumped at it. Again, thanks go to my photographer friend Paul who not only lent me his camera for a couple of weeks, but also asked me to take his place when he had to miss the first night of his Indian cooking class. A group of about ten people gathered around Ritu, our charming teacher who explained a lot about the cuisine as she cooked, including the various spices and ingredients used. The above photograph is the selection of spices Ritu used that night, starting from the bright orange chili powder on top. Going clockwise, you will find ground cumin, a tin with cinnamon sticks, green cardamom and cloves, then more tins containing cumin seeds, turmeric and coriander. Fenugreek is in the center. Since most people were arriving from work, Ritu wanted to have something ready for people to eat as soon as they got there. She had already prepared these little potato and cilantro chutney pinwheels ahead of time, baking them as everyone was seated. They are really a snap to make, using packaged crescent rolls from the refrigerated section of the supermarket. The filling contains boiled and mashed potatoes, cilantro leaves and a mixture of spices. It’s spread on the dough, rolled up and baked. 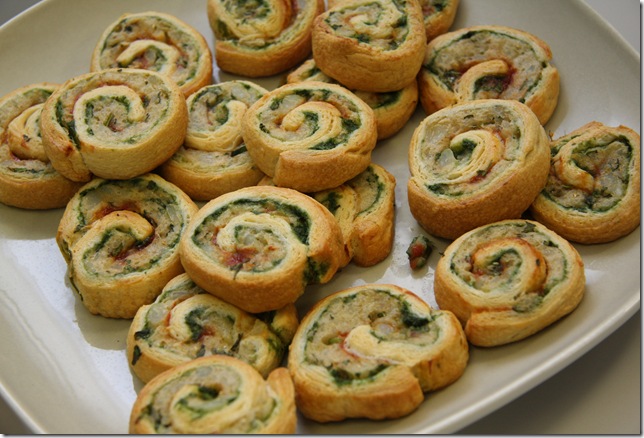 Next, she prepared Aloo Gobi – or potatoes and cauliflower – as we stood around the stove, taking turns stirring when she needed an extra hand. Lots of different spices were tossed in, including ginger, green chilis, cumin seeds, chili powder, turmeric and coriander. Ritu also added some asafetida and fenugreek powder, not only for the flavor, but to help cut down on the gassy effects from the cauliflower. Who knew? It was garnished with more cilantro leaves. 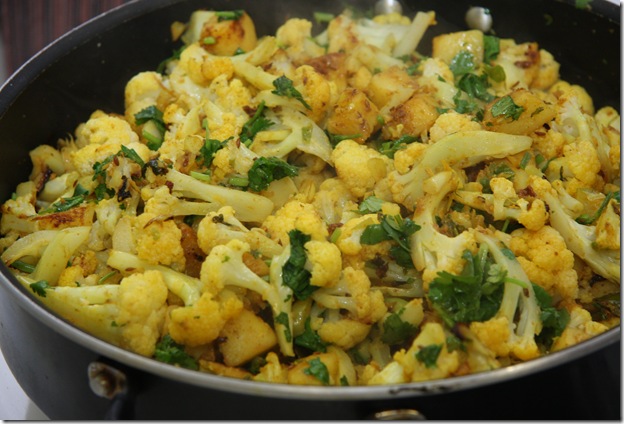 Ritu prepared a boondi raita next. Raitas are made with yogurt and other ingredients, including other spices. Even with the addition of the spices, the yogurt adds a cooling effect to counter accompanying, more spicy dishes. For this raita, Ritu added some boondi, small chick pea fritters that resemble little Kix cereal pieces. When all the ingredients were mixed together, she decorated it with cumin, chili powder and fresh cilantro. A mutter paneer dish was next, using Ritu’s homemade paneer, a type of freshly made cheese similar to farmer’s cheese. But before adding the paneer, Ritu fried some onions, with ginger, poppy seeds, cardamom, cinnamon, cloves, cashews and raisins, then added turmeric, chili powder and coriander. After that tomatoes, tomato paste and ghee (clarified butter) were added and cooked for about 15 minutes. Finally came the green peas and the paneer and more fresh cilantro leaves for garnish. 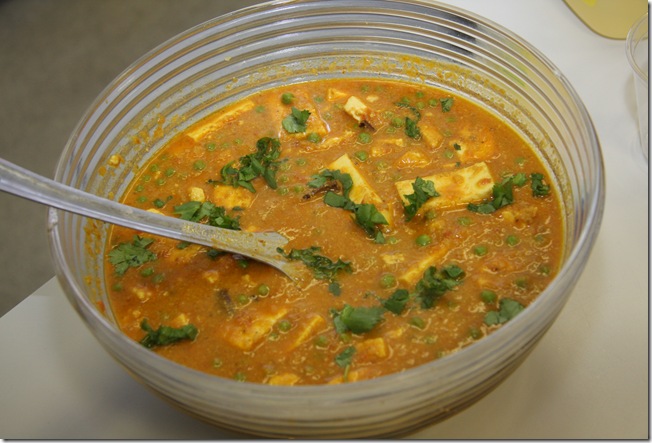 The dishes were served with poori, a deep fried Indian bread. – recipe at the end of this post. But the food didn’t stop there. Ritu had a dessert up her sleeve, called Sooji Halva, made with a semolina flour, sugar, ghee, cashews, raisins and slivered almonds, with a little cardamom and saffron thrown in too. 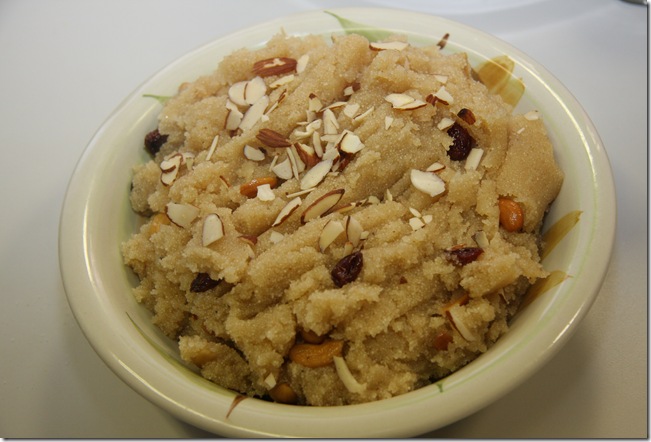 Everything was truly delicious and Ritu had a relaxed and friendly teaching style that put everyone at home. She encouraged us all to participate if we wanted, or to sit back and watch if we chose not to. The most fun part, aside from the eating, was watching the poori puff up in the hot oil. Although Ritu handed out recipes for all the dishes, most of them require ingredients that I don’t normally stock in my pantry. But these poori don’t require anything esoteric – just whole wheat flour, salt and water.  Refrigerate the dough for a while to make it easier to handle, then heat some oil in a frying pan. Pinch off a small portion of the dough (about the size of a large walnut) and roll it out. 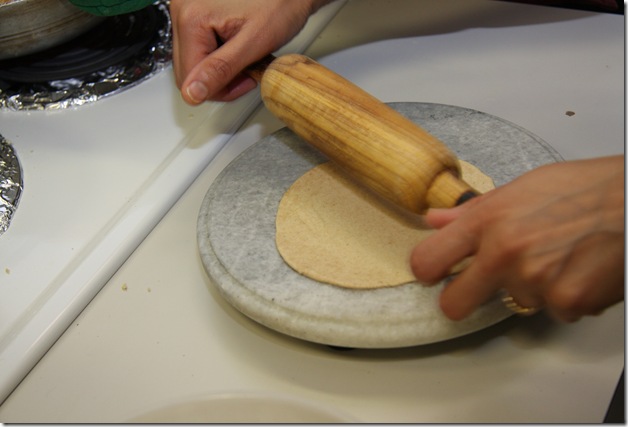 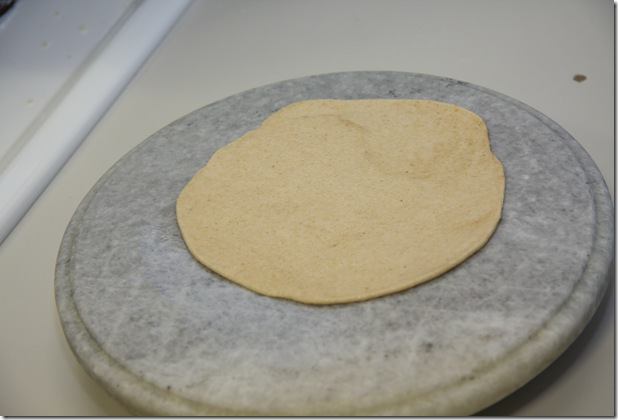 Push it down into the hot oil and start swishing some of the hot oil over the top. It will start to puff up instantly. 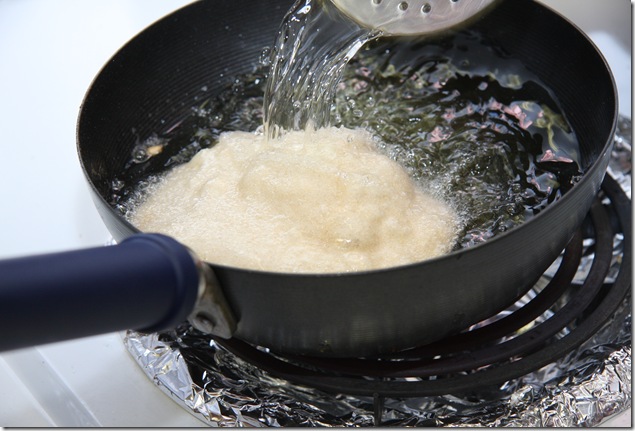 Carefully flip it over. 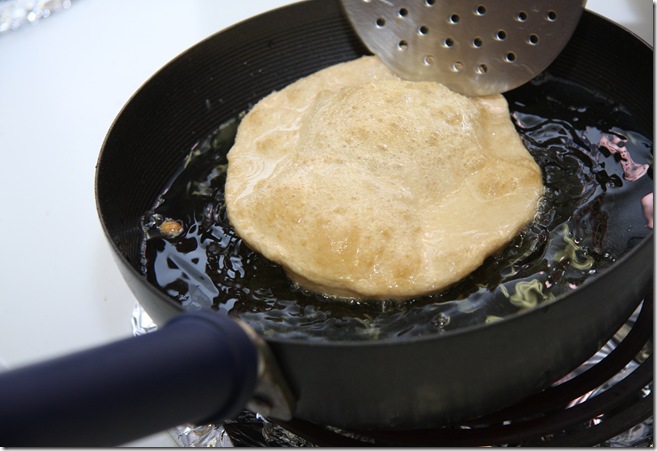 The poori puffs up nicely when it’s made properly and the temperature is just right. If the oil is too hot, the bread will brown too quickly and won’t be fully cooked. You’ll know as you go along whether you need to adjust the oil temperature. 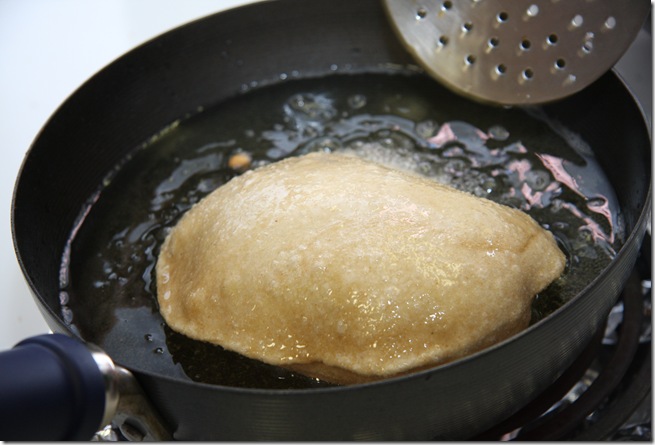 Here’s our lovely teacher Ritu, with a perfectly formed and cooked poori. Thanks Ritu (and Paul) for a fun evening. 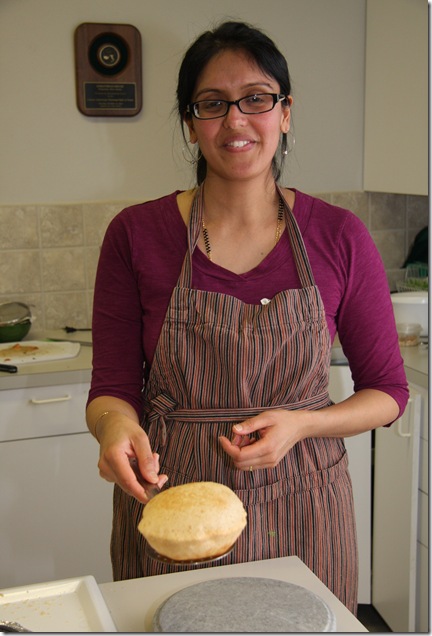 While I lament saying goodbye to the juicy tomatoes, sweet corn and…

Now that wine grapes are in season, don't miss this chance to…