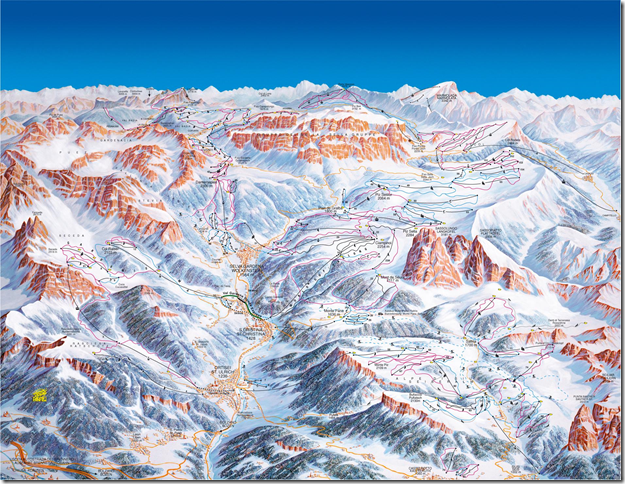 My husband prefers the apple strudel with the thin, phyllo-type pastry, commonly eaten in Vienna and throughout Austria. It’s offered at many places in the Val Gardena too, which is not too far from the Austrian border. Mind you, I won’t turn this down either. 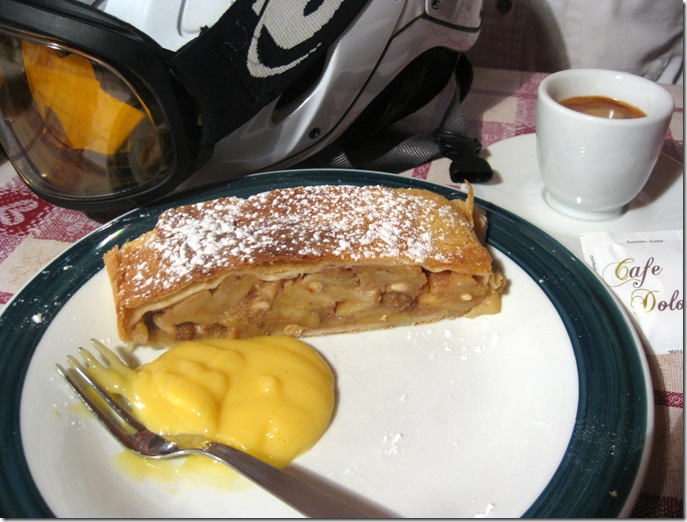 But in pursuit of my favorite kind – the kind with a “cakier” type of pastry – I had to stop at a refugio or restaurant each day to try out the different versions along the slopes. This one at the top of the Ciampinoi gondola is more my style: 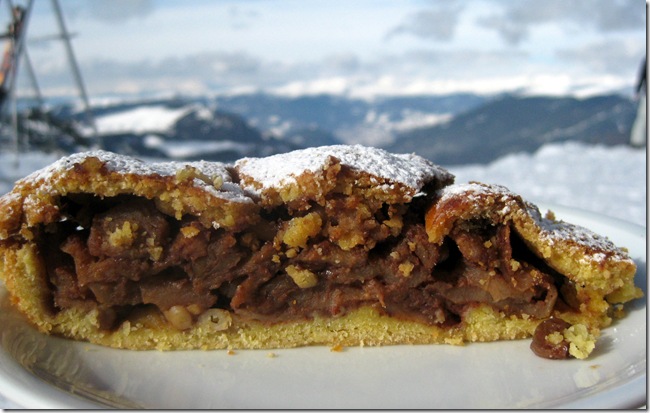 And if it comes with vanilla sauce (crème anglais) that’s not too thick and a cafe macchiato, like this one at the Spitzbuhel refugio, so much the better: 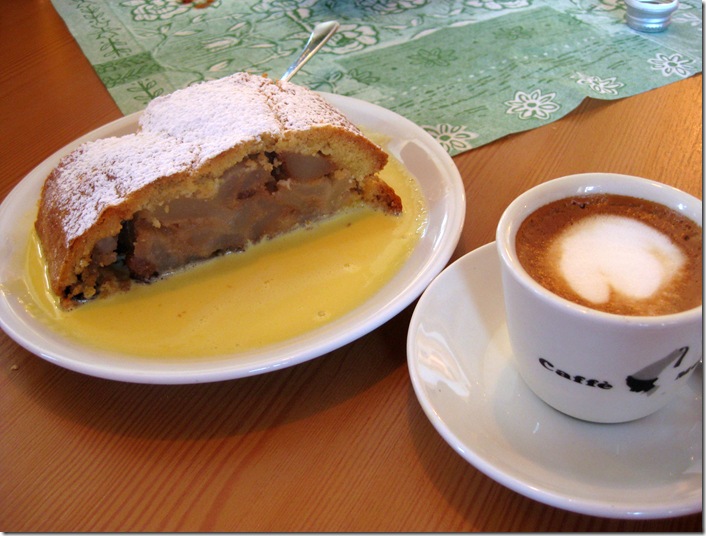 Now if ever there was a temptation to flee with the goods, here it was, fresh from the oven and cooling out in the open: 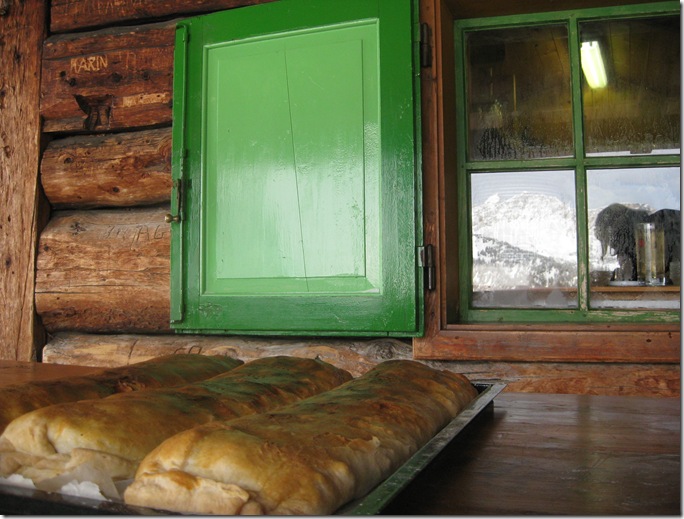 On my last day of skiing, we stopped for a final apple strudel before heading down the mountain, and it was perfect – just the way I like it, and with a crème anglais that wasn’t too thick. 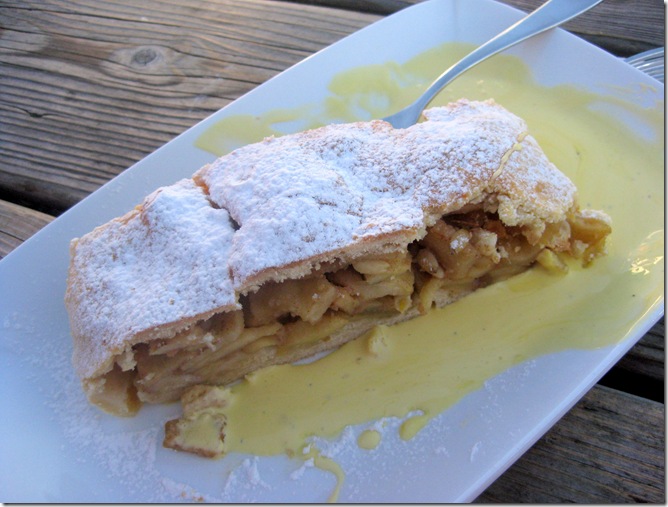 To my surprise, Sonia, a barista working at the restaurant – the Mont Seuc on the Alpi Di Siusi – gave me the recipe for the pastry – something she called 1,2,3. If you read the Italian recipe she gave me, it’s named 1,2,3 because it requires 100 grams of sugar, 200 grams of butter, and 300 grams of flour. Don’t worry, I’ve given you the recipe in English too. The filling is the same as I used in the apple strudel recipe I blogged about last year. However, I overstuffed the strudel this time and still had too much left over. So in making the recipe, I would use six small apples, rather than six large apples (or use four large ones.)
I’ll take you though the process, step by step:
After you make the dough and let it rest in the refrigerator a half hour, roll it out on a floured board to about 18” by 12”. Notice that there are little bits of butter still in the dough – that makes for a flakier crust, so don’t mix it so much that it’s completely homogenous. 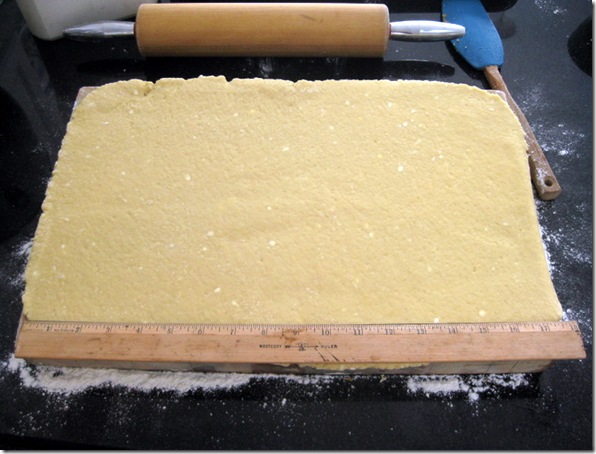 Take a floured rolling pin and wrap it around one end, continuing loosely to at least half-way on the pastry: 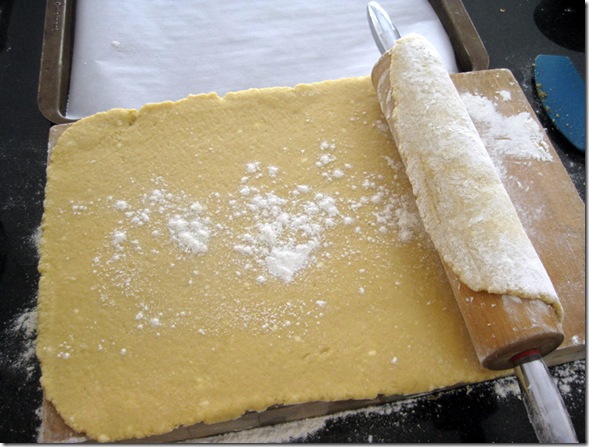 Carefully lift it and place it on a cookie sheet that has been lined with parchment paper, then dump the apple filling along the center. I had to remove some of these apples, because it was too much to allow the pastry to close. 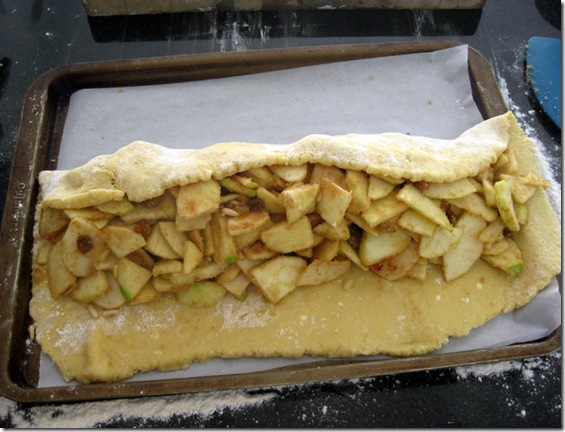 Bring the ends of the pastry together and seal shut, using a little water to moisten the edges. Here’s what it should look like. At this point, you may be wondering how to turn it over without breaking it. It’s simple. Just take another cookie sheet lined with parchment and place on top of the strudel. 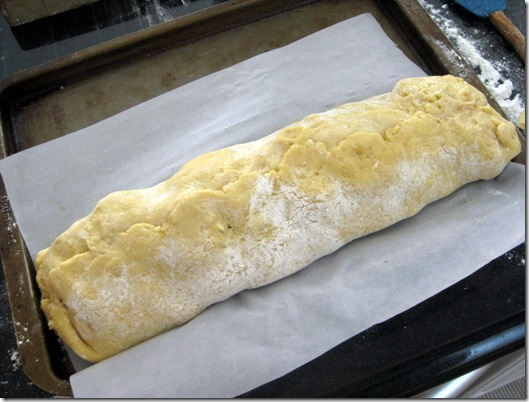 Then flip it over and you’ve got a nice clean-looking pastry with no patched-together areas. But don’t make the mistake I made and bake it just like this. Now you’ve got to poke a few holes to let the steam escape – something I forgot to do. 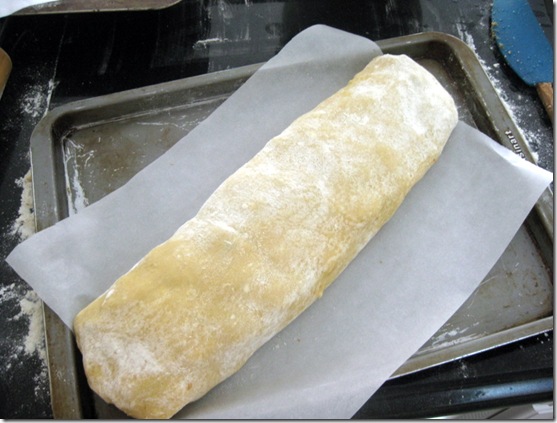 Otherwise, you end up with a strudel that looks like it underwent surgery and now the doctors can’t figure out how to get the parts back together: 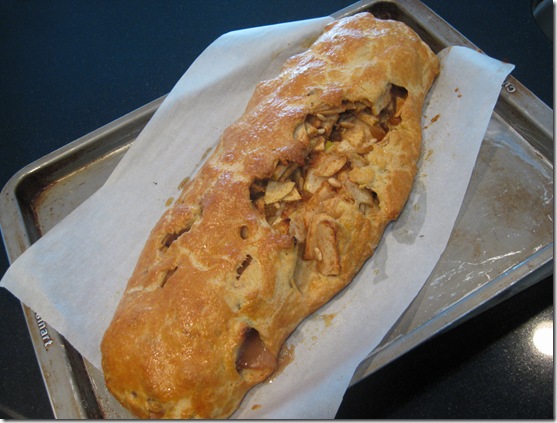 But even that doesn’t matter, because it all tastes fabulous and once you get the powdered sugar on top and a puddle of vanilla sauce beneath, nobody will even notice the rupture. 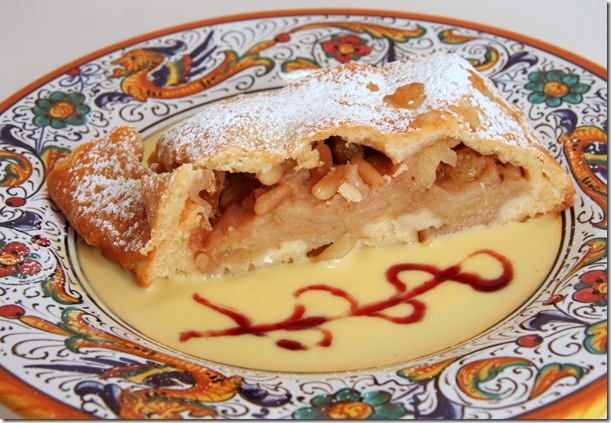 See? What did I tell you?
So what are you waiting for? Maybe you won’t have the benefit of the alps to get you going, so I’m sending you a few recent photos from our recent trip to the beautiful Val Gardena to give your apple strudel gene some inspiration: 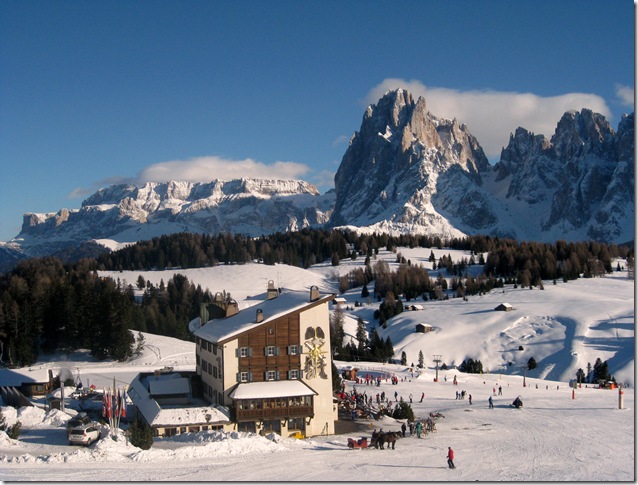 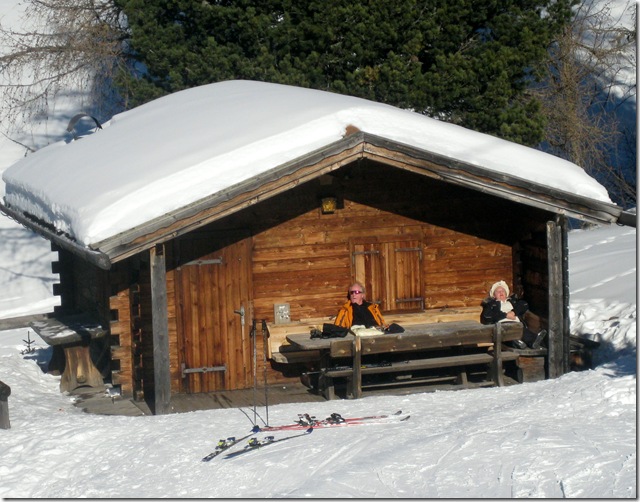 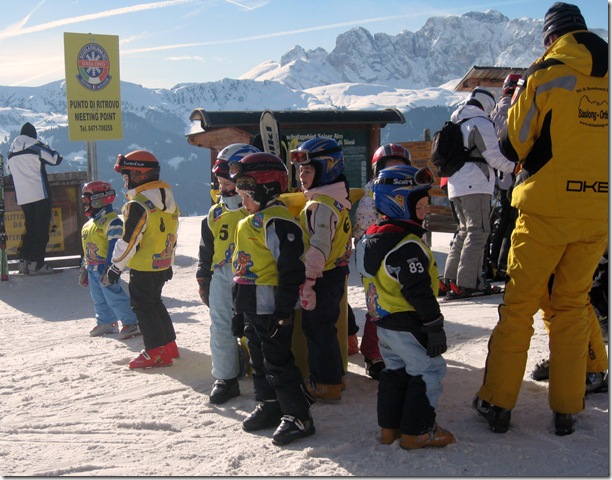 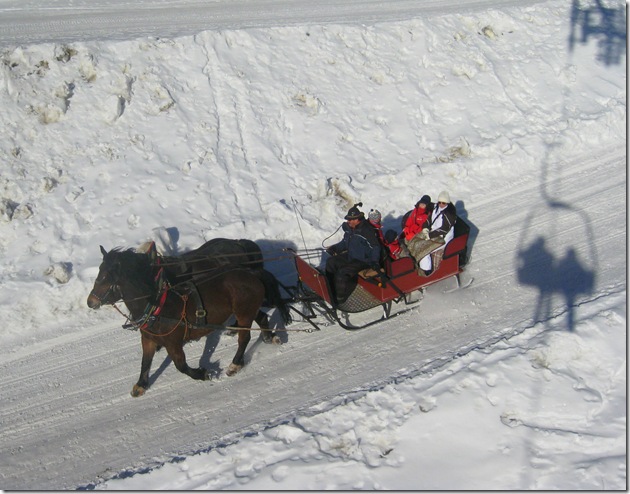 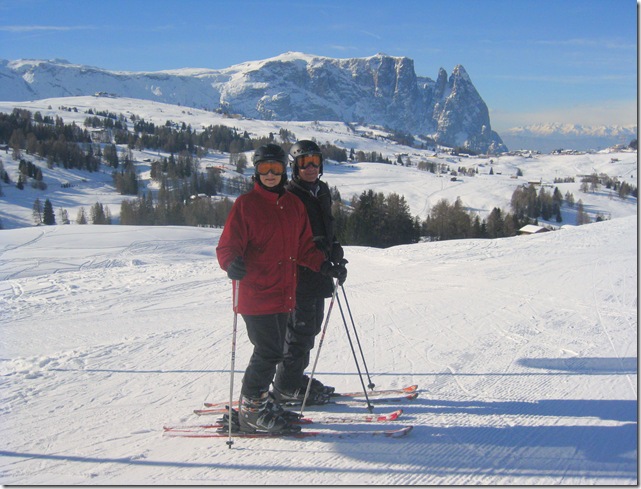 1,2,3 Apple Strudel
printable recipe here
1/2 cup sugar (use slightly more if you like a sweeter dough)
1 stick plus 6 T. softened unsalted butter
2 cups flour
pinch of salt
1 t. vanilla
4 medium eggs (if you use large or extra large eggs, add a bit more flour – maybe 1/4 cup to 1/2 cup)
Filling:
6 small apples, peeled and sliced thinly (or four large ones)
3/4 cup finely grated breadcrumbs
1/3 cup sugar
1/4 cup toasted pine nuts
1/2 cup white raisins, soaked in rum
1/2 t. cinnamon
pinch of cloves
pinch of grated nutmeg
grated peel from 1/2 lemon
one beaten egg yolk to brush on dough
Blend the flour and butter in a food processor. Pulse until butter is broken up and mixed with flour (but don’t over mix or you’ll get a tough dough) Add the sugar and salt, then add eggs, one at a time, pulsing just enough to blend. (Alternately, mix everything in a mixer.) When everything is well blended, place the dough on a work surface. If the dough is too sticky to work, you need to a bit more flour, so just knead it in, but don’t overwork it. (I needed to add another 1/2 cup or so of flour). Wrap in plastic wrap and place in the refrigerator for at least 1/2 hour to make it easier to roll out.
On a floured surface, roll dough to about 12” x 18”. I actually roll it out right on a sheet of parchment paper so I can transfer it easily to a cookie sheet. Mix all the filling ingredients in a bowl and place in a line down the middle of the dough. Bring the long ends together, moistening the ends with water to help them stick.
Flip over onto another cookie sheet that’s been lined with parchment. Prick in several places to allow steam to escape. Brush with beaten egg yolk. Bake at 350 degrees for 45 minutes to 1 hour, turning the pan in the oven at the midway point.
Sprinkle with powdered sugar when ready to serve.

Fall is finally here and so is soup weather. And when I…