In many Italian-American households, the Christmas eve meal is a multi-course fish extravaganza. Our household was no different, as my mother prepared fried smelts, baccala, pasta with squid and scores of other seafood specialties. I’ll never forget the Christmas Eve when my grandfather decided to decapitate the eels in the kitchen sink, just below my mother’s white lace curtains. I’m not sure what became more flaming red – my mother’s temper or the formerly white curtains!  I don’t remember keeping count of whether we had 7 or 13 different dishes, but there was always a variety, and there were always neighbors popping in until the wee hours to savor some of the bounty. It’s a tradition I’ve been maintaining since I got married and continues today, although the variety of dishes has changed. We’re likely to start off with a cold seafood salad, shrimp cocktail and maybe an octopus and potato salad. I made it for the first time last year and it was gone in a flash. 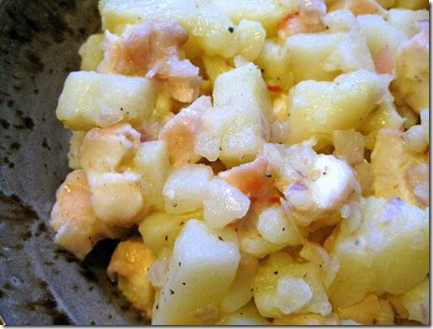 For the main event, there has to be stuffed squid in tomato sauce for sure, a dish my Abruzzese mother-in-law makes and that now my son prepares. It’s an all-time favorite. 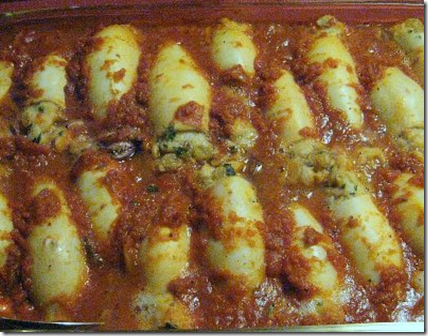 The smelts and other fried seafood have been replaced with dishes that don’t use heaps of oil, such as seafood risotto: 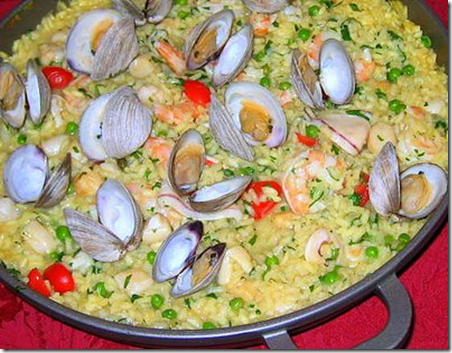 and fillet of sole stuffed with shrimp. 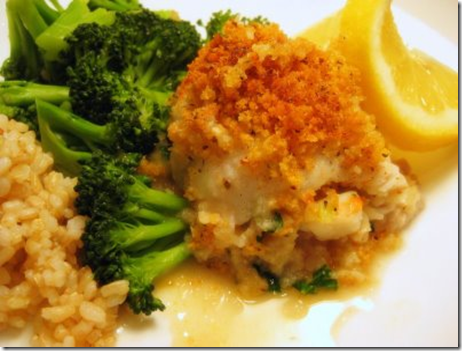 I try to include baccala, the salt cod that has a distinctive flavor, but rather than deep fry it, I’ll use it to make either codfish cakes or baccala mantecato, a creamy seafood spread that I’ll serve with grilled polenta squares. I still haven’t figured out the whole menu, but another dish that may make the cut for the Christmas eve table is this Mediterranean-style swordfish. It’s got all the flavors of Southern Italy with its capers, olives and tomatoes, and is delicious with not only swordfish, but other kinds of seafood, like tuna or cod. This swordfish dish takes me back to Calabria and a town called Scilla, where several years ago, my husband and I, along with my brother-in-law Joe, ate nearly the identical meal at a restaurant overlooking the Ruffo castle, a fortress that was built by the Dukes of Calabria. Scylla is also the name of the sea monster in Greek mythology who is said to have swallowed six of Odysseus’ men in Homer’s Odyssey, right here near the straits of Messina.  I have to admit that while my dish is delicious, nothing compares to eating it with the view of the Mediterranean Sea. But maybe if Scylla had tried my version, he’d have preferred it to Odysseus’ men.

This swordfish dish is also my entry for the virtual Feast of The Seven Fishes that Joe of Italyville.com is running. 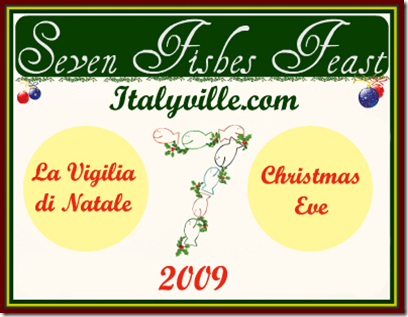 Joe’s accepting entries until December 18, and is offering a gift to a lucky someone chosen at random, so hurry and get your offering in. Buon Natale! Mediterranean-Style Swordfish printable recipe here 3 T. olive oil 1/4 cup minced onion 2 garlic cloves, minced 1/2 green pepper, minced 3 T. capers olives (I used about 8 Kalamata olives that I pitted and smashed, but you could leave them whole. To pit, take an olive, put it on a chopping board and smash it, using a can from your pantry) 1 small can of diced tomatoes (about 15 oz.) 1/4 cup white wine salt, pepper 2 T. dried basil (or fresh if available) swordfish (I used a one-pound piece, but this sauce is enough for two pounds) chopped parsley Saute the onion, garlic and green pepper in the olive oil. Add the tomatoes, white wine, capers and olives, salt, pepper and basil. Simmer for about 20 minutes, then add the swordfish. Cover and cook another 10 minutes at a low simmer. Sprinkle with chopped parsley.

When I was younger and there was a special occasion -- a…