Got an odd remnant of roquefort, a small piece of parmesan and a little chip of cheddar sitting in your fridge? Or maybe a teensy bit of brie and a bite of boursin? You know, the odds and ends that are too small to serve to guests on a cheese tray, but not so large that you can ignore them either. This Christmas, we received a large amount of really fine cheeses from around the world, courtesy of my visiting brother-in-law and my son. After a wine and cheese gathering with friends, a fair amount was consumed. One of the cheeses in particular has become my new favorite – a triple cream brie called brillat savarin. It was the smallest cheese on the board, and it was covered with bits of fruit that I originally thought were cranberries, but turned out to be papaya. It’s the only cheese that was totally gone by the end of the night – mostly due to the fact that it was positioned right next to me and my gluttony took over, I confess. Here’s a shot of the soft cheese tray, including the brillat savarin at the bottom left. 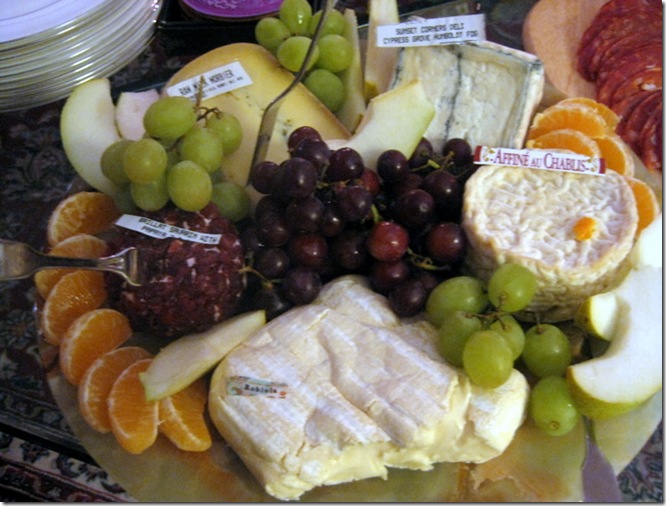 And here are the hard cheeses that made it onto the tray. I kept an aged gruyere in the fridge for another use. I didn’t get a shot of the entire tray, so there are a couple you can’t see. But what you can see is how much cheese we received and how dangerous this was going to be to my hips. 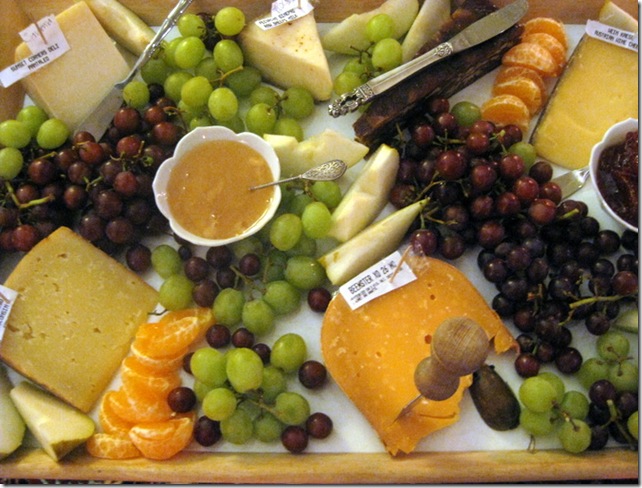 That’s where the cheese spread comes in. The leftover bits were not large enough to make an attractive display the second time around on a cheese tray. The humboldt fog blue cheese made its way into a cheese souffle (to be posted later), and the rest was reincarnated into a cheese spread. The recipe was inspired by one from Jacques Pepin called fromage fort (strong cheese), but I tweaked it a bit with the addition of herbs and brandy. Just grate the cheeses in a food processor, add some white wine and brandy or sherry, some garlic and herbs and voila! You’ve got a great spread for crackers or bread rounds just in time for New Year’s Eve. The recipe makes about 2 – 2 1/2 cups of cheese spread. You can cut the recipe in half if you don’t have as much leftover cheese as I did. From my cache (about 1 pound), I divided the spread into two separate crocks and plan to freeze one for later use. 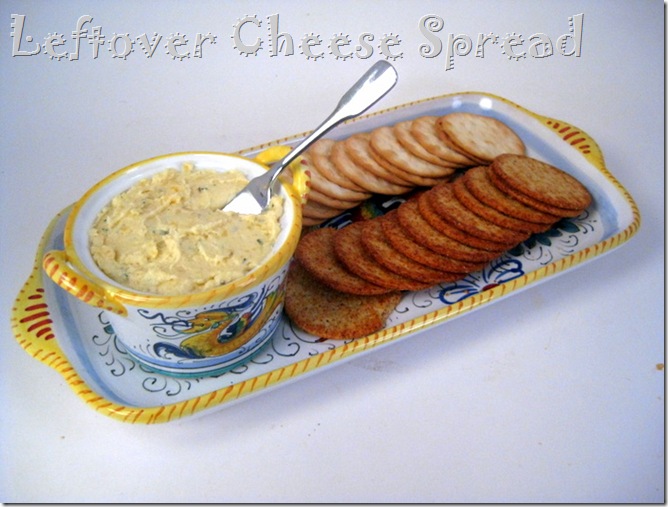 Grate the hard cheeses using a grater or food processor disc. Add the soft cheeses, and the rest of the ingredients. Pulse until everything is blended to the desired smoothness. Spoon into a crock or small bowl and let it sit for at least an hour, or preferably overnight, to blend the flavors.

Flounder and Fennel with Lemon and Oranges

The older I get, the harder it becomes to shed those extra…

This is no plain brown bag. It’s from “Per Se,” Tom Keller’s…

It's useless. I'm not even going to apologize for posting a decadent…