It would be hard to find a church without a presepio at Christmas time in Italy. Those are the nativity scenes that depict the newborn baby Jesus with Mary, Joseph, the three wise men and sometimes scores of other people too.  Yes, you see them in churches in the U.S. at Christmastime too, but in Italy, you’ll find them not only in churches, but everywhere – in shop windows, in museums, as special displays in public spaces, and almost every home as well. And in Italy, they’re elevated to an art form – whether they’re made of terracotta, wood, paper mache or other materials. They can be rustic or ornately crafted such as the one above. You’ll often see the setting change from beautiful baroque backgrounds to perhaps a rustic farmhouse like the one below. Notice the bagpiper, an instrument that’s played not only in Scotland, but in many parts of Italy as well, like Molise and Abruzzo: 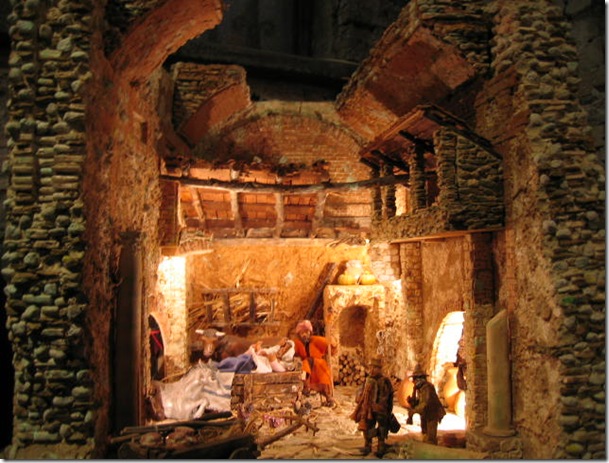 This one below looks like it could have been set in a 17th century Neapolitan neighborhood, not surprising since the most famous presepio makers are from Naples, where there’s an entire street dedicated to presepio shops. 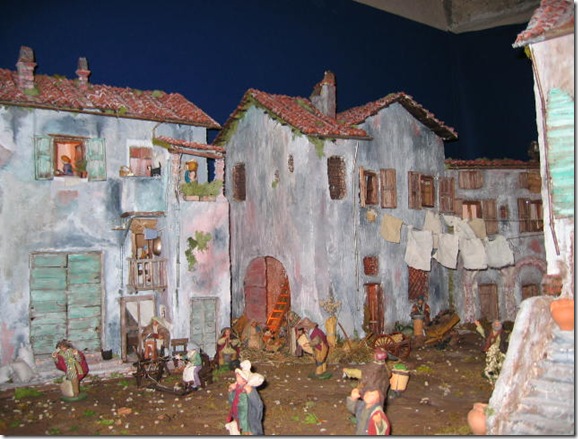 This nativity scene looks like it’s set amid Roman ruins: 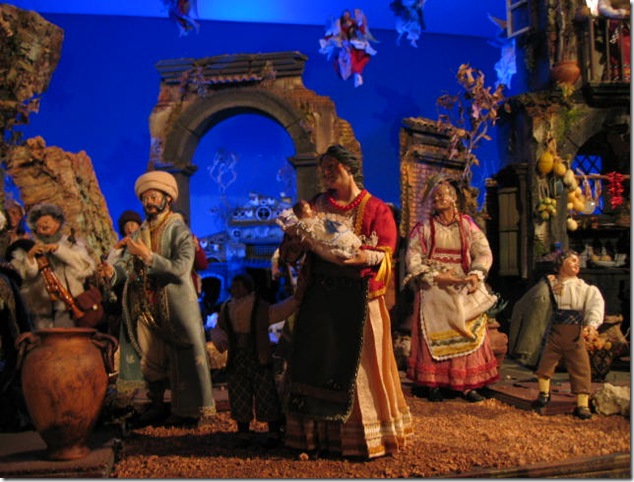 This one is modeled after a street in Rome called Via Giulia, complete with a fountain that still exists there: 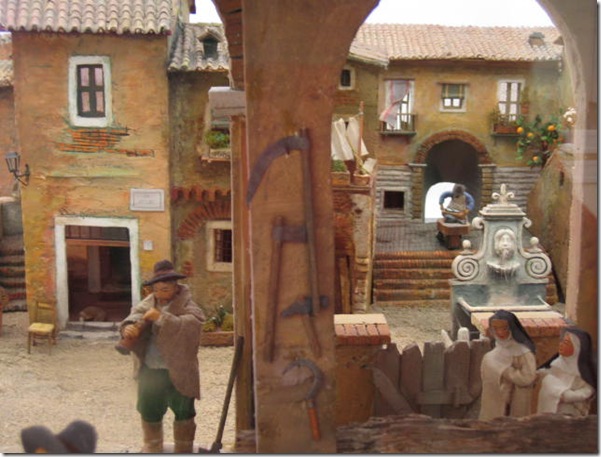 Although you can’t tell from the photo, this presepio at Rome’s Spanish Steps has nearly life-size figures. 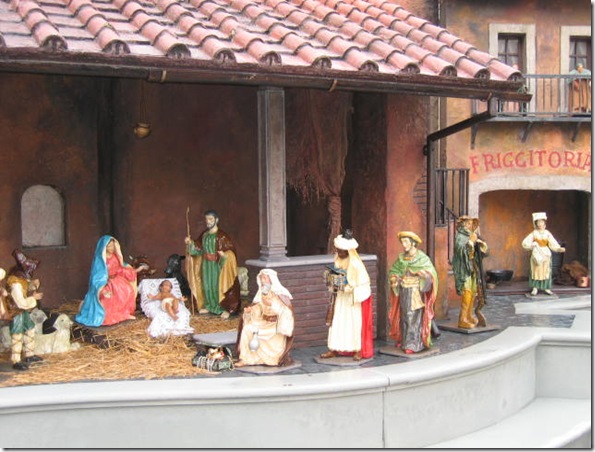 On the other extreme, this one from the Alpine town of Bressanone has miniature figurines set inside an earthenware jug: 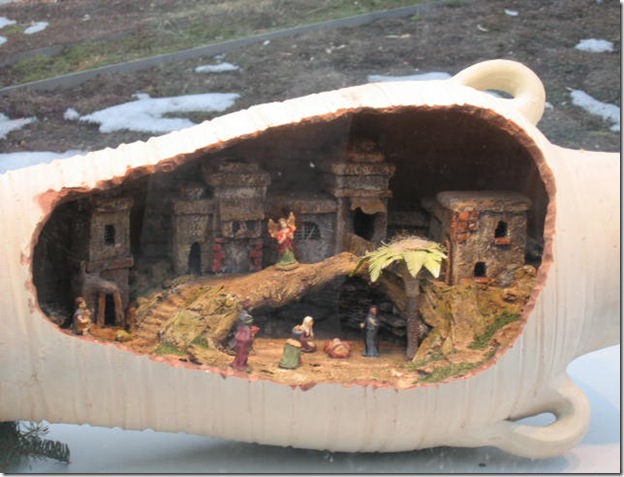 Almost all Italian presepi (plural of presepio) contain figurines at work – from washerwomen to millers to bakers, like this fellow about to put some loaves into the oven: 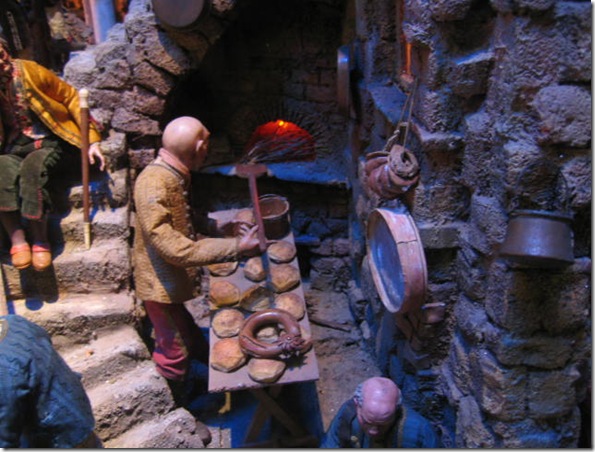 Or this fellow sharpening some knives. Many times the figures are mechanized and become animated. Rome’s Piazza Navona is a wonderland of small stalls at Christmas time, with merchants selling all sorts of presepio figurines (in addition to great torrone and other holiday candies.) 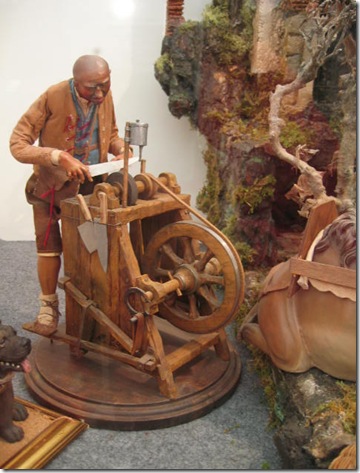 Look at the detailed cheeses, meats and peppers hanging from the rod in the scene below: 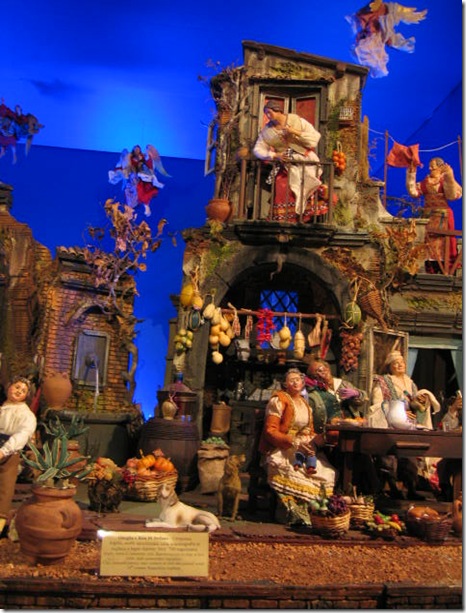 Pastry shops get into the act as well, like this one that sells cakes with a built-in presepio made of sugar. You can find a presepio made of almost anything you can think of. We’ve even seen them made entirely of figurines based on Pinocchio, the story written by the Italian author Carlo Collodi. 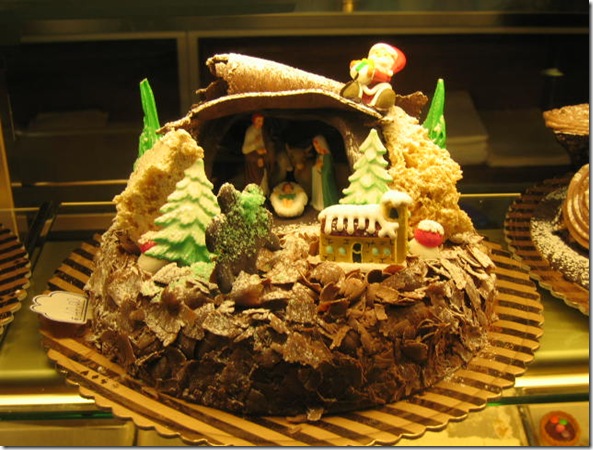 And since this is Italy, don’t be surprised to see one made of pasta like the one below: 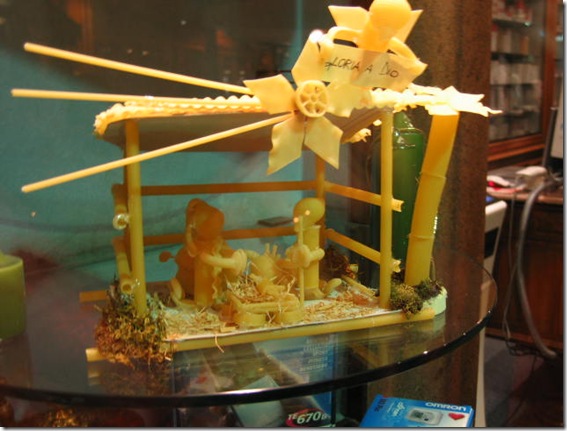 The one below made of a styrofoam meat tray has a special story and meaning for us. We were living in Rome several years ago and our adult children came to visit at Christmas. We had schlepped them around the city to see all the presepi that we loved so much. We celebrated in a quiet way, just the four of us attending a glorious Christmas Eve midnight mass at St. Peter’s basilica and cooking a simple meal at home.  We decided to make our own presepio using a styrofoam tray from the market, with a little different twist on the nativity scene. If you’re wondering what Charlie Brown, Snoopy and Linus are doing amid Mary, Joseph and the wise men, you have to realize that watching “A Charlie Brown Christmas” is a tradition that we maintain every year, whether we’re apart or together. Our son brought over a DVD of the show and we watched it together on my laptop computer in our Rome apartment. Seeing Charlie Brown holding his puny tree, Linus as a shepherd and Snoopy as part of the nativity scene just seemed right to us then and now. We wrapped up our styrofoam presepio when we moved back to the U.S. and each Christmas I look forward to displaying it and reliving the memories of one of the best Christmases ever. 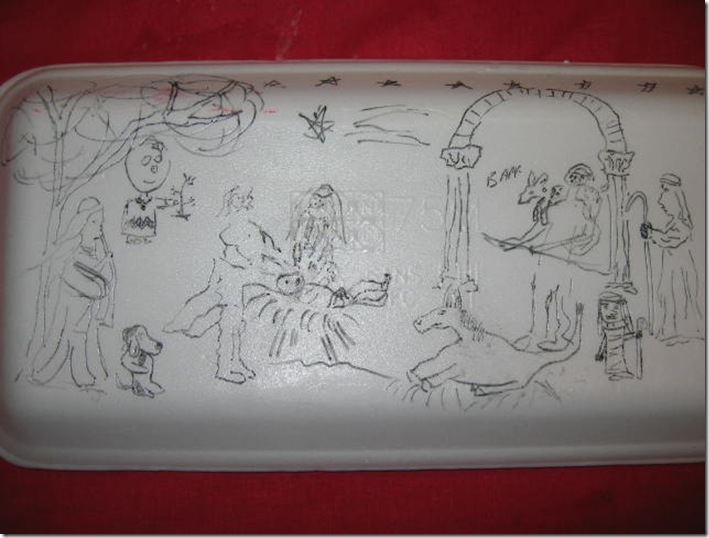 The last presepio is not located in Italy, but in the U.S. and it’s one of the most elegant, beautiful presepio scenes ever. It’s erected every year at New York City’s Metropolitan Museum of Art as part of its Christmas tree display, and this is only a small section of it. You might have guessed though – it was made in Italy. Buon Natale. 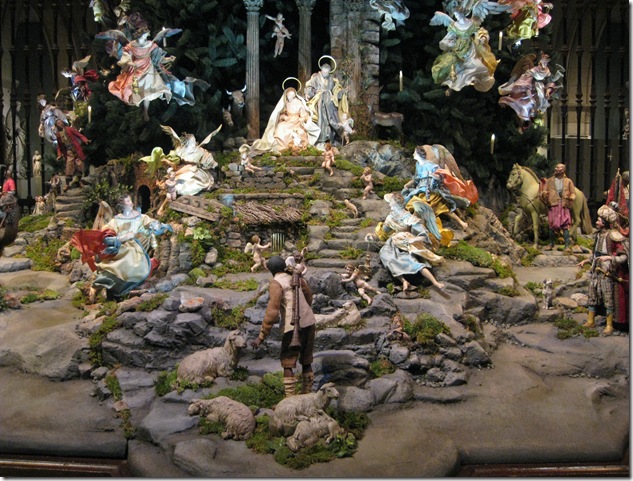