Was she waving at me? Well, I’d like to think so when I snapped this picture in 2007. Lidia Matticchio Bastianich, seen here as Grand Marshal in New York City’s Columbus Day Parade, has just written “Lidia Cooks From The Heart of Italy” with her daughter Tanya Bastianich Manuali.  In this second part of a two-part interview, the beloved chef, entrepreneur, and restaurateur talks to Ciao Chow Linda about her Christmas menu, cooking for the Pope and thoughts about the future. Did you miss part one of the interview? Click here to read it.  Q. Viewers salivate over the dishes you prepare on your TV show, but what do you really prepare at home for your family and what are some of their favorites? A. A lot circles around the kids – They like chicken and potatoes, lobster and risotto, soups. I get a lot of requests from the mothers for something they can take home with them. I package it up for them to take home for the kids during the week. Even Sunday we’ll do some cooking for them for when they come but also two extra pots for them to take away, whether it’s sauce or vegetable soup. Mothers with young kids today are running all over the place. For the chicken, I cut it in pieces, just cook it on top of the stove in the skillet, with rosemary, garlic, onions, and throw in the potatoes as well, one of these one-pot meals. I have sausage and grapes, chicken in pieces and olives in the new cookbook – one of those one pot meals. 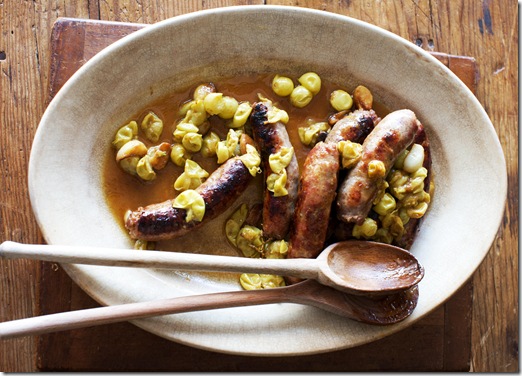 sausages and grapes (photo courtesy of Lidia) Q. Do you prepare the feast of seven fishes for Christmas eve? A. Yes, we have seafood, but the seven or 13 fishes is more Southern Italian. We may have sardines, or baccala mantecato or octopus salad. Q. What are some of the traditional things you prepare for Christmas or Christmas eve dinner? A. First it’s a soup or pasta or risotto, then a roast. Goose was traditionally what I remember. If you go back to December when I was growing up, it was usually the courtyard animals – goose, duck, capon, roasted rabbit. Rarely was it veal because they wouldn’t just slaughter veal that time of year. It’s the courtyard animal roast and root vegetables – potatoes and game, or polenta or gnocchi with sauces made with game, lepre, hare, venison. Now what I do is the roasts. I use pork. I love a roasted rack of pork or even a shoulder. Q. Do you like other kinds of cuisine besides Italian? A. I like to discover all kinds of cuisine. There are so many. I like Asian – Thai, Vietnamese, Chinese, I’m getting into the Middle Eastern cuisine now – Moroccan, Egyptian, Lebanese food. I find them intriguing. They’re not too far from Italy. Go to Sicily and you’ll see where the Sicilians got their influence for their cuisine. Q. When you eat out at a restaurant other than your own, what are some of your favorites? A. I have a lot of friends in the business. I certainly go to the newly-opened ones to wish them well.  I really like to go to the little ethnic neighborhoods and get into those cuisines as true as best to form. Sometimes it backfires but sometimes you get a man or woman behind the stove who really knows how to cook well. Q. What’s the hardest part about the work? A. It’s the hours, the long hours of standing. I think at the end of the day you look forward to plopping down. Q. Who came up with your signature slogan “Tutti a tavola a mangiare?” A. When we first started the shows, in thinking about the closing of a show, we thought about how do you want to leave? When you cook something, “Tutti a tavola a mangiare,” it’s just a natural saying. Q. If you had to choose your last meal, what would it be? A. Simple things, like a slice of great prosciutto, perfectly ripe figs, perfect al dente linguine with clam sauce, a perfectly roasted stinco, Fruiliana wine and grappa at the end. I like sweets, but they’re not that important to Italians. 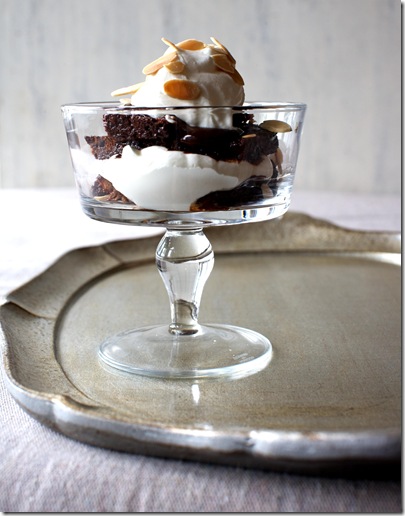 chocolate bread parfait (photo courtesy of Lidia) Q. Can you name some chefs that you admire, living or dead? A.  A lot are Italian and not well known here, for example, Lidia Alcianti of Guido’s restaurants in Piemonte;  Luigi Caputo from Torino; and my Zia Nina, who was a spectacular cook and very influential to me. For more contemporary and better known chefs in the United States, I would say Julia child. Not so much for the cuisine, which is French traditional, but more for her approach and easiness. My TV presence owes a lot to her and the uncomplex, straightforward mannerism that she had. Q. Would you say that being chosen as the cook for Pope Benedict’s visit to New York last year was the highlight of your career so far? 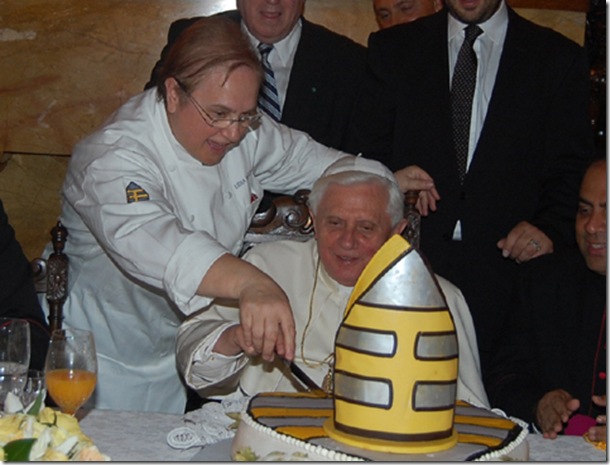 photo from istrianet.org A. I think that’s about as celestial as you get. Initially I was nervous, but then we became good friends. Food has a wonderful way of connecting and opening doors and becoming a common venue for things. In the beginning, there was the planning and all of that. I feel very close to him now. Q. You’ve already achieved so much in your career.  Is there anything left that you want to accomplish? A. No, just do more of what we’re already doing. It’s not something where I’m checking off a list. The opportunities come as you evolve in what you do. Each thing takes you somewhere else. You’re doing something and a natural follow up presents itself. What happens with me in the future means I want to do the best I can. There’s always figuring out the economics.  I want the product to be beautiful first. And then I make the money. I want to do it the best I can. 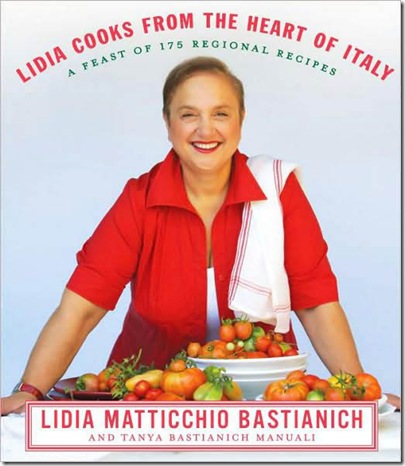 LIDIA’S SAUSAGES IN THE SKILLET WITH GRAPES Salsiccia all’Uva Recipe from “Lidia Cooks From The Heart of Italy” printable recipe here Serves 6 The Umbrian town of Norcia is, among other distinctions, so famous for the skill of its pork butchers and the quality of their products that the term norcineria throughout Italy designates a shop that purveys pork and pork specialties of the highest quality—and nothing else. This is one of the memorable pork dishes that I discovered in Umbria recently. And though there are no sausages better than those made by an Umbrian Norcino in his hometown, this will be wonderful with any good quality sweet sausage available in yours. The name—Sausages in the Skillet with Grapes—describes the ingredients and cooking method perfectly. Just keep in mind that the cooking here is slow and gentle, not high- temperature grilling as one usually does with sausages. One quarter cup extra-virgin olive oil 8 plump garlic cloves, crushed and peeled 2 and a half pounds sweet Italian sausages, preferably without fennel seeds (8 or more sausages, depending on size) 1/2 teaspoon peperoncino flakes, or to taste 1 1/4 pounds seedless green grapes, picked from the stem and washed (about 3 cups) Recommended equipment: A heavy-bottomed skillet or saute pan, 12- inch diameter or larger, with a cover Pour the olive oil into the skillet, toss in the garlic cloves, and set it over low heat. When the garlic is sizzling, lay in all the sausages in one layer, and cover the pan. Cook the sausages slowly, turning and moving them around the skillet occasionally; after 10 minutes or so, sprinkle the peperoncino in between the sausages. Continue low and slow cooking for 25 to 30 minutes in all, until the sausages are cooked through and nicely browned all over. Remove the pan from the burner, tilt it, and carefully spoon out excess fat. Set the skillet back over low heat, and scatter in the grapes. Stir and tumble them in the pan bottom, moistening them with meat juices. Cover, and cook for 10 minutes or so, until the grapes begin to soften, wrinkle, and release their own juices. Remove the cover, turn the heat to high, and boil the pan juices to concentrate them to a syrupy consistency, stirring and turning the sausages and grapes frequently to glaze them. To serve family-style: arrange the sausages on a warm platter, topped with the grapes and pan juices. Or serve them right from the pan (cut in half, if large), spooning grapes and thickened juices over each portion. Lidia’s Chocolate Bread Parfait Pane di Cioccolato al Cucchiaio printable recipe here From “Lidia Cooks From The Heart of Italy” Serves 6 This recalls for me the chocolate and bread sandwiches that sometimes were my lunch, and always a special treat. And it is another inventive way surplus is used in Umbrian cuisine, with leftover country bread serving as the foundation of an elegant layered dessert. Though it is soaked with chocolate and espresso sauce and buried in whipped cream, the bread doesn’t disintegrate, and provides a pleasing textural contrast in every heavenly spoonful. 8 ounces bittersweet or semisweet chocolate, finely chopped 8 ounces country style white bread, crusts removed One half cup freshly brewed espresso 2 tablespoons dark rum 2 tablespoons sugar 1 1/2 cups chilled heavy cream 1 cup sliced almonds, toasted Recommended equipment: A large rimmed tray or baking sheet, such as a half- sheet pan (12 by 18 inches); a spouted measuring cup, 1 pint or larger; 6 parfait glasses or wineglasses, preferably balloon-shaped Put the chopped chocolate in a bowl set in a pan of hot (not boiling) water. When the chocolate begins to melt, stir until completely smooth. Keep it warm, over the water, off the heat. Slice the bread into half-inch-thick slices, and lay them flat in one layer, close together, on the tray or baking sheet. Pour the warm espresso into a spouted measuring cup, stir in the rum and sugar until sugar dissolves, then stir in half the melted chocolate. Pour the sauce all over the bread slices, then flip them over and turn them on the tray, to make sure all the surfaces are coated. Let the bread absorb the sauce for a few minutes. Meanwhile, whip the cream until soft peaks form, by hand or with an electric mixer. To assemble the parfaits: Break the bread into 1- inch pieces. Use half the pieces to make the bottom parfait layer in the six serving glasses, dropping an equal amount of chocolatey bread into each. Scrape up some of the unabsorbed chocolate sauce that remains on the baking sheet, and drizzle a bit over the bread layers. Next, drop a layer of whipped cream in the glasses, using up half the cream. Top the cream layer with toasted almonds, using half the nuts. Repeat the layering sequence: drop more soaked bread into each glass, drizzle over it the chocolate sauce from the tray and the remaining melted chocolate. Dollop another layer of whipped cream in the glasses, using it all up, and sprinkle the remaining almonds on top of each parfait. This dessert is best when served immediately while the melted chocolate is still warm and runny.

Grilled Pizza with Figs and Other Delights