I have my husband’s cousin Mario to thank for introducing me to pizza with potatoes. It was back in 1994, when we were visiting my husband’s relatives in Abruzzo, Italy, including Mario, who owns a bread bakery in a small town in the region, not far from the Adriatic Sea.  My husband’s family has been baking bread for generations in Abruzzo and my father-in-law carried the tradition to the new world, after he emigrated as a young man to a small town about 30 miles northwest of Philadelphia. Later in life, he was forced to close the bakery due to health problems and for many years that followed, people in town lamented the dearth of good bread available. To this day, you still can’t buy bread there that compares with what he was able to create from flour, water and yeast. 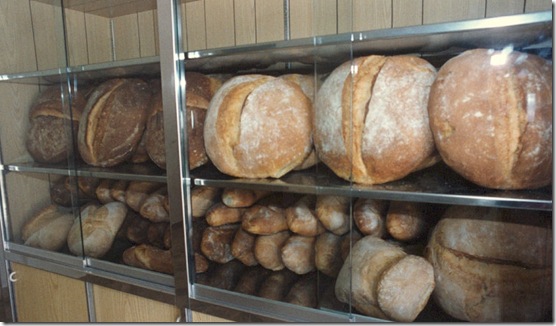 Bread at the family bakery in Abruzzo, Italy But let’s go back to Abruzzo. It was a Sunday afternoon, the only day of rest in a baker’s hard life, but my husband’s cousin Mario cranked up the ovens and mixed dough to make pizza for my family and a bunch of other relatives. We all helped out in the bakery’s kitchen, stretching the dough and spreading goodies on top of at least five enormous pizzas – everything from tuna to potatoes. It was one of those days you always remember, not just for the food, but the fun of everyone pitching in, having a great time together and feeling part of a tradition.  I have to admit that potato pizza sounded a little odd to me at the time, but after I tasted it, I became an instant convert. 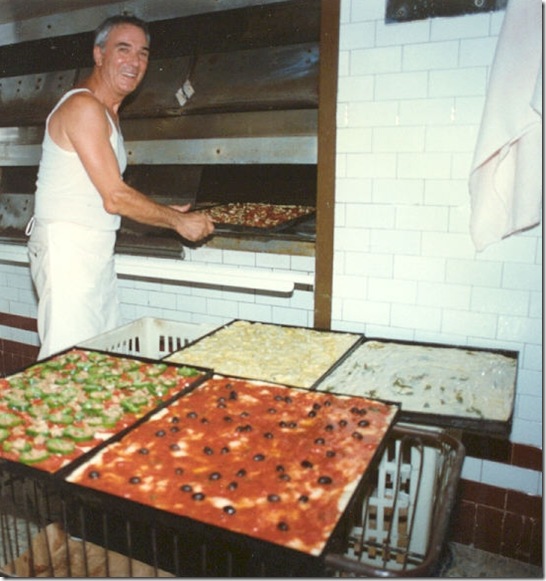 Mario and his pizzas in 1994  I’ve since eaten it in many places in Italy, and my favorite is at La Renella, a great little bread bakery in Rome’s Trastevere neighborhood, where they also make a dizzying array of delicious pizzas. On any given day, among the dozen or more varieties, you might find potato pizza with sausage bits, or potato pizza with zucchini flowers and mozzarella cheese, both of which are mighty wonderful. They’re more like a foccaccia with toppings – and very different from Neapolitan pizzas. I also like the potato pizza made by Jim Lahey – the owner of New York City’s pizzeria Co.,  as well as The Sullivan Street Bakery (now located not on Sullivan St., but on the upper West side), and creator of the no-knead bread recipe that made it possible to finally make really good, really crusty bread at home.  I have to give props also to GranDaisy bakery on Sullivan Street, which makes the same delicious pizza as Lahey – no surprise since it’s owned by Lahey’s ex-wife and the recipes not only survive the divorce, but thrive at GranDaisy. I always pop in for a slice before getting my hair cut at the Aveda Institute around the corner on Spring St. 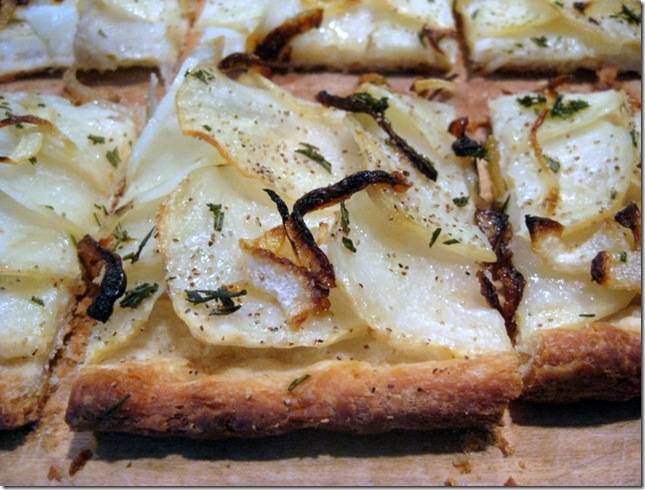 I was excited to see Lahey’s potato pizza recipe recently on How To Cook A Wolf and also glad to read that Lahey has written “My Bread,” a cookbook with many of the recipes from the bakery.  I made the potato pizza yesterday and it turned out exactly like what is available at the bakery – it’s not a really dough-y or thick pizza. It’s thin, crispy, crunchy and addictive. It’s great hot, cold or at room temperature and it’s appropriate for breakfast, lunch or dinner. I told you it’s addictive. 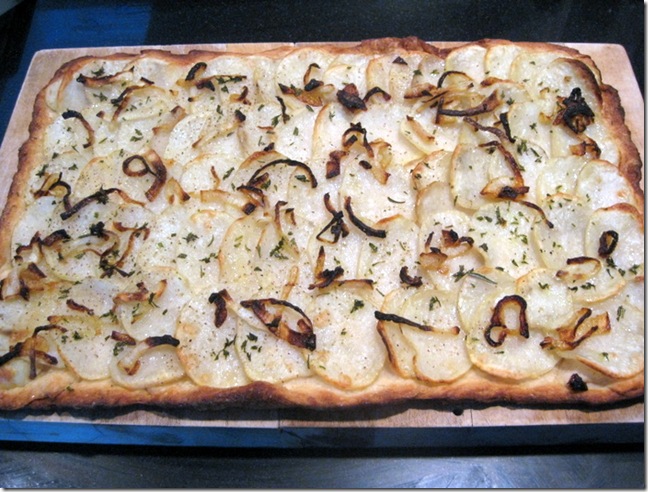 Basic Pizza Dough
Jim Lahey/My Bread Printable Recipe here
3 3/4 cups( 500 grams) bread flour
2 1/2  teaspoons (10 grams) instant or other active dry yeast
3/4 teaspoon (5 grams) table salt or fine sea salt
3/4 teaspoon plus a pinch (5 grams) sugar
1 1/3 cups(300 grams) room temperature ( about 72*F) water
extra virgin olive oil for the pans
1. In a medium bowl, stir together the flour, yeast, salt, and sugar
Add the water and using a wooden spoon or your hand mix until blended, at least 30 seconds.
The dough is a bit stiffer than most of the other doughs in the book, not as wet and sticky.
Cover the bowl and let sit at room temperature until the dough has doubled in volume, about two hours. (It took my dough about three hours to rise.)
2. Oil two 13 by 18 inch rimmed baking sheets (I used one large rectangular baking sheet and one smaller round pan). Use a bowl scraper or rubber spatula to scrape half the dough onto an oiled pan in one piece (I used about 3/5 of the dough in the larger rectangular pan and about 2/5 in the smaller, round pan). Gently pull and stretch the dough across the surface of the pan, and use your hands to press it evenly out to the edges. If the dough sticks to your fingers, lightly dust it with flour or coat your hands with oil. Pinch any holes together. Repeat with the second piece.
The dough is ready to top as you like. 1 quart/ 1 liter lukewarm water
4 teaspoons table salt or fine sea salt
1 kilo/about 2 pounds Yukon Gold Potatoes, peeled (I didn’t have Yukon Gold potatoes and used white baking potatoes and it turned out great.)
1 cup(150 grams)diced yellow onion (I sliced the onion and caramelized it by sautéing in olive oil first.)
1/2 teaspoon (2 grams) freshly ground black pepper
about 1/3 cup extra virgin olive oil 1/2 recipe(400 grams) Pizza Dough(recipe above) about 1 tablespoon (2 grams) fresh rosemary leaves (I chopped the rosemary)
1.Pre-heat oven to 500*F ,with a rack in the middle.
2. In a medium bowl, combine the water and salt, stirring until the salt is dissolved. Use a mandoline to slice the potatoes very thing(1/16 inch thick) and put the potatoes directly into the salted water so they do not oxidize and turn brown. Let soak in the brine for 1 1/2 hours(or refrigerate and soak for up to 12 hours) , until the slices are wilted and no longer crisp.
3.Drain the potatoes in a colander and use your hands to press out as much water as possible, then pat dry. In a medium bowl, toss together the potato slices, onion, pepper ,and olive oil.
4.Spread the potato mixture evenly over the dough, going all the way to the edges of the pan; put a bit more of the topping around the edges of the pie , as the outside tends to cook more quickly.
Sprinkle the pie with the rosemary.
5. Bake for 30 to 35 minutes, until the topping is starting to turn golden brown and the crust is pulling away from the sides of the pan. Serve the pizza hot or at room temperature.

Answers to Giveaway and Winner