Maybe you already know, but this pasta shape is called orecchiette. Orecchio means ear in Italian. The diminutive is formed by adding the ette, leaving you with little ears, which is what this pasta resembles.  They’re very popular in the region of Italy known as Puglia, or Apulia as it is sometimes called in the states.  Puglia is the southeastern region of Italy that forms the “heel” of the country’s “boot.” Puglia is not visited nearly as much as other parts of the country and that’s too bad because it’s got a lot going for it including beautiful beaches, great food and fascinating architecture. One of Puglia’s most intriguing towns is a place called Alberobello, where conical-shaped stone homes called trulli are omnipresent. Many of them are painted with symbols, as the one with the cross in the middle of this photo. 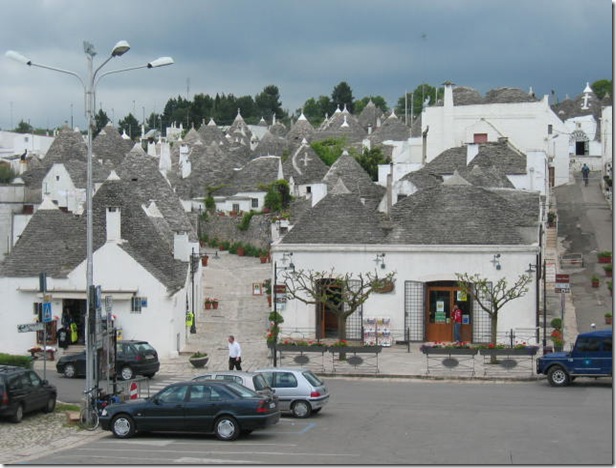 But back to the orecchiette, which are as common in Puglia as tortelloni are in Bologna. The first time I visited Alberobello, I ate the specialty pasta in a tomato sauce with friends who lived there.  I’ll take them any way they’re prepared, but my favorite way to eat them is with broccoli rape and sausage.  Lucky me to receive a package of these vacuum-packed handmade orecchiette made in Italy from my fellow blogger Stacey, of Stacey Snacks: 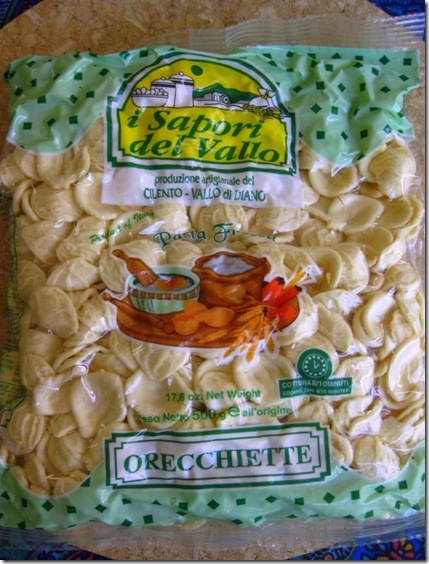 If you can’t find fresh ones, they’re available dry in packages too. This recipe takes about as long to make as it does to boil pasta, so have everything ready at the beginning. I start by peeling the lower part of the broccoli rape, which makes it more tender and less bitter. You should get the water boiling at this time and fry your sausage too. I usually cook the broccoli rape in the same pot with the pasta. It saves another pot, but you have to time it right so you don’t get overcooked broccoli rape, or overcooked pasta. Here’s the whole recipe. Like so many of my recipes, I don’t really measure, so don’t be so worried if you’ve got a little too much of this or not enough of that. It’s not like baking a cake, where measurements have to be exact. Orecchiette With Broccoli Rape and Sausage printable recipe 1 package of orecchiette (about 1 lb.) 1/2 large bunch of broccoli rape, trimmed olive oil two garlic cloves, minced 1 pound sausage red pepper flakes parmesan cheese salt Take the casings off the sausage and fry it in a little olive oil, breaking it up into bits. When the sausage is almost cooked, add the garlic and saute. Meanwhile, start the water to boil for the pasta and add a bit of salt. Trim the broccoli rape, peeling the lower part of the stalks. Cut the stalks into two or three pieces, depending on how long they are. Put your pasta into the boiling, salted water and give it a stir. Depending on the thickness of the orecchiette and the broccoli rape, you can add the broccoli rape to the pot and cook them at the same time as the pasta. When cooked, I scoop the pasta out with a metal “spider” and place the pasta and broccoli rape it directly in the pan with the sausage, which should be thoroughly cooked by now. Some of the water will come along with the pasta and the broccoli rape. You want that to help develop a “sauce.” But note, this does not really have a juicy sauce per se.  Add the red pepper flakes, salt and pepper and more pasta water as needed. Stir everything together, then finish with a sprinkling of parmesan cheese and another splash of olive oil to finish. 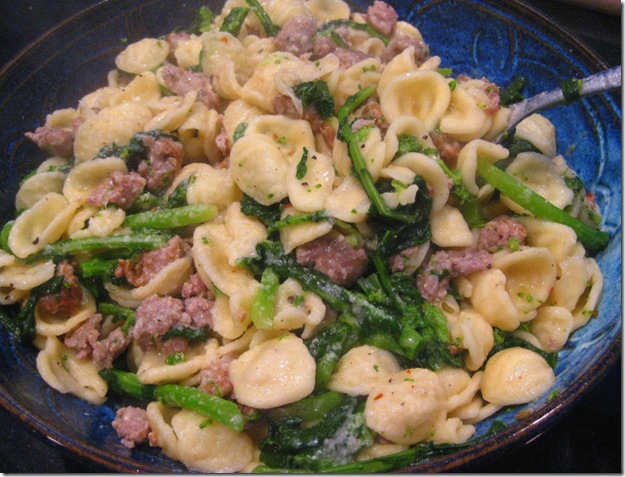 No food in this post, unless you count water - and…

If I'm going to indulge at breakfast, it's likely to be pancakes…

I don't own a home in the Tuscan countryside, but I've got…