Who doesn’t love pomegranates, bursting with those colorful, flavorful, juicy seeds? OK, so maybe they’re a bit tedious to eat, but when you bite into a chunk of those juicy seeds, it’s like a party in your mouth. Add to that the crimson orb’s symbolism, captured over the centuries by artists and poets.  Here’s an example from Botticelli, in a detail from his painting of the “Madonna of the Pomegranate” at the Uffizi Gallery in Florence: 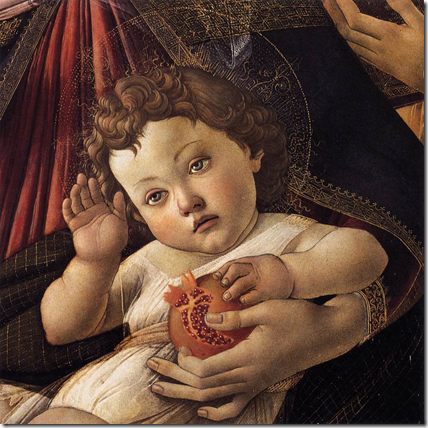 In the printed word, let’s not forget the Bard himself, and his reference to pomegranates when Juliet tries to convince Romeo that daybreak is far away.  Juliet insists to Romeo that it wasn’t morning’s lark he heard, but the nightingale: “Nightly she sings on yond pomegranate tree. ” And anybody who knows me knows my weakness for Italian pottery, so it should come as no surprise that I bought this lovely hand-painted pitcher with a pomegranate design at a shop in Vasto, Italy last year. 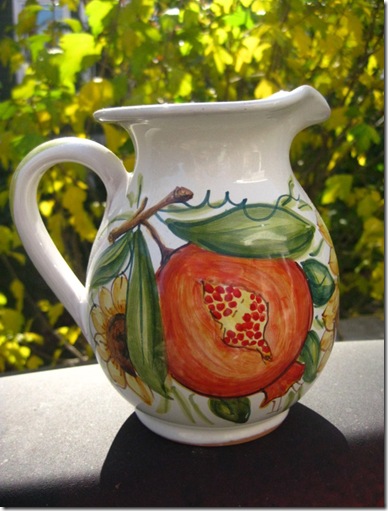 When the folks at POM contacted me and offered me a free case of their 100 percent pomegranate juice, how could I say no when I love pomegranates so much?  Aside from their great taste and artistic value, pomegranates are a great source of potassium and contain loads of antioxidants, an important anti-cancer agent. I’ve been enjoying a bit of POM each morning in a smoothie, and have been eating lots of fresh pomegranates too, but with some duck breasts in my freezer waiting for a good recipe, and that fresh pomegranate juice, the time to get creative had arrived. I opened a bottle of the POM juice and combined it with some orange juice, balsamic vinegar and Italian prune plums in what turned out to be an easy, but perfect-enough-for-company dish.  The duck came from a place near me called Griggstown Quail Farm, which sells free-range poultry, including chickens, quails, partridge, ducks and turkeys with no added hormones or antibiotics.  But you don’t have to live near Princeton, N.J. to enjoy their products. They’re distributed to many high-end restaurants and markets in New Jersey and New York, many under the name D’Artagnon. If you’ve never cooked duck, don’t be scared. Cooking the breast is much easier than cooking the whole bird, provided you follow a few instructions given here. Otherwise, you could end up with a grease fire from all the fat that duck skin releases.  For this recipe, you need to render some of the fat on the outside of the duck breast, by scoring it and cooking it on the range at low heat in a heavy duty pan. I use a cast iron skillet. Keep it at low heat, otherwise you risk burning the outside fat layer before the bulk of the skin has had a chance to melt and render off. 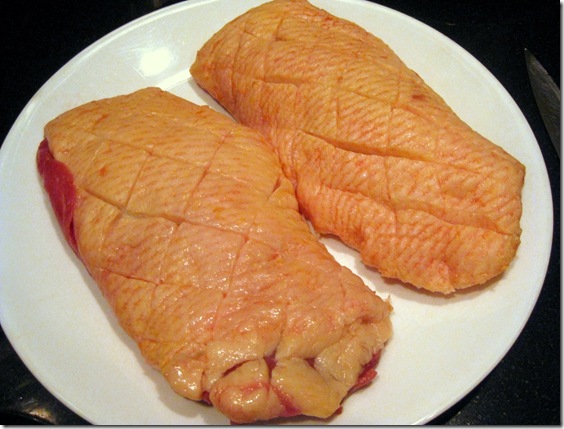 After the skin has cooked at low heat for about 15 minutes, you should have a nice color on the outside of the fat, but the inside meat will still be raw. 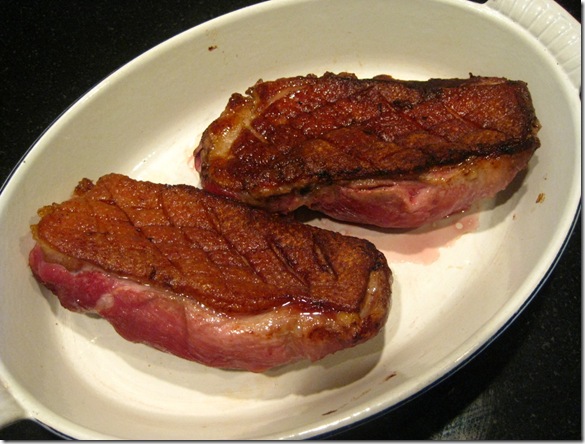 Pour in the sauce you’ve prepared around the meat and roast everything in the oven, following the instructions below. Then when it’s roasted the appropriate time, you’ll remove the pan from the oven, take out the breasts and keep them warm. They need to rest a bit before slicing anyway. While they’re resting, place the pan with the liquid over the range at high heat to reduce the sauce. When it’s reduced, pour the sauce in a serving dish, slice the duck breast and serve. 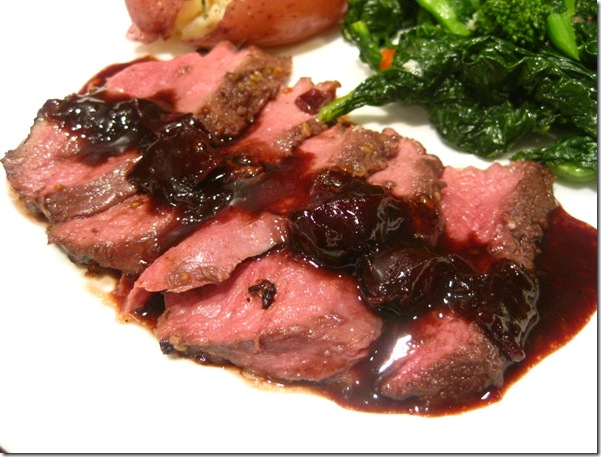 Duck Breast with Pomegranate Plum Sauce Printable Recipe Here 1 duck breast, about 1.1 pounds (This serves about two people) 2 Italian prune plums, diced 1 cup POM pomegranate juice 1/2 cup orange juice 1/4 cup white or dark balsamic vinegar (I have used both – they’re both fine, but the dark gives you a browner color. It’s what I used in these photos.) 1 T. butter Score the fat side of the duck with a knife. Place in a heavy skillet (I used cast iron) fat side down. Cook over low heat, letting a lot of the fat render out. From time to time, pour the fat into a jar. Store the fat in the refrigerator to use in other recipes, if desired. Keep doing this for about 20 minutes. By then a lot of the fat will be rendered out, and the remaining fat on the duck should be browned. Remove the duck breasts to an oven-proof casserole. In a separate pot, heat the pomegranate juice, orange juice and balsamic vinegar. Bring to a boil. Cook at high heat about 10 minutes. Pour the sauce (it will still be thin) over the duck breasts that are in the casserole. Place the casserole in a 400 degree preheated oven. Cook 8 minutes for rare meat (pictured above) or 10 minutes for medium rare. After the allotted time, remove casserole from the oven and remove duck breasts from the casserole onto a carving board. Cover to keep warm while you reduce the sauce. To reduce the sauce, place the heatproof casserole over a high flame and add the diced plums. Boil for about 10 minutes or until the liquid starts to thicken and become almost syrupy.  Don’t let it get too thick or it won’t pour properly.  Add the butter, stir until melted and blended with the sauce, and serve alongside the meat.

All meatballs are not created equal. Some were meant for tomato sauce…