They came from different worlds but were meant for each other – like Othello and Desdemona, Romeo and Juliet, and Miss Piggy and Kermit.  In this case however, I’m talking soup, not fictional characters, where there’s no tragic ending – at least not until you get to the bottom of the bowl.   They couldn’t be more different – sweet butternut squash soup and spicy black bean soup. Each delicious by itself but together in one bowl the mixed marriage is spectacular. A visual delight to be sure, but the flavor sensation when two disparate tastes combine is what really counts – and this one is truly inspired. It was probably more than 15 years ago when I tasted a similar soup at a now defunct restaurant in Princeton, whose name escapes me. I’ve been making butternut squash soup for years, but the idea of two different soups in one bowl has been germinating since I ate at that restaurant so long ago. I finally got to it this week with the advent of fall weather. I posted my recipe for squash soup a while ago, and you can find it by clicking here.  Below is my recipe for the black bean soup. Either of these is great individually, but together they make a beautiful and delicious presentation. I don’t know about Juliet or Desdemona, but I’ll bet Miss Piggy would love it for sure. After you’ve made both of the soups in separate pots, pour some of each into a glass measuring cup, or a pitcher, or some other container with a spout. Holding one container with one soup in your left hand, and another container with the other soup in your right, slowly begin to pour the soups into a bowl at the same time. You’ll soon see that if you pour quicker with one hand, more soup will land on that area of the bowl. To get the yin-yang effect, aim the spout of the container in the area where you want the “bulge” and pour a little more soup from that container. To finish the effect, drop a teaspoonful of each soup on the widest part of the opposite side soup. Black Bean Soup printer-friendly recipe here 2 13-ounce cans black beans 3 T. olive oil 1/2 medium onion, minced 1 garlic clove, minced 1/4 cup minced green bell pepper 2 medium tomatoes, skins removed 3 cups chicken broth 1/2 teaspoon cumin 1/4 teaspoon oregano salt, pepper to taste Remove the skins of the tomatoes by blanching them in boiling water for a couple of minutes. Let them cool until you can handle them, then slip off the peel and quarter the tomatoes. Rinse the “goo” off the beans by placing in a colander and running water over them. Saute the onion, garlic and green pepper in the olive oil until softened. Add the beans, tomatoes, chicken broth, cumin, oregano, salt and pepper. Let everything simmer together for 1/2 hour, then puree it, either in a blender, or with a stick blender. Eat it by itself, or in a bowl of yin-yang soup with butternut squash soup. To experience the blended tastes, pick up a little bit of each soup in each spoonful. 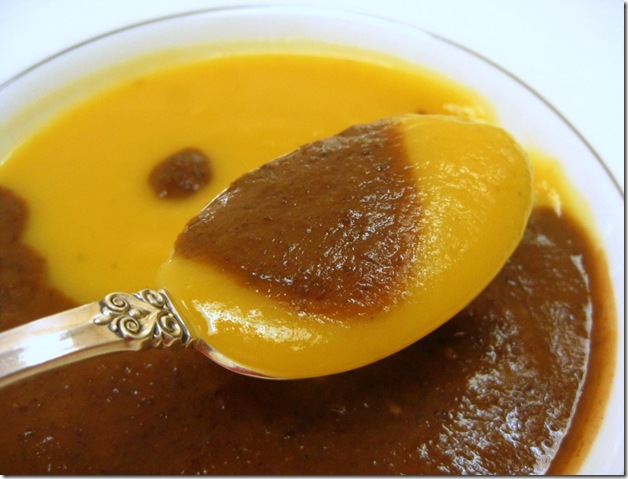 We Interrupt This Blog For A Semifreddo break