Involtini is the Italian word for any stuffed, rolled meat or even seafood, such as the omnipresent swordfish involtini popular in Sicily.  This recipe for pork involtini came about after a visit to Costco, where I bought what I thought was one pork tenderloin, but it turned out to be two – way too much for two people to eat at one meal. Even one of them was excessive for us, so I roasted only half of it, but wanted to try something different with the rest. The mozzarella in my fridge and the sage growing outside gave me the inspiration for this dish, which freezes extremely well. Since I’m still hobbling about (on only one crutch at this point), having a little back up in the freezer has been much appreciated.  These may not be the most photogenic, but they’re positively succulent, tender and flavorful. You barely need a knife to cut through them. It’s important to start out with a pork tenderloin – not a pork loin. The tenderloin is the small roast that’s the most tender part of the loin, as its name suggests. There’s very little fat and no bone, so there’s no waste. A small 2 1/2 pound roast will feed a lot more people than you think, especially when flattened out and rolled up for involtini. I made 12 involtini from only half the piece of pork (about 1 1/4 pounds). The full roast would have yielded 24, enough to satisfy six normal appetites. Slice off pieces about 1/2 inch thick and flatten them further between sheets of plastic wrap. 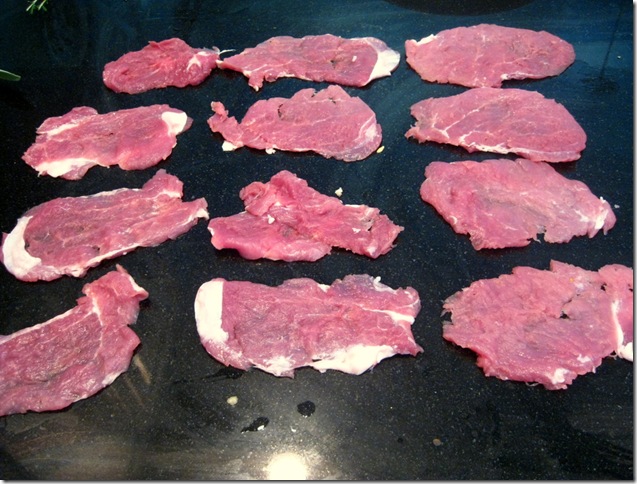 Season with salt and pepper, sprinkle with mozzarella cheese and place a sage leaf on each piece of meat. 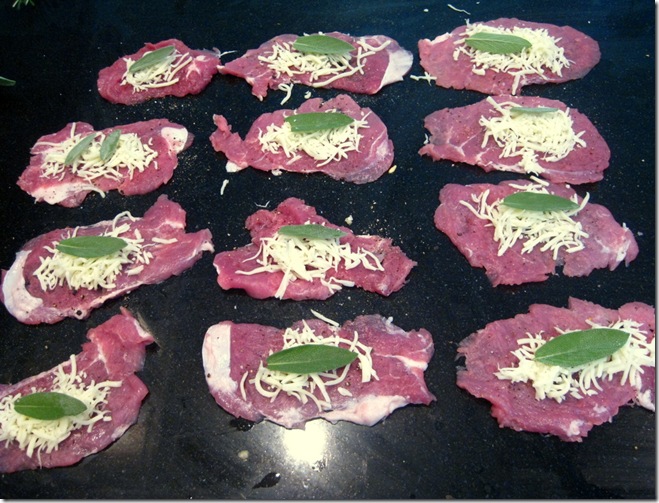 Roll them up and fasten with a toothpick. 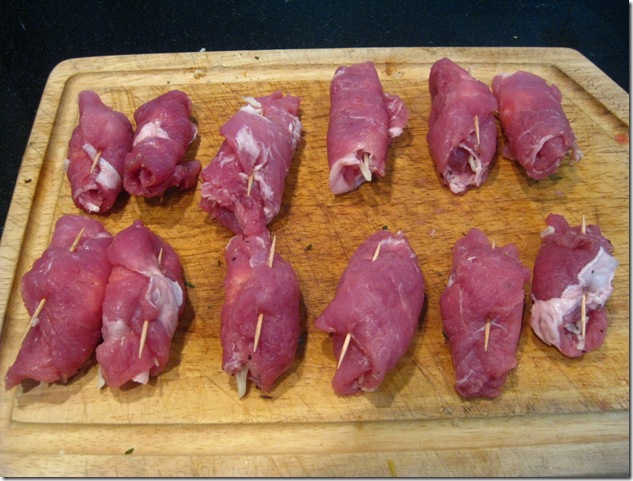 Dust lightly with flour, seasoned with salt and pepper. Place olive oil in a pan and add chopped onion and garlic. Saute until wilted, then remove from the pan and set aside. Add a little more olive oil to the pan and add the pork involtini, sauteeing until some color develops. Add some white wine, chicken broth, more salt and pepper and simmer for 20 minutes, turning occasionally. They’re done and ready to eat or put in the freezer. 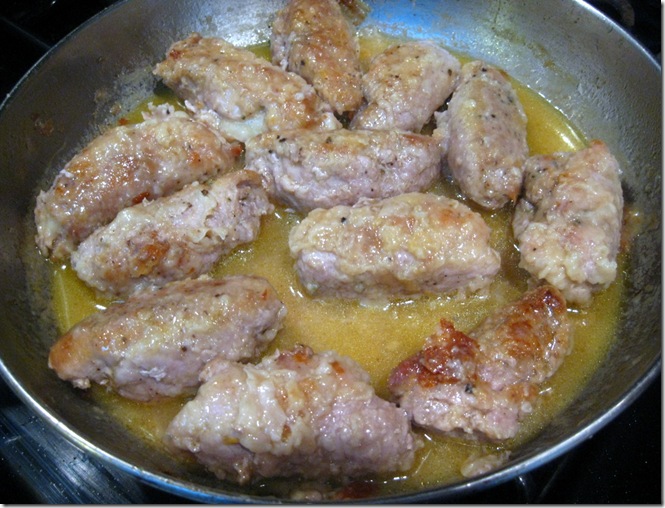 After they thaw out from the freezer, reheat in a pan on the range or in the oven. 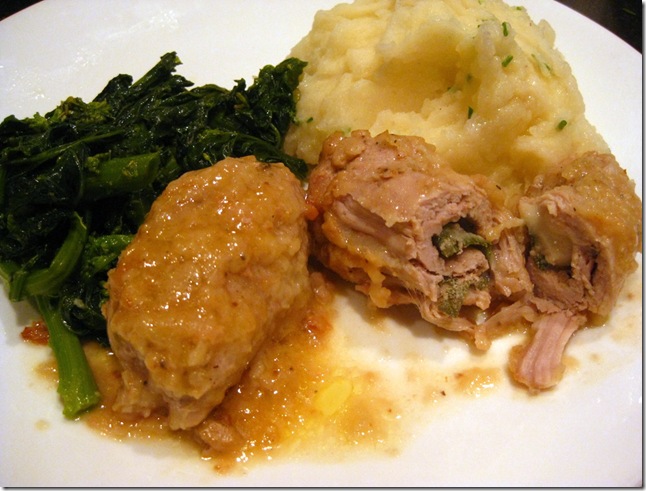 Pork Involtini Printer-friendly recipe here pork tenderloin (about two and a half pounds – this will give you about 20-24 involtini) flour for dredging salt, pepper grated mozzarella cheese (or fontina) fresh sage leaves 1/4 cup olive oil 1/2 stick butter 1/2 cup minced onions 2 garlic cloves 1/2 cup dry white wine 1 cup chicken broth Slice the pork tenderloins into pieces about 1/2 inch thick. Flatten them between a couple of pieces of wax paper or plastic wrap, using a mallet or meat pounder. Season with salt and pepper. Place a small amount of grated mozzarella cheese and a sage leaf on each piece of meat. Roll up and fasten with a toothpick or two. Dredge lightly in flour seasoned with salt and pepper. Heat half the olive oil and butter in a pan, and saute the onions and garlic until wilted. Remove from heat. Place the rest of the olive oil and butter in the pan and add the involtini. Saute at medium heat, turning them once, until they develop a golden color. You don’t need to cook them through since they’ll cook further in the liquid. Add the white wine and chicken broth, season with more salt and pepper, and cook for 20 minutes more.  Some of the filling may ooze out, but not enough to worry about. Just stir it into the liquid and it becomes part of the sauce. Remove toothpicks before serving.

If you’re like me, you’ve got a lot of leftovers from Thursday’s…

Orecchiette with Sausage and Broccoli Rape

Maybe you already know, but this pasta shape is called orecchiette. Orecchio…