Grab yourself a cup of tea and pull up a chair. This is going to be a long one. Only because I want you to make homemade pasta and I’m going to take you through the process step-by-step, so you’ll have no excuses. I’ll let you off the hook if you don’t have a machine to roll out the pasta – only because rolling by hand is not easy. That’s because I use semolina flour in addition to regular unbleached flour. Semolina, the inner, granular, starchy endosperm of hard wheat, has a lot more gluten and will give the pasta more bite.  After the finer particles in the flour have been sifted out, what’s left is the grittier, coarser semolina. I used to make pasta with only regular flour and it’s good, but after you’ve boiled the pasta and drained the hot water, it sort of plops into the colander in one tangled mass –  the pieces are ornery and want to stick together, even though you haven’t overcooked it. There’s no real “toothiness” to it.  Semolina changes all that and gives you real “spring” in the pasta. I buy semolina flour in bulk at a local health food store, but it’s also available in small packages at our supermarkets, next to the packages of quick-cooking polenta. I also just found out that the flour maker King Arthur makes a “Perfect Pasta Blend” that includes semolina, durum and all-purpose flours. I haven’t tried it yet, but it’s available by mail if you can’t find it in stores. Semolina, which is also what I use when I make gnocchi alla romana, is much more yellow than regular all-purpose flour, as you can see in the photo below: 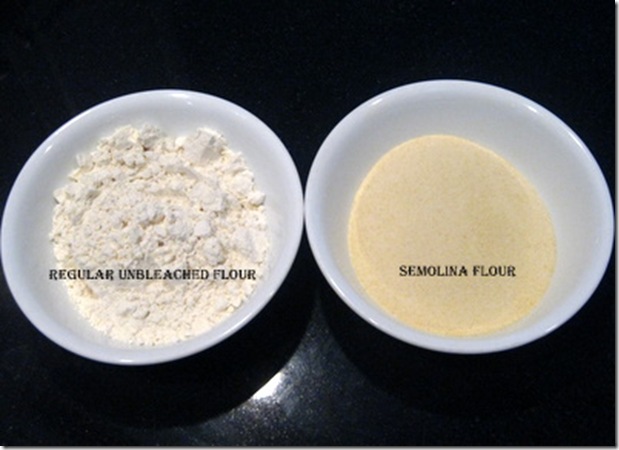 Once you have the semolina, the only other ingredient you need is eggs. I know a lot of recipes also have you adding water or olive oil, but not mine. Mine is made the way it’s made in Emilia-Romagna, where my mother and her family are from. I don’t even add salt. You add salt to the boiling water later. Here is a photo of how I used to make pasta for many years – the way it’s done in Italy by little old grandmas and the way many traditionalists still make it here. Start with a wooden pasta board. In this case, I inherited a fabulous pasta board from my mother-in-law. It’s probably at least 75 years old and has some cracks in it. But it’s humongous and filled with memories so I’ll ask my husband to keep repairing the cracks until they can’t be repaired any longer. Now most of you probably don’t have a pasta board, so use a large wooden chopping board – or just your counter top. But a wooden board is preferable because it gives the pasta more texture in the final product – useful for having the sauce cling to it. OK, so you make a little mountain with the flour and then make a well in the center –now you’ve got a mini Mount Vesuvius. Crack the egg into the well and start beating the egg with a fork, pushing against the flour with your other hand to hold the volcano wall from collapsing.  The flour eventually gets amalgamated with the egg and becomes too dense to work with the fork. At that point, you have to use your hand. 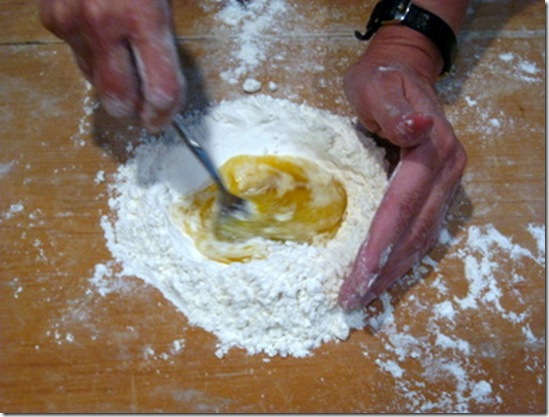 In the photo above, I used only one cup of flour and one egg. I did this just to show you what it looks like to do it by hand. But after making it this way for years, I then saw Lidia Bastianich mix pasta dough in the food processor and life as I knew it ceased to exist. If my food guru can make it in the food processor, so can I. And so can you. But if you want to be a purist, or just want the experience of making it on the board, give it a whirl. But I’m telling you – mixing pasta dough in the food processor is like finding the Holy Grail, the meaning of life, and George Clooney’s phone number all at once.

Add the semolina, and the regular all-purpose flour to the processor, along with the eggs. Give it a whir until a ball starts to form. When you’re adding the flour, it’s best to hold some back because if you add too much in the beginning, it’s very difficult to form a good ball of dough. It’s always easier to add more flour if the dough is too sticky. In the photo above, the dough forms a ball, but there’s still a little clinging to the side of the food processor bowl. You can remove it from the bowl and put it on your board and start kneading in a little more flour until it’s no longer sticky. You can use the same recipe each time you make dough, but it can come out different each time. That’s because a lot is dependent on whether you use large eggs, jumbo eggs or small eggs and whether it’s a humid or a dry day. When it’s humid, you’ll find you need more flour. When it’s dry, you’ll need less. It takes practice but eventually you’ll get a “feel” for it. Now you knead the dough. Press your palm into the dough and push it into the board away from you. 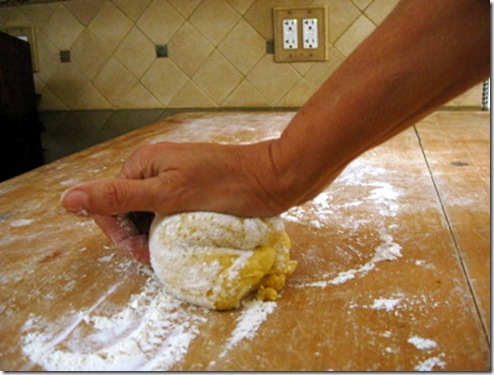 Pick up one end of the dough and fold it over the other end. 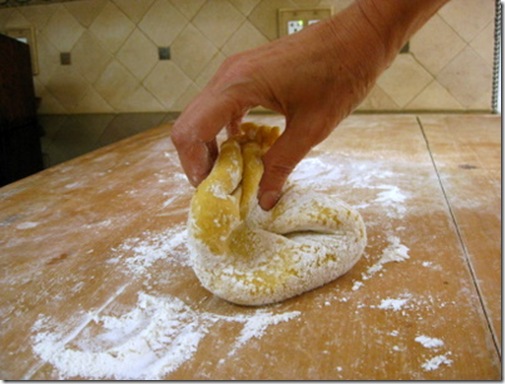 Then smush it down into the board using your palm like you did before. 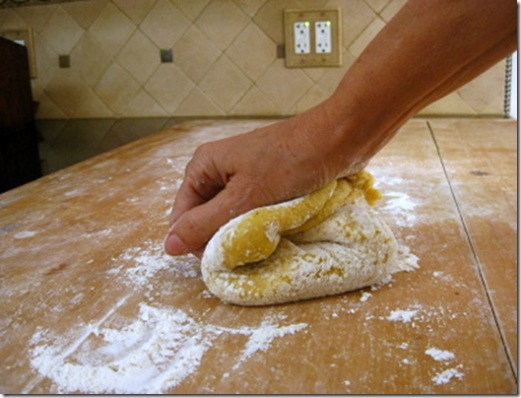 After you’ve kneaded it on the board for five minutes or so, the dough will start to feel a little smoother. But it needs to rest for at least a half hour to an hour more before you can roll it out. That allows the glutens to “relax.” I cover the dough with a bowl, but you can wrap it in plastic wrap if you like. After a half-hour or so, you’re ready to start rolling. I use a pasta machine, something that would be considered heresy to my cousin Lucia in Italy who use a mattarello (or a very long rolling pin). She’s also the one I told you about a while ago who won the Miss Tagliatella contest in her region, so you can see I’m a novice compared to her. I’m sure she’d think I was taking the easy route by using a pasta machine. Until she gives me some pointers and until I get a mattarello, (my husband has promised to make me one), I’ll continue to use the pasta machine and I’ll bet you will too. Cut off a small portion of dough and keep the rest covered. This pastry cutter is in the picture just to give you some perspective on the size of the dough to start with. It’s a piece about the size of a half a cupcake probably. 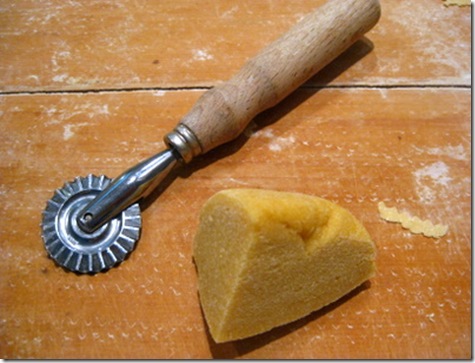 Then smush down the piece with the palm of your hand to flatten it. This will make it easier to initially push through the machine. 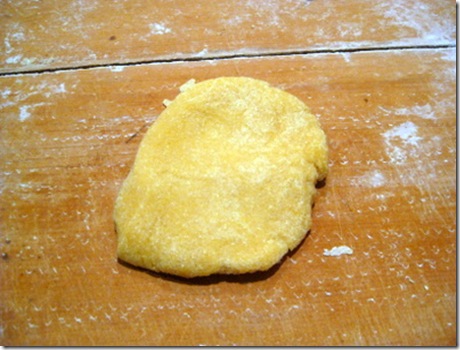 Keep some flour on the board and pat the piece on both sides with some flour. Start by coaxing the dough through the largest opening of the pasta machine. On mine, it’s the #1 opening. Here’s what the dough looks like after the initial pass through the machine and just before I am ready to put it through the #2 slot: 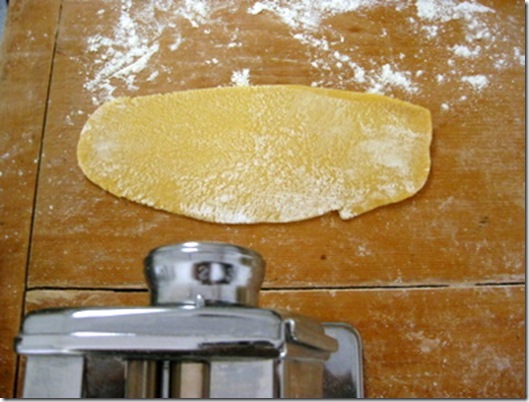 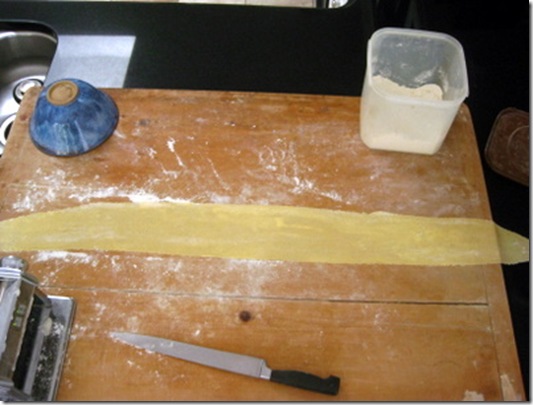 The dough should be resilient, but thin enough that you can almost see through it. At least that’s how I like it. You may like it thicker, or even thinner, at the #7 setting. 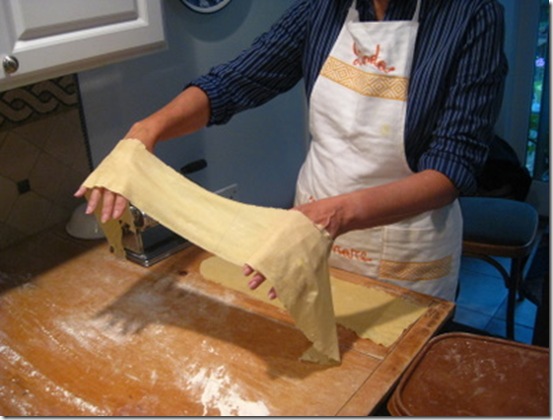 At this point, you have to decide what shape pasta you want. If you want pappardelle, cut them by hand, using either a knife, or a pastry wheel. I like to make pappardelle about an inch to an inch and a half wide and I use a ruler to guide me in cutting along the long edge. 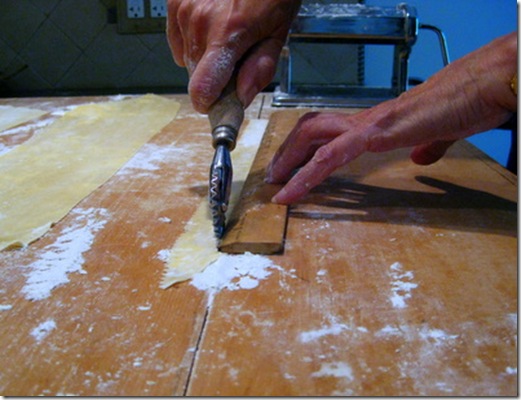 For lasagna, keep the entire width of the pasta as it comes out of the machine, trimming the edges to make them even: 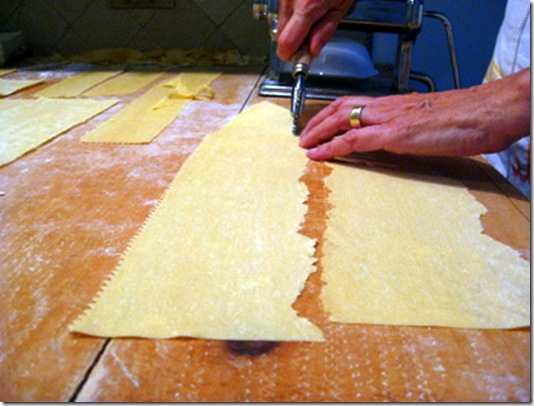 To make  tagliatelle or fettuccine, I feed the dough through the attachment that came with the pasta machine. 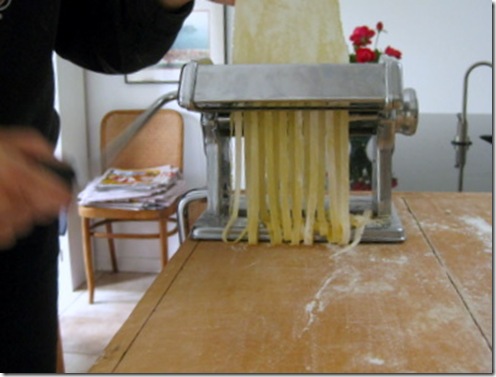 You can also make even thinner pasta – tagliolini – with the attachment: 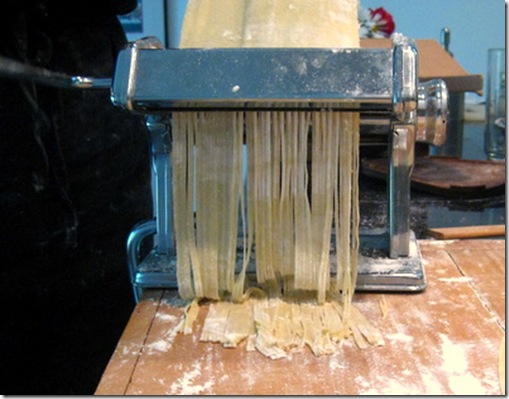 You need someplace to put all this pasta while you finish rolling out the rest and clean up. If you’re pressed for space, hang a coat rack over your kitchen cabinet door and use paper-coated coat hangers like this: 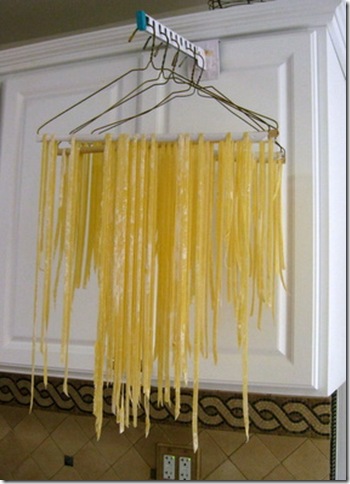 Otherwise, put some flour on a board and make little “nests” of the pasta. This allows you to store whatever you don’t use much more easily. 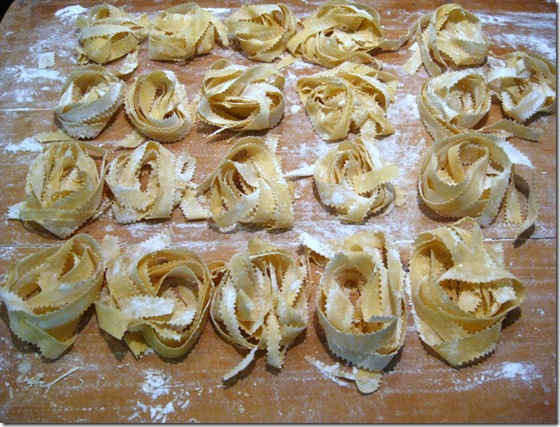 If you’re not using it right away, make sure to dry it completely before storing it, otherwise it can turn moldy in a plastic bag or container. Now serve it up with your favorite sauce, maybe even my mushroom truffle cream sauce. The first time you make homemade pasta, it may take you a couple of hours to make a batch large enough for four people, but as you become more proficient, you should be able to complete the work in 1/2 hour (not including time for the dough to rest). Thanks for hanging in through this long post. Homemade Pasta Recipe: Printable recipe here Enough for about four servings: 3/4  cup semolina flour 3/4 cup unbleached white flour 2 large eggs Place most of the semolina and regular flour into a food processor bowl. Keep about 1/4 cup of the flour or semolina aside. Add the eggs, then pulse the ingredients until a ball starts to form. Add more flour or semolina if it seems too sticky. Put on a board and knead, adding more flour as needed. Let it rest under a bowl, or covered with plastic wrap, for at least a half hour. Work the dough through a pasta machine per instructions with the machine. Make sure to flour the dough as you make each pass through the rollers, so it won’t stick.

Quinoa Salad and Perils in Peru