I wish I could say I grew these beauties, but our pathetic fledgling tree sprouted only five figs this year, and those stubborn little babies don’t seem inclined to want to ripen. I think they’d prefer to be basking in the sun somewhere along the Amalfi coast rather than in New Jersey and I can’t say I blame them.  Good thing I have friends with a plethora of fig trees that do cooperate and produce more than they can eat. I’m happy to relieve them of any excess. Last year, a friend gave me a basketful of a green variety. This year however, a different friend gave me these intensely purple figs. Look at the beautiful interior of this fig, dripping with juice. I knew instantly that I wanted to capture the essense of this gorgeous fruit in a fig jam, to savor all year long. 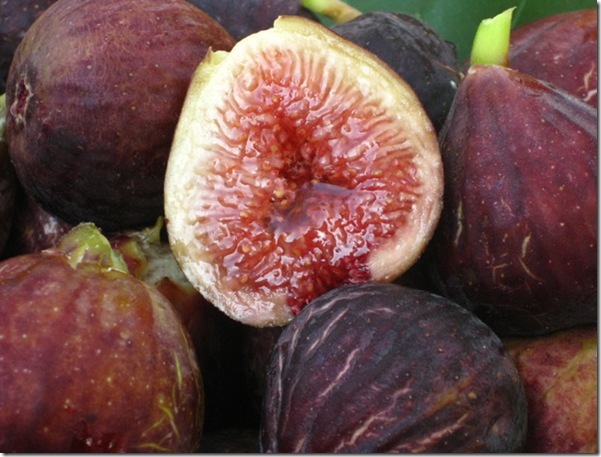 My favorite way to eat fig jam is in a crostata in this recipe, or in the almond jam bars I recently posted. 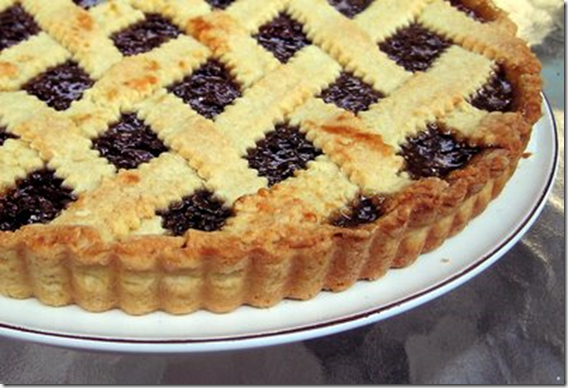 But first you’ve got to have the jam. You can always buy it in specialty shops, but it’s infinitely better made from scratch. It’s not really hard either. The hardest part is getting your hands on some figs. But for a short time still, they’re available at good grocery stores and farmer’s markets. So get moving, because my next post is a recipe using fresh figs too. You hear me Stacey, you figaholic? This one’s for you! But right now, let’s start the process of making fig jam. First, wash your jars with soap and water, then set them to boil in a large pot. My jars were not all the same size. I just used what I had in the house. 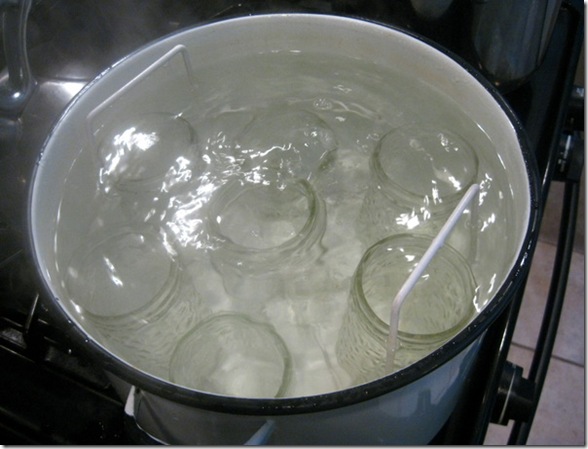 You should also have the lids boiling. It’s not necessary to use a separate pan, but I did because it makes it easier to fish them out of the water when they’re not at the bottom of a large pot. 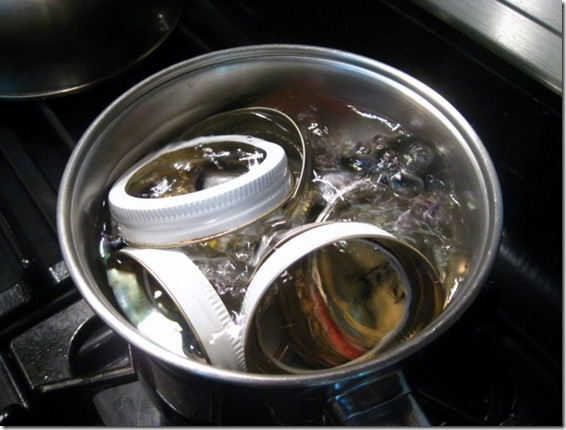 Now back to the figs.  Cut up about five cups (four heaping cups is fine) of figs. They don’t have to be in really small pieces because cooking them will reduce their size anyway. I like some chunks in the jam, but if you prefer really tiny bits, you can mash them while they’re cooking with a potato masher. 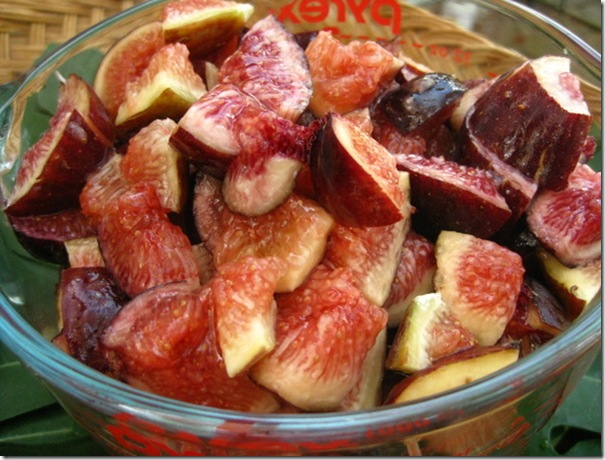 Add the figs to a pot with a 1.75 ounce box of powdered pectin. (liquid pectin is fine too, but follow the directions given) Add 1/4 cup fresh lemon juice and 1/2 cup water. Stir over high heat until everything is dissolved. Boil for a couple of minutes. 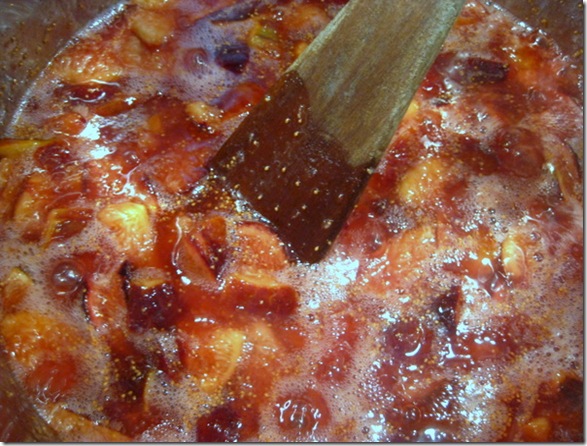 Add 7 cups of sugar (I know it’s a lot but it’s really necessary in order to get the right “gel”). Bring to a rolling boil, turn it a little lower and let it gently boil about one or two minutes. Some people add ginger or cinnamon or other spices, but I prefer mine without any added spices. 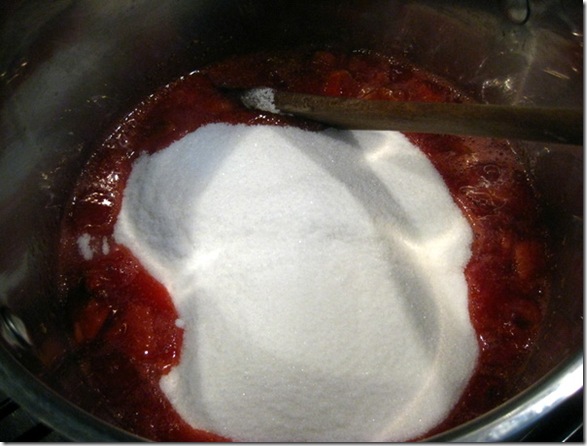 You’ll see some “scum” or foam form at the top of the liquid. It’s perfectly good to eat but not so pretty to look at in a jar of jam. Some recipes call for a little butter to help reduce the scum, but I prefer to just skim off the scum. (Hmm, skim off the scum – now there’s an interesting phrase for you.) 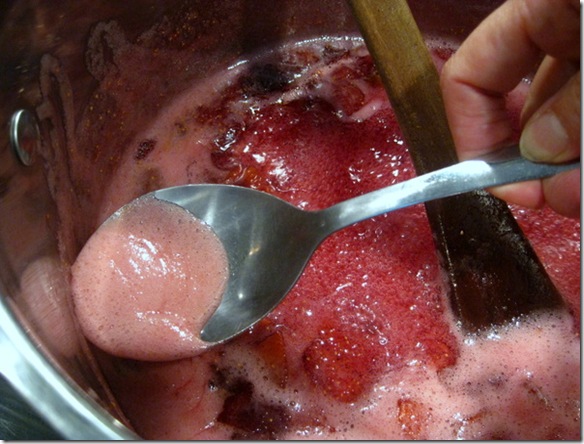 After I’ve skimmed off the scum and it’s cooked long enough, I add some brandy to give it a little “rounder” flavor. Totally optional, but I think it counters the sweetness of the jam. When the jam seems ready, turn off the heat and let it sit in the pot while you drain the jars onto clean dishtowels. Don’t drain the pot of the hot water though. You’ll need it to process the jam. 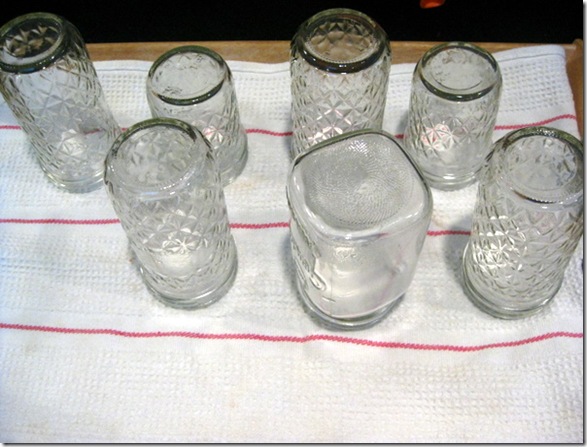 How do you know when the jam is ready to pour into jars? Here’s one method: Before your very first step in making the jam, place a small dish in the freezer. When the jam is cooked, take the plate out of the freezer and drop a spoonful of jam on it. Swirl the jam around with a spoon and you’ll be able to see the consistency and tell if it’s gelled or not. Cook it longer if it’s not thick enough to your liking. 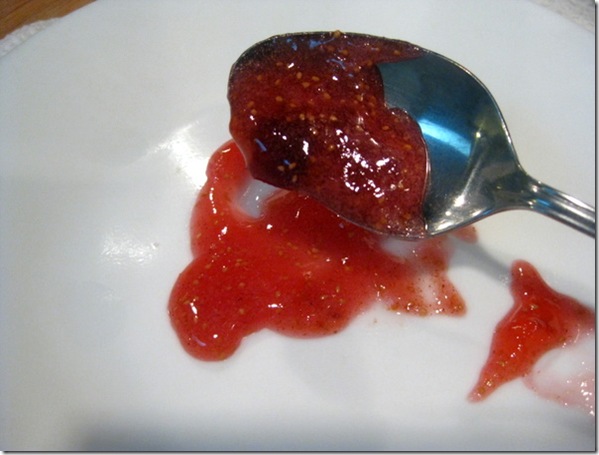 Scoop the jam into the jars with a ladle, or buy a special large-mouthed funnel made for this purpose. I do own such a funnel, but today because I’m making jam,  it’s nowhere to be found, naturally. I’ll be sure to stumble across it tomorrow. After you scoop the jam into the jars, wipe the top clean so you don’t have sticky jam dribbling where the lids will be placed. 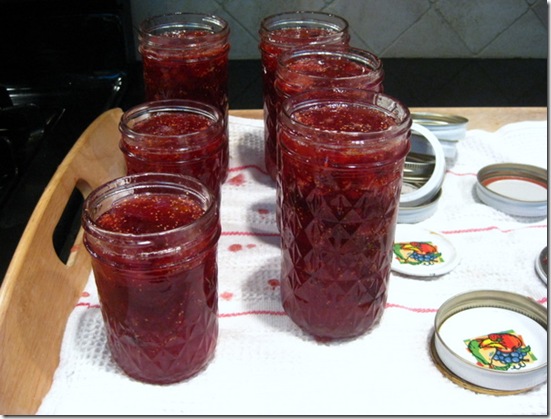 Place the lids on the jars and screw them on loosely. Place the jars (careful, they’ll be hot) in the pot of boiling water. There are special gizmos for lifting hot jars and this time I got lucky and found mine. If you don’t have one, you can try using tongs, or a pot holder. 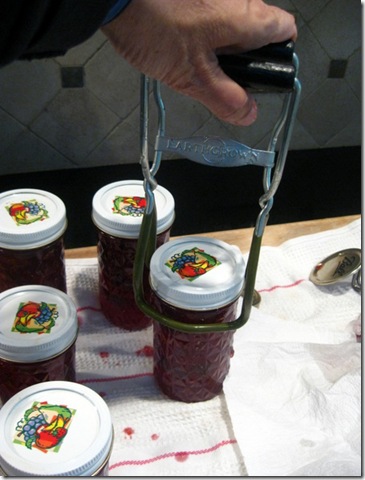 Make sure there’s at least one or two inches of water above the jars. Place the lid on top and let the jars simmer for 10 minutes. 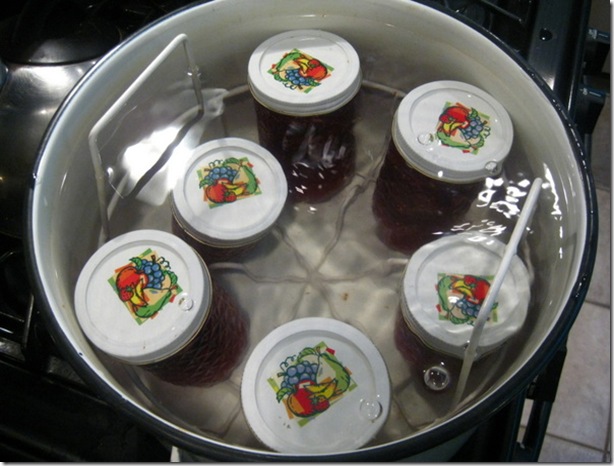 Take them out of the water and tighten the lids. You may hear a “pop” sound immediately or after a few seconds. That means you’ve got a good seal. Let the jars sit undisturbed for a half-hour. The fruit bits are likely to want to rise to the top. To distribute evenly, turn the jars every half hour until the jam has settled. This is the result, all ready for your toast, your crostata or for gift-giving. 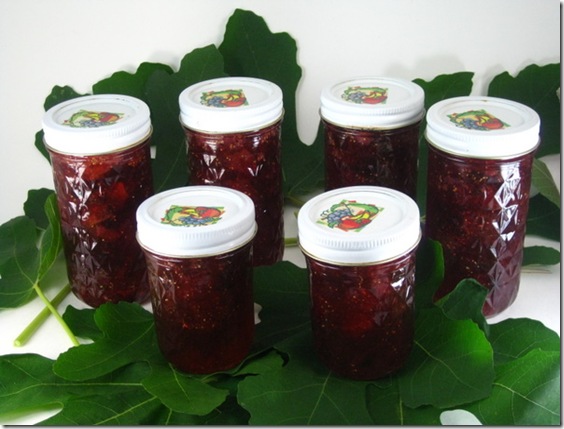 You can prettify your jars if you plan to give them as presents. 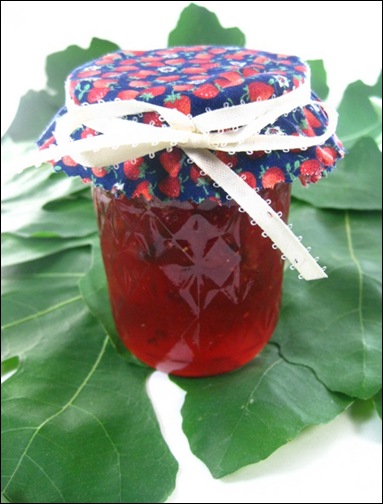 For more information, check out this website: http://www.pickyourown.org/figjam.htm Fig Jam Printable Recipe 5 cups figs, trimmed of stems 1/2 cup water 1/4 cup lemon juice 1.75 ounce box powdered pectin (like Sure-Jell) 7 cups sugar 2 T. brandy, optional Cut up the figs into quarters. Place in a large pot with the water, lemon juice and pectin. Bring to a boil and boil for a couple of minutes. Add the sugar all at once and stir. Bring to a boil. Boil for a minute or two, skimming off the scum. Add the brandy if desired. Pour into prepared jars and process in a water bath for 10 minutes. Let cool for 1/2 hour, then turn the jars upside down to help distribute the pieces of fig evenly throughout the jar.

Give Us This Day

Our daily bread. Simple things like food and shelter and heat that…