I didn’t expect to like this pepper jelly – it’s not the kind of food that normally appeals to me. But I became a convert after one taste on a cracker with goat cheese. There I was at the Trenton Farmer’s market, with a need for only one or two jalapenos.  But when they’re selling whole baskets of the little green beauties for only $1.00, who can resist? Buy now, figure out what to do with them later, I thought. What I thought of was this pepper jelly. Well, actually I found several similar recipes on many internet sites, including Gifts From Your Kitchen, and have made several batches over the years. They make great gifts, once you convince people to try it. Serve it up at your next party beside a log of goat cheese and watch the converts lick it up. I’ve also used it slathered over grilled fish and in this baked chicken, combined with fig jam, dried cranberries orange juice and other ingredients. I was inspired by a recipe on “Christie’s Corner,” but didn’t have all the ingredients called for, so I just substituted what I had on hand. Actually, I’ve been meaning to thin out that cache of jam jars that are taking up too much room in the fridge.  Her recipe also calls for regular balsamic vinegar, but I prefer to use the lighter colored white balsamic vinegar. Pepper Jelly Printer-Friendly Recipe Here 1 cup chopped red bell pepper 1/2 cup chopped jalapeno pepper 5 cups white sugar 1 1/2 cups apple cider vinegar 1 (6 fluid ounce) container liquid pectin Remove stems, veins and most of the seeds of the bell and jalapeno peppers. Use gloves or avoid touching your face after handling peppers. Mince peppers in a food processor (and keep your face away from the opening of the food processor.)
In a 5-quart pot over high heat, combine bell peppers, jalapenos, sugar and vinegar. Bring to a rolling boil; boil for 3 minutes. Remove from heat and cool for 5 minutes. Stirring constantly, add the pectin and let mixture continue to cool for 2 minutes more. Stir for 1 minute. Pour into hot, sterilized jars and top with sterilized lids. Secure lids with bands and allow jars to cool slowly, creating a vacuum seal. ADDENDUM: I forgot to add this when I originally posted this, but a reader, “robbing peter” reminded me so I want you to know to avoid any possible food health safety problems: After I make this jelly,  I ALWAYS process the filled and sealed jars in a large pot of boiling water for at least 10 to 15 minutes. This allows for a vacuum seal to be created. After you take the jars out of the boiling water, you should hear a “pop.” Sometimes this happens immediately – sometimes it takes 15 minutes or more. When you hear that “pop” you’ll see that the jar lid itself has become a little concave, snapping in toward the jelly. That’s when you know you have a vacuum seal. 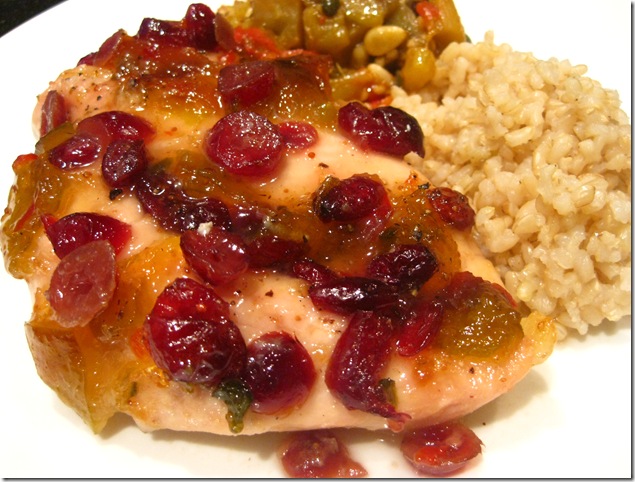 Chicken With Pepper Jelly Printer-Friendly Recipe Here  2 boneless chicken breasts (about 6 – 8 ounces each) 2 T. pepper jelly 2 T. fig jam (If you don’t have fig jam or lemon jelly, use apricot jam or orange marmalade) 2 T. lemon jelly 3 T. white balsamic vinegar 1/4 cup orange juice 1/2 cup white wine salt, pepper 1/2 cup dried cranberries Combine jellies and jams in small saucepan and melt them over low heat. Then add the vinegar and orange juice and cook together for a couple of minutes. Put the chicken breasts into a heat-proof dish, and season with salt and pepper. Sprinkle the cranberries over the top and around the pan, then pour the jelly/vinegar/orange mixture over the chicken breasts. Add the wine and bake in a preheated 350 degree oven for 1/2 hour.

HAPPY THANKSGIVING! If you’ve got any energy or time left before the…