I’ve got another guest blogger for you today and it’s another member of my family who’s a great cook – my son Michael.  When he visits, he’s always generous in helping me out with meal preparation. After years of working beside me in the kitchen as a youngster, he’s grown up to be quite an accomplished cook who has a wide repertoire – from squash gnocchi to braised venison and lots of other dishes in between. He’s also a journalist and a really nice guy (although I’m not prejudiced one bit, right?) . A while back, I promised you a recipe for Limoncello. This is one that my son Michael has been concocting for many years and giving as gifts, and I have to say, it’s better than most of the stuff I’ve tried in Italy. Maybe that’s because it’s made with TLC.  It’s great all by itself, but it’s also wonderful over ice cream, or in recipes like my limoncello frozen yogurt.  So here’s Michael’s guest post: For those of you who don’t know me, I’m the guy in the slideshow over in the column with the slide show on the lower right, cranking the torchio to make pasta.
Believe it or not, this recipe originally came from a dish towel my mom brought back from Italy, and I’ve refined it over the years. 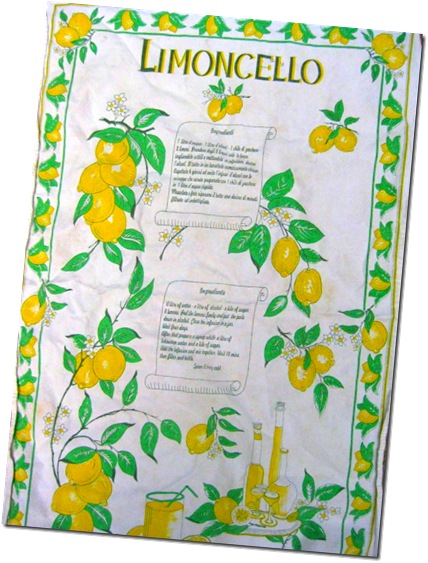 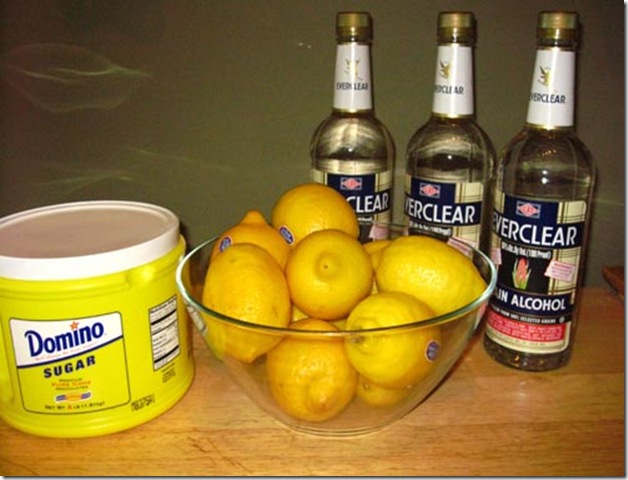 1 liter of grain alcohol (such as Everclear)
1.5 liters of water
Slightly less than 2 pounds of sugar
6 to 8 lemons, peeled I generally only make limoncello in the summer. That’s when I can find lemons at their most yellow. Since the final color of the limoncello will depend on the lemons, select ones that are a nice deep yellow.
Peel the lemons so that only the yellow part comes off. The white pith underneath is bitter. I’ve tried a number of ways to peel the lemons–zesters, graters, etc.–but found that a regular vegetable peeler works best. 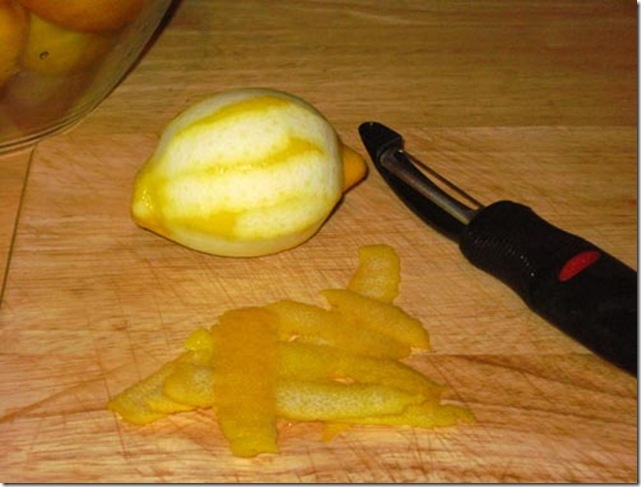 After you’re done peeling the lemons, divide the peels evenly into several mason jars. Pour the alcohol into the jars, seal them up, and put them in a warm dark place.
Let them sit there for about three weeks. About once a week or so, shake the jars gently. 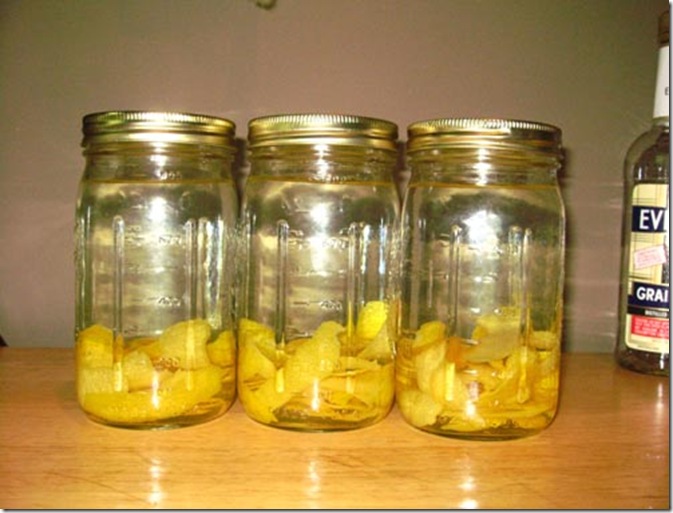 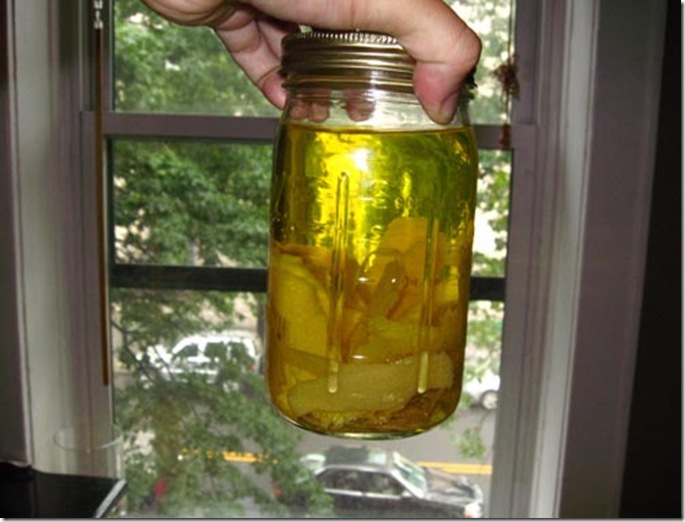 When three weeks have passed, get a large pot, and fill it with 1.5 liters of water. Make sure that there’s plenty of room left over, as you’ll need room for the alcohol. Stir the 2 pounds of sugar into the water to create a simple syrup. Make sure that the sugar is completely dissolved – sometimes it helps to heat the water slightly. 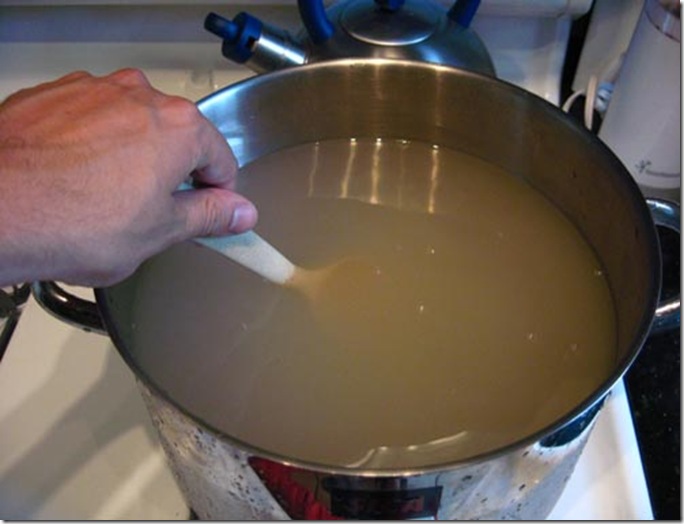 After the sugar is dissolved in the water, strain out the alcohol from the lemon peels, and add to the water. 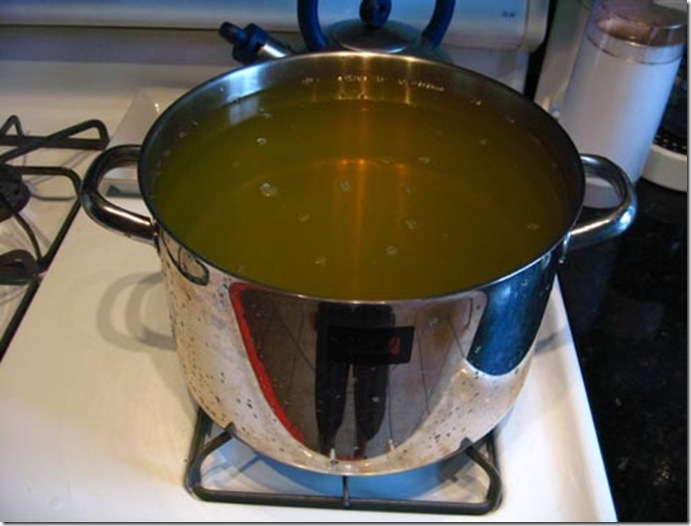 Give it a good stir, and then bottle. Store for another week or two in a warm dark place, and it should be ready to drink. A few notes –
Be sure to have a number of empty bottles on hand – This recipe makes about 3 liters of limoncello.
I use Everclear because it’s nearly 100% alcohol. When you add the water, that results in limoncello that’s about 40% alcohol by volume, which is what you should aim for. I’ve read of other recipes that call for vodka, or some other neutral-flavored alcohol, but never tried them. If you do, you’ll have to reduce the amount of water, because vodka generally has a lower alcohol content.
If you mix the water and sugar before adding the lemon-flavored alcohol to the mix, your limoncello will come out clear. However, if you mix the water and alcohol before adding the sugar, you’ll get a more translucent limoncello.

Book groups are great. You read books you might never have chosen…