When the folks who make Oikos Greek yogurt offered to send me free coupons for their products, I immediately thought of Sandy, one of my journalism professors from graduate school, who passed out empty brown paper sacks on our first day of class. “What are these for?” everybody wanted to know. “They’re for you to pack your lunch so you won’t take any freebies from sources,” he said.  He was steadfast in his insistence that we be beholden to no one in our journalistic endeavors – whether it was writing about the city’s finances or a restaurant’s cuisine. Writing this blog is a far cry from the journalistic dilemmas I faced covering New York City, but still, Sandy came to mind when I debated whether to accept the free coupons. In this case, Sandy would have dismissed my concerns, I’m sure.  I already eat Stonyfield Farm organic yogurt (the company that owns Oikos) nearly every other day for breakfast and would give a thumbs up to their yogurt even without free coupons. As for their Oikos Greek yogurt, I’ve got some good news and some bad news. First the bad news. I don’t like it straight out of the container – the way I eat yogurt in the morning – with fresh berries or other fruit added in. Not even with honey drizzled over the top. I have friends who swear by Greek yogurt in its natural state, but for me, this thick-as-sour-cream yogurt tastes too sour for me. Now the good news – It’s great as the main ingredient in frozen yogurt. I mixed it with strawberries, lemon and sugar and got a delicious alternative to ice cream. I used the nonfat version and didn’t even miss the extra calories. The frozen yogurt  had lots of flavor and none of the guilt. It’s also wonderful for recipes that call for plain yogurt like tzatzaki or baked goods. The frozen yogurt recipe I used comes from another blogger who really knows his way around the kitchen, Kevin of “Closet Cooking.” You’ll need an ice-cream maker for this. I dug out the old Donvier that’s been collecting dust in the basement for decades. It worked so well that I plan to press it into service many more times this summer (with Oikos yogurt). 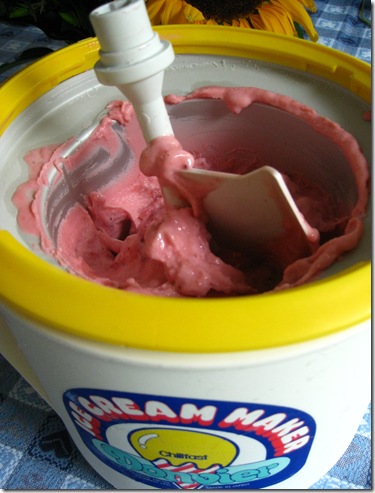 The taste of the strawberry frozen yogurt was really fruity and not cloyingly sweet. It had just enough of a sour tang to make it interesting, but not so much to mask the fruit flavor.  However, after it sat in the freezer a few hours, it was really difficult to scoop out. The next time I make this, I plan to add a little bit of Kirsch or Grand Marnier or some other alcohol. Maybe that will help make it easier to scoop.  It sure can’t hurt the taste.  And I know Sandy would love it. Ingredients:
3 cups strawberries (sliced)
1 lemon (juice)
1 cup sugar
2 cups yogurt
Directions:
1. Heat the strawberries, lemon juice and sugar and stir until the sugar has dissolved.
2. Remove from the heat and mash the strawberries.
3. Let cool then mix in the yogurt and test for sweetness.
4. Chill in the fridge for a couple of hours.
5. Freeze according to the instructions for your ice cream machine.

There are so many reasons I love summer, including the delicious sweet…

Move over potato chips. There's a new kid on the block --…

Have you ever tried bresaola? (pronounced breh-ZOW-la) It may look a little…