Dear Readers: Today I am taking it easy and leaving the writing (and photography) to a guest blogger – my brother Frank. He’s a top-notch mushroom forager, wild-game hunter and deep-sea fisherman – in short, an excellent person to have as a friend (or a brother). His morel mushrooms have already been the subject of a recent post, when I used them in a risotto. This post is a bit longer than my normal ones, but it’s only scratching the surface on wild mushrooms. He’s got lots more information, and he’s a pretty good writer too. I think my brother should start his own blog. Maybe he could call it “Frank Forages”  or “Frank’s Feasts,” or just “Frankly Frank.”  Any ideas? Thanks for reading – Linda Frank’s post starts here: Have you ever heard of a cantharellus cibarius, boletus edulis, morechella esculenta, armillariella mella or a coprinus comatus? Perhaps the term chanterelle, porcini, morels, honey mushroom or shaggy manes may be a little less alien to some of you. Let me start out by saying if you don’t know what you are doing, by all means don’t pick or eat wild mushrooms. Some species are mildly poisonous and one should seek medical attention immediately upon the first symptoms of any gastrointestinal, neurological or muscle aliments after ingestion. A few others are hallucinogenic and some are DEADLY poisonous, including the amanitas shown below. The taste of some of these have been reported by victims to be simply delicious, while having their stomachs pumped out in the local hospital emergency room.

That being said, the common cultivated white mushroom is not even in the same taste league as its wild cousin the agaricus campestris. Once you learn to identify the good from the bad from the ugly you will never look at boring old supermarket mushrooms with the same eyes again. 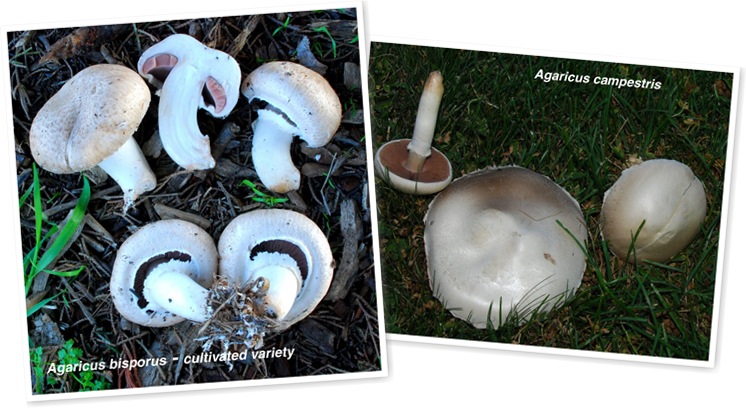 I supplied Linda with a fair quantity of morels I recently picked and dried, and she was good enough to cook them in a risotto that was shared with her family, our father and of course myself. After reading the comments posted about this dish it seems that many of you may have a taste for morechella esculenta “aka” morels or morells (not really sure which is the correct spellings since both are used frequently). 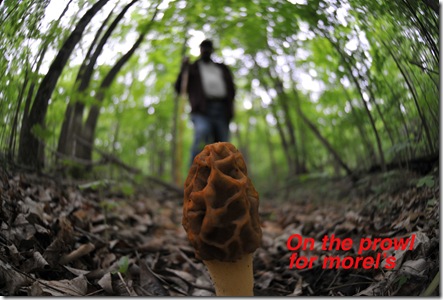 Each Spring I head to my well-guarded spots to gather one of the many free bounties that mother nature has to offer. Note the word free. I have seen dried grade “A” morels on sale from $23/oz to $150/lb. Many attempts have been made to cultivate the morel, but most have proven unsuccessful. Morels, like most mushrooms, are seasonal. Here in the Northeast you have to be in the right place at the right time to find them. We generally start to see them beginning around the middle of April until the middle of May. 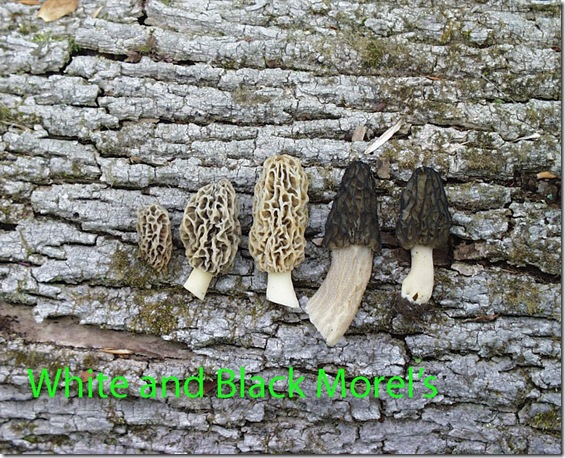 Options to purchase fresh morels are limited, so if you want fresh ones, get your butts into the forest and learn to do the morel stalk, otherwise open your wallets and purchase what you can get for free! But again, I repeat, don’t pick anything to eat if you don’t know what you’re doing. Take someone experienced with you, or search the web for a group that hunts mushrooms near you. Although morels are a tasty treat I think they are rather bland when compared to many other species. The morel has a very delicate taste that tends to take on the flavor of whatever you cook them with. I personally favor a hardier, earthy flavored mushroom that has a character of its own. Take as an example, the king bolete (Boletus edulis). Often times a particular species of mushroom has a regional name that defies description. We Italians know this as the porcini. In the U.K. it’s known as a penny bun. In Germany its call it steinpilz and the French know it as a cep.

Another is the Hen of the Woods (not to be confused with the chicken of the woods, an entirely different species but very tasty) which is often called a rams head in the coal regions of Pennsylvania. The list goes on and on, so it is always good practice to at least try and learn their scientific names as well. 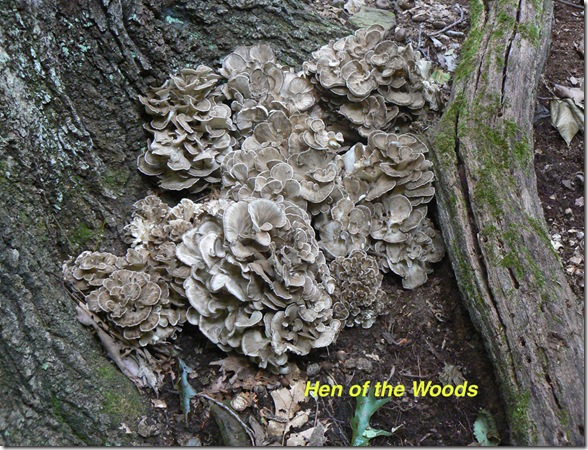 I started foraging for mushrooms when I was a youngster on the heels of my father and grandfather. Their targeted species was usually Hen of the Woods (Grifola frondosa). Because of its spoon-shaped caps it is reminiscent of a fluffed up hen. A fortunate find of the occasional Honey mushroom (Armillaria mellea) was often a bonus. The honey mushroom has a somewhat crunchy and sometimes slippery texture (depending how they are prepared ) with the ever present earthy and a slightly bitter taste. I remember very vividly when our grandmother used to pack them together with tomato sauce in mason jars. 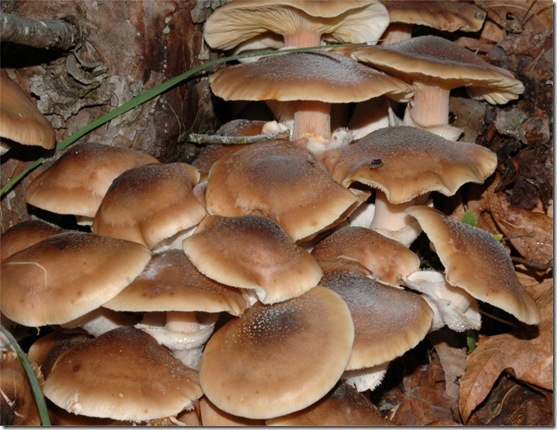 armillaria mellea Our family and all our relatives called the Hen of the Woods a “naschi”. Although I may have spelled it wrong, no one seems to know where the name comes from, so I guess my spelling will hold, at least for now. 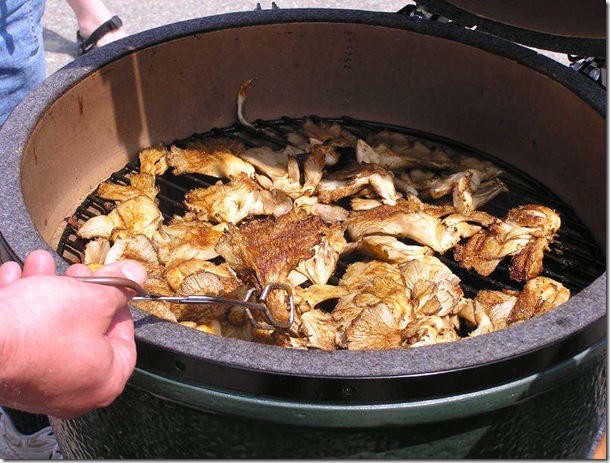 grilled hen-of-the-woods mushrooms Over the past few years the hen of the woods has become a familiar site on the shelves of Giant supermarkets. It’s sold under the name of Matakie. The variety you find in the supermarkets is very small, usually under a pound. They are pitiful in size compared to the wild varieties that often topple the scales at 20 pounds each. Each of the mushrooms I have mentioned has a particular environment and season that it thrives in. For instance the hen of the woods only appears toward the end of the summer and almost always grows at the base of a oak tree. Once you find one, remember the spot since it will continue to produce each fall for years to come. I have one tree in particular that has been productive for ten years now. Morels are a spring time mushroom that can often be found under tulip poplars, elms and ash trees as well as old apple orchards, just to name a few. So far one of the best places I have found them happened to be in section of forest that was ravaged with a forest fire the year before. This may have something to do sterilization and altered ph levels of the soil. Porcinis normally grow in the vicinity of pine trees and can be found from August through November. Chanterelles appear around the same time but most often in hardwood forests. While searching for chanterelles your sense of smell can be as equally as important as you sense of sight. I have often detected the mild fruity and peppery aroma of chanterelles long before they are visibly spotted. Their texture is akin to the familiar cultivated shitake mushroom. It’s without doubt one of my favorites, about three steps down from the porcini. One final thing about the chanterelle – the more mature they become the more prone they are to infested with insect larva. But a little extra protein never hurts. 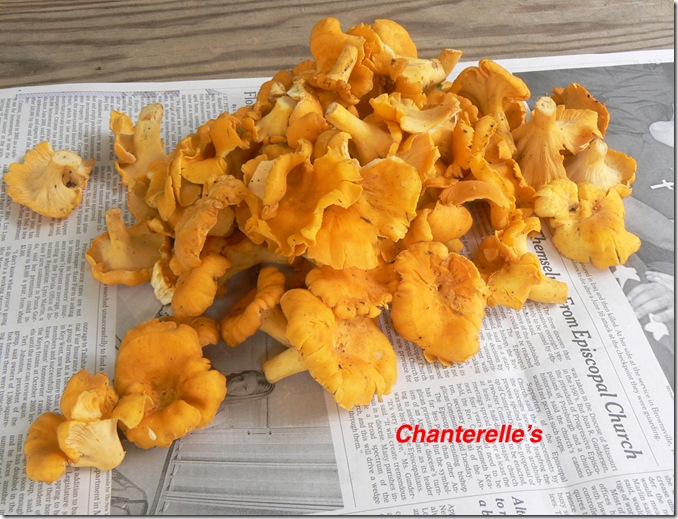 There are a few mushrooms that are very easily identified by the beginning mushroom hunter. Start out by getting a few field guides and then go from there. One book in particular I would highly recommend is “Mushrooms Demystified” by David Arora. It’s a very comprehensive guide to the fleshy fungi. I own many books about mushrooms but this book is without doubt the one I could not do without. It’s more than a thousand pages long with many color plates and descriptions of hundreds of mushrooms. If you have a chance, go to Amazon.com and read the reviews. Here’s what he has to say about the sulphur shelf mushroom. In addition to his thorough description, I would add that I find them to have a slightly earthy, woody flavor. 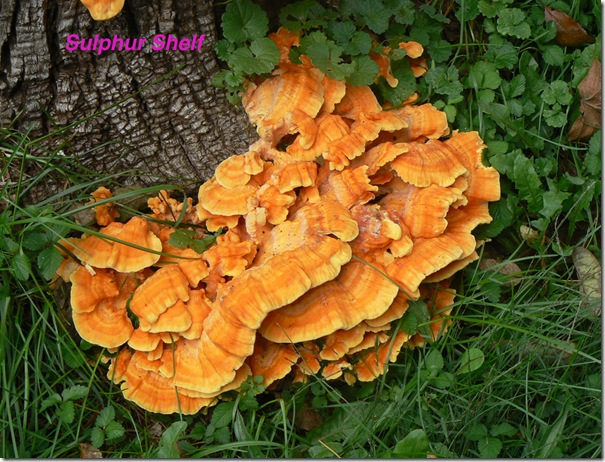 “Edible and delectable when thoroughly cooked. However there have been several cases of sulfur shelf poisoning on the west coast, so try it cautiously the first time, and never eat it raw. When young the succulent flesh has a mild flavor, tofu-like texture and “candy corn like color” making it especially attractive and delicious in omelets. Maturing specimens are tougher and develop a strong sour flavor. Their texture when cooked is reminiscent of white chicken meat, which makes them very good in sandwiches. If the specimens you find are mature (but not so old as to be asbestos-like) you can trim off the sender rapidly growing margin and perhaps return later for more.” Another excellent resource is to start with is the “NAMA” North American Mycological Association. There are also numerous organizations and clubs throughout the country that hold regularly scheduled meetings and forays. If you are into photography I can hardly think of a better subject than the lowly mushroom. They are not camera shy, you can always depend on finding them and they are easy to snap since they don’t move very fast. I literally have hundreds of photographs of numerous species. Their unusual shapes and color make them very interesting subjects, and you never know what you might find perched on one. Happy Hunting. 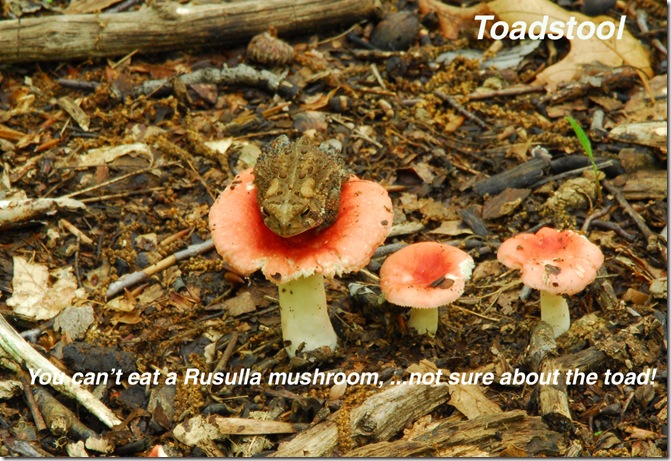 Wake me if you must, but it's been nearly three days and…